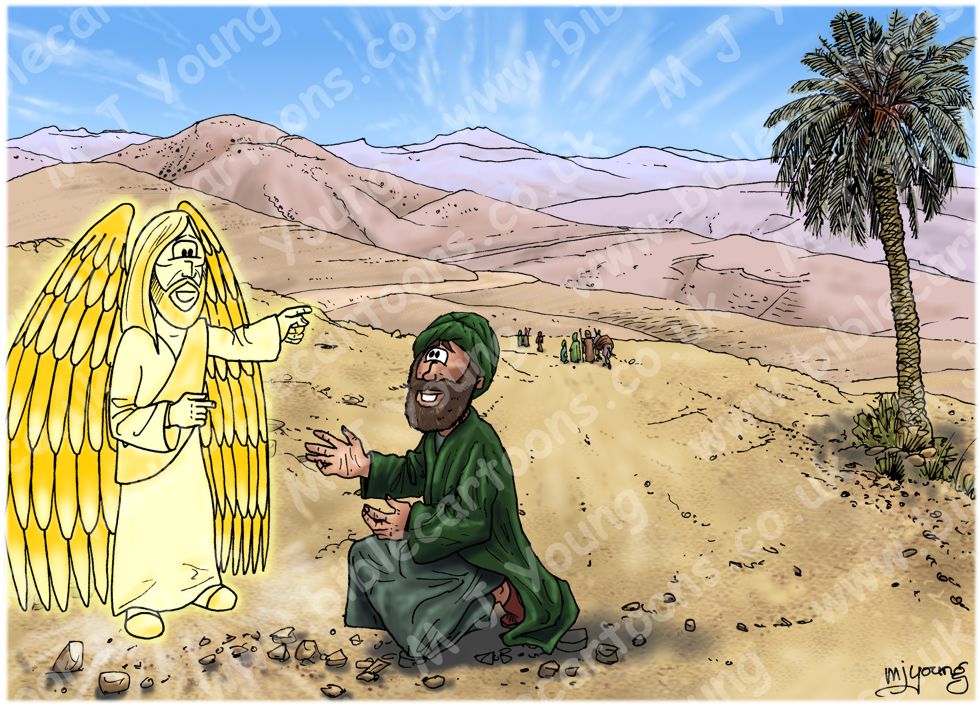 Acts 8:26-28 (NLT)
26 As for Philip, an angel of the Lord said to him, “Go south [1] down the desert road that runs from Jerusalem to Gaza.” 27 So he did, and he met the treasurer of Ethiopia, a eunuch of great authority under the queen of Ethiopia. [2] The eunuch had gone to Jerusalem to worship, 28 and he was now returning. Seated in his carriage, he was reading aloud from the book of the prophet Isaiah.

[2]
Greek, under the Candace, the queen of Ethiopia.

LIGHTING NOTES:
The sun is above the scene, casting shadows below objects & people.
The angel on the left of this scene is a second source of light. Note how it casts shadows that radiate out from it’s base.

CHARACTERS PRESENT:
Angel, with Philip. He is known as Philip the evangelist, as apposed to Philip the Apostle.
Various figures walking down the road.

RESEARCH/ADDITIONAL NOTES:
This is the first in a series of 6 cartoons. Although I actually finished scenes 02-04 before this one!

A geological map of the area north of Hebron reveals the underlying rock types to be limestone, dolostone, marl, chalk & chert. I’ve coloured the rocks in these scenes pale yellow to reflect this. Photographs taken in the area confirm this colouration. 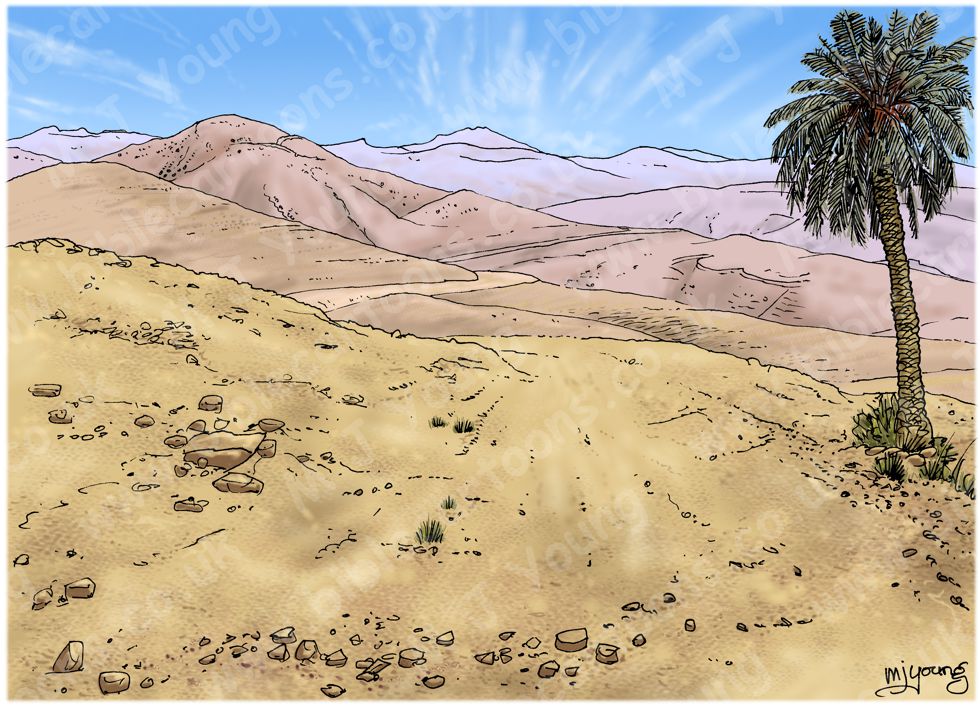 1) Philip the Evangelist
Philip the Evangelist was one of the seven appointed by the apostles to take care of the growing Christian community and to look after their widows and the needy (Acts 6:1-6). He went to Samaria where he preached and performed miracles (Acts 8:4-6). He converted Simon the magician (Acts 8:9-13). Philip received the message from an angel to meet a man from Ethiopia in Gaza, a eunuch of great authority under Queen Candace, and inspired the Ethiopian to be baptized (Acts 8:26-39). Later, Philip lived in Caesarea (Acts 21:8). According to Acts 21:9, Philip’s four unmarried daughters had the gift of prophecy.

2) Philip the Apostle
Philip the Apostle was one of the original twelve apostles. He came from Bethsaida in Galilee. Jesus invited Philip to become His disciple (John 1:43). Philip became the sixth disciple of Jesus, and introduced his friend Nathanael (Bartholomew) to Jesus, who also became an apostle.

When Jesus was about to perform a miracle and feed a multitude of people with a small amount of food, Jesus asked Philip where they should buy the bread to feed the people. But, Jesus was testing Philip, for Jesus already knew that He would perform a miracle (John 6:5-6).

A group of Greek Jews who were in Jerusalem for Passover asked Philip to have him introduce them to Jesus (John 12:20-22). During the Last Supper, Philip asked Jesus to show them the Father (John 14:8-11). Philip was present during the prayer meeting in the upper room with the 120 (Acts 1:13-15), after the ascension of Jesus.
(Source: http://www.aboutbibleprophecy.com/p60.htm)

It should be noted that “Ethiopia” does not refers to modern-day Ethiopia but rather to ancient Nubia, the region from Aswan in southern Egypt to Khartoum in Sudan. The Ethiopian eunuch is described as an important official (a treasurer) in charge of all the treasury of Kandake (aka Candace), queen of the Ethiopians. Candace may have been a title, rather than an individual person, refering to the queen-mother of Egypt. The office of governing Egypt resided in the hands of Candace, for Pharaoh, worshipped as an offspring of the sun, was above such mundane activities as ruling a nation.

It appears that this eunuch was a worshipper of Yahweh, for the Bible says he had been in Jerusalem to worship & was now returning home to Egypt.

It was customary at this time in history to read aloud, hence Philip could have easily heard the portion of Scripture the eunuch was reading.

It is interesting to note that in verse 26 we read that an angel guided Philip, but in verse 29 it is the Holy Spirit who guides him to the chariot, or carriage (see the next scene.) Various Bible translations describe the vehicle the eunuch was riding in as a carriage or chariot.

Possessing a scroll of the OT Scriptures (handwritten and thus rare) also indicated the wealth & or high position of the Ethiopian eunuch.

‘Though Luke gave no record of God’s commanding Philip to preach to the Samaritans (v. 5), God did sovereignly direct Philip toward Gaza (see the map at Acts 9). The highway is referred to as the desert road. The expression may refer to a desert road or a desert city. Ancient Gaza was destroyed in 93 b.c. and the city was rebuilt nearer the Mediterranean in 57 b.c. The old city was called Desert Gaza. The Greek for the angel’s command could be translated, “Arise and go to the south to the road… that goes down from Jerusalem to Gaza. This is desert.” This reference to the road in 8:36 may imply that the road, not the city, was in a deserted area.’
(Source: The Bible Knowledge Commentary: An Exposition of the Scriptures by Dallas Seminary Faculty.)

I have chosen to draw a dry, desert road, winding through a barren landscape, with only scant vegetation visible.
The tree on the right is a date palm (Phoenix dactylifera.)