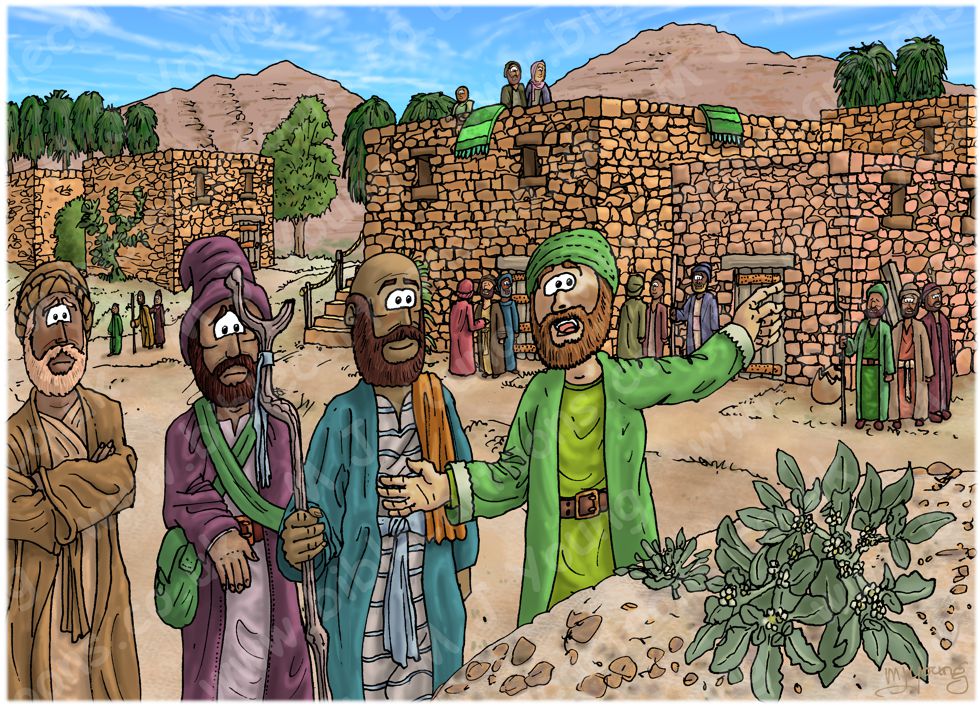 2 Kings 6:1-3 (ANIV)
1 The company of the prophets said to Elisha, “Look, the place where we meet with you is too small for us. 2 Let us go to the Jordan, where each of us can get a pole; and let us build a place there for us to live.”
And he said, “Go.”
3 Then one of them said, “Won’t you please come with your servants?”
“I will,” Elisha replied.

TIME OF DAY:
Unspecified in Bible verses above. I have set this scene in the mid morning.

LIGHTING NOTES:
The sun (unseen, above & right) illuminates this scene, casting shadows to the left of figures & objects.

RESEARCH/ADDITIONAL NOTES:
This scene shows Elisha talking to members of the company of prophets [1], regarding the size of their meeting place. Apparently, Elisha’s many miracles had caused an increase in the number of people wanting to join the company. This is in strong contrast to the other people of Israel, who were generally going over to the idolatry of Baal worship, instead of the proper worship of the Lord God.

There is a strange phrase in verse 2, “…each of us can get a pole.” It is supposed that the company of prophets were proposing to go to the Jordan river, and to cut down trees, to make logs/beams, which could then be used to make a large wooden hut or house, in which they could all meet comfortably. Other Bible translations confirm this interpretation of “pole”, by referring to “logs”, “beams”, etc. 2 Kings 6:2 (The Message Version) gives us a clearer translation: “2 Give us permission to go down to the Jordan where each of us will get a log. We’ll build a roomier place.”

I have used the same colour for the stone buildings as the upper walls of the city of Jericho from Joshua 06 – Fall of Jericho – Scene 03 – Circling Jericho.

The small green plant on the foreground sandy outcrop (and beneath the feet of the foreground figures) is Anastatica hierochuntica (aka the Rose of Jericho, Resurrection plant). This remarkable plant can survive for a very long time in a completely desiccated (apparently dead) state. The true rose of Jericho (Anastatica hierochuntica) is native to western Asia and is the only species of the genus Anastatica of the mustard family (Brassicaceae). The small gray plant curls its branches and seedpods inward in the dry season, forming a ball that opens only when moistened. It can survive for years in that form, though it is sometimes uprooted and blown by the wind like a tumbleweed. If still rooted when moistened, it spreads into a green plant up to 1 foot (30 cm) wide and bears minute white flowers, with yellow centres.

[1]
The Blue Letter Bible translates the term into “The sons of the prophets”. 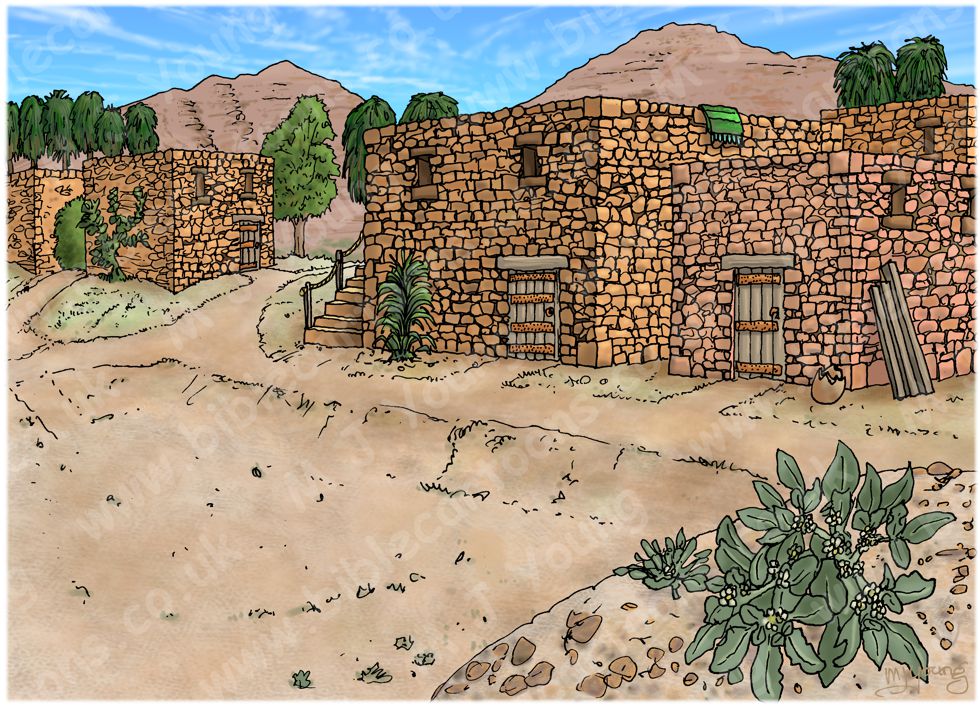