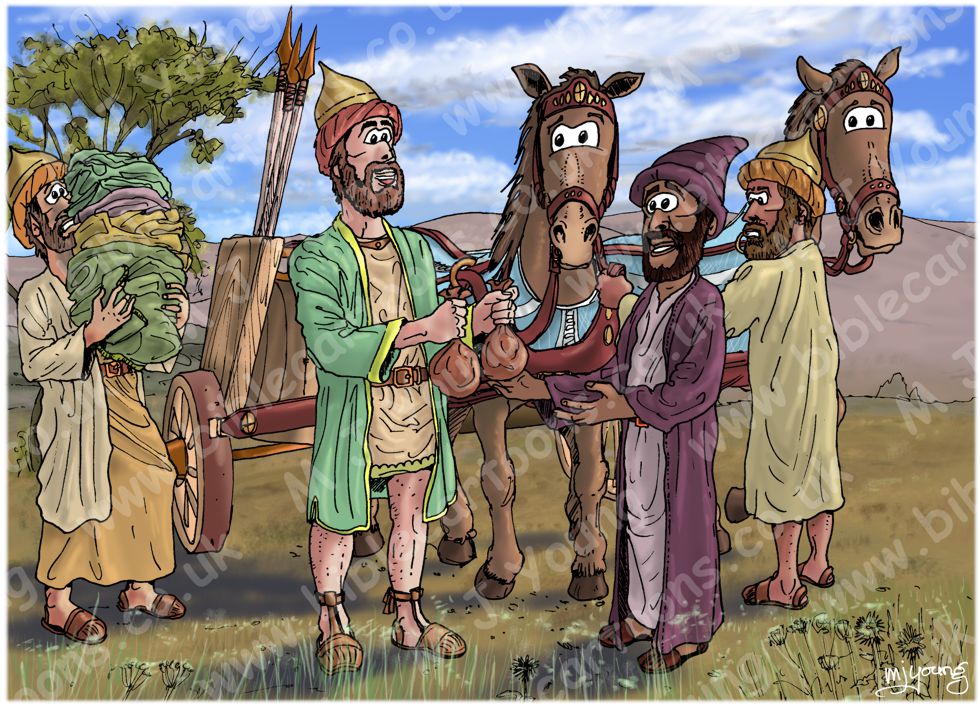 2 Kings 5:19-24 (ANIV)
19 [“Go in peace,” Elisha said.]
After Naaman had travelled some distance, 20 Gehazi, the servant of Elisha the man of God, said to himself, “My master was too easy on Naaman, this Aramean, by not accepting from him what he brought. As surely as the Lord lives, I will run after him and get something from him.”
21 So Gehazi hurried after Naaman. When Naaman saw him running towards him, he got down from the chariot to meet him. “Is everything all right?” he asked.
22 “Everything is all right,” Gehazi answered. “My master sent me to say, ‘Two young men from the company of the prophets have just come to me from the hill country of Ephraim. Please give them a talent [1] of silver and two sets of clothing.’ “
23 “By all means, take two talents,” said Naaman. He urged Gehazi to accept them, and then tied up the two talents of silver in two bags, with two sets of clothing. He gave them to two of his servants, and they carried them ahead of Gehazi. 24 When Gehazi came to the hill, he took the things from the servants and put them away in the house. He sent the men away and they left.

TIME OF DAY:
The exact time of day is not mentioned in the Bible account.
If Naamam’s encounter with Elisha, and his journey to the River Jordan, washing, healing, return to Elisha, conversation and departure, all occurred on the same day, then I image quite a lot of time would have elapsed since dawn. The narrative also tells us that Gehazi ran to meet up with the Aramean after he (Naaman) had travelled “some distance”, all of which adds some time to the events. I therefore image it might be mid to late afternoon when this scene takes place.

LIGHTING NOTES:
The afternoon sun illuminates this scene, from right to left.

RESEARCH/ADDITIONAL NOTES:
I have drawn both Gahazi and Naaman I previous scenes, so used the skin, hair, and clothing colours I established in those scenes, in this one, to maintain continuity between stories/scenes.

I used some reference photographs for the design of the Aramean chariot Naaman was riding in. I also found some photo reference of the landscape around Samaria to help me create the background scenery. Apparently Elisha settled in Samaria after spending some time before on Mount Carmel.

Based on that calculation there is no way that Naaman can be carrying 2 talents of silver in the 2 bags he is handing over to Gehazi, more likely he has lots of bags to make up that amount of weight!