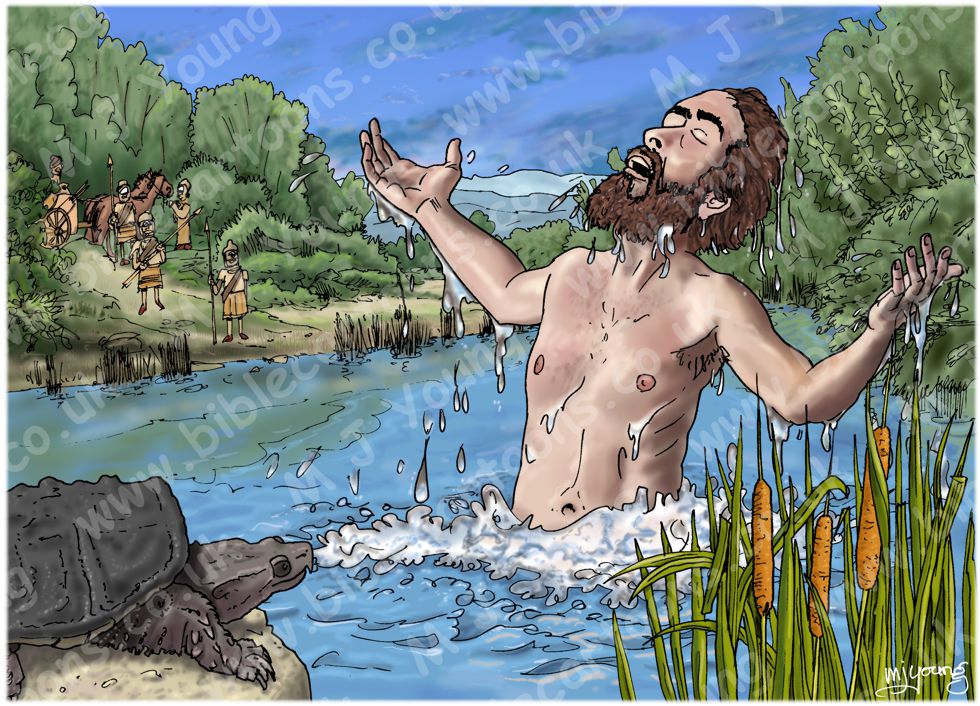 2 Kings 5:13-14 (ANIV)
13 Naaman’s servants went to him and said, “My father, if the prophet had told you to do some great thing, would you not have done it? How much more, then, when he tells you, ‘Wash and be cleansed’?” 14 So he went down and dipped himself in the Jordan seven times, as the man of God had told him, and his flesh was restored and became clean like that of a young boy.

TIME OF DAY:
Unspecified in Bible. I have drawn this scene early in the morning.

LIGHTING NOTES:
There is weak early morning sunlight illuminating this scene, from the left.

CHARACTERS PRESENT:
Naaman is the man coming up out of the water of the Jordan river. On the far left hand river bank you can see some of Naaman’s soldiers, with his chariot. In the left foreground is a Common snapping turtle.

RESEARCH/ADDITIONAL NOTES:
Verse 1 of 2 Kings chapter 5 states that Naaman had leprosy, while the footnote for that verse adds that the Hebrew word for leprosy (tsâra?, tsaw-rah’; to scourge, i.e. (intransitive and figurative) to be stricken with leprosy:—leper, leprous) was used in reference to various diseases affecting the skin, not necessarily leprosy itself.

I researched which lizards might be found in the river Jordan area of Israel, so that I could illustrate a species that would probably have ben found there at the time of Naaman’s visit.
[See source: http://jordanrivercommission.com/wp-content/uploads/2011/04/Reptiles-of-the-Jordan-River-2011.pdf]

I discovered that the Common snapping turtle (Chelydra serpentina) can be found in the Jordan river valley, so I decided to include that as some foreground interest.

The plants in the right foreground are Bulrush (aka Southern Cattail, Narrowleaf Cattail (Typha domingensis)) which is a common plant in the Jordan Valley. It flowers in summer, prefers humid habitats & can be found in the following ecological regions of Israel: Mediterranean Woodlands and Shrublands, Semi-steppe shrublands, Shrub-steppes, Deserts and extreme deserts, Montane vegetation of Mt. Hermon.

It occurs to me that Naaman’s miraculous healing from his leprosy, by washing himself in water, might be associated with later Christian baptism. That might be a stretch of implication though! In any case, the fact that Naaman obeyed God’s instruction (via Elisha) and acted in faith is probably the significant aspect of this story.


Bible Doctrine Notes
5:9-15 PRAYER, Intercession (5.54E)
Although intercession is available for all races and nations, it must nevertheless be done in God’s way. Both Elijah & Elisha performed miracles involving Gentiles. Elijah was sent by God to Sidon, a Gentile nation, to provide for the widow of Zerephath during a famine (see 1 Kings 17:9-14). In Luke 4:24-27, Jesus pointed out this miracle, & referred to the healing of Naaman through Elisha. Naaman was required to acknowledge the sovereignty of the God of Israel, rather than put his trust in pagan gods.

5:14 ORDINANCES, Form of Baptism (5.21C)
In the Septuagint (the Greek translation of the Old Testament) that was produced before the time of Jesus, the word baptizo (baptise) is used to describe Naaman’s submergence in the river waters. In the Old Testament such dippings had religious significance, and so influenced the later practices of John the Baptist and Christian baptism. 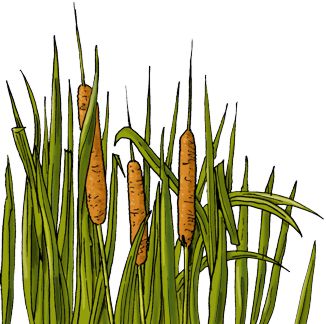