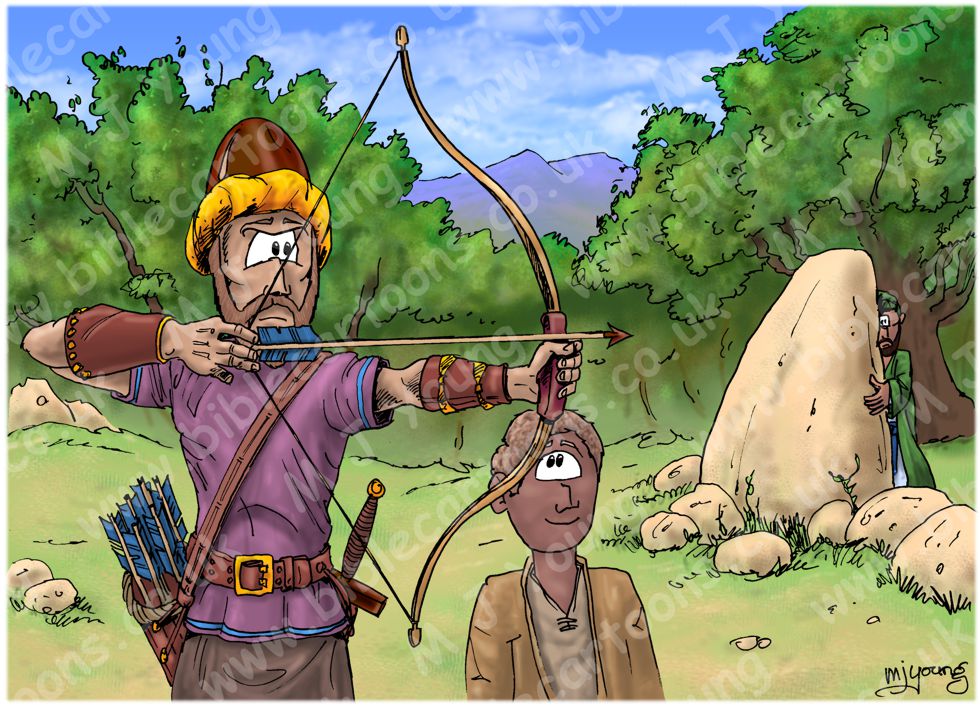 1 Samuel 20:35-36 (NLT)
35 The next morning, as agreed, Jonathan went out into the field and took a young boy with him to gather his arrows. 36 “Start running,” he told the boy, “so you can find the arrows as I shoot them.” So the boy ran, and Jonathan shot an arrow beyond him.

TIME OF DAY:
Daytime, the exact time is unspecified in the Bible text.

LIGHTING NOTES:
There is general sunlight from above in this scene.

RESEARCH/ADDITIONAL NOTES:
This scene shows Jonathan (the eldest son of King Saul) about to shoot an arrow. You can see the young boy by his side who was tasked with fetching the arrows, & David in hiding, behind the large stone to the right of the scene.

1 Samuel 20:1-42 (ANIV) [Jonathan speaking to David] ‘The day after tomorrow, towards evening, go to the place where you hid when this trouble began, and wait by the stone Ezel.’

The International Standard Bible Encyclopedia has this to say about the stone:
“(‏הָאָזֶל‎, hā-ʾāzel; Septuagint παρὰ τὸ ἐργὰβ ἐκεῖνο, pará tó ergáb ekeíno): As it stands, the narrative in 1 Samuel 20:19 records the tryst of Jonathan with David at the stone Ezel. The name occurs only here. There is general agreement that the text is corrupt, but there is no agreement as to how it should be restored. The Septuagint reads “this mound” (the Revised Version (British and American), margin), or “yonder cairn”; and in 1 Samuel 20:41 instead of “out of a place toward the South” it reads “from beside the mound” or “cairn.” Dr. Cheyne suggests “yonder juniper tree” (Encyclopaedia Biblica, under the word).”

“Ezel
A separation, (1Sa 20:19), a stone, or heap of stones, in the neighbourhood of Saul’s residence, the scene of the parting of David and Jonathan. The margin of the Authorized Version reads, “The stone that sheweth the way,” in this rendering following the Targum.”
(Source: Illustrated Bible Dictionary: And Treasury of Biblical History, Biography, Geography, Doctrine, and Literature.)

Geology
The geological map of the area of Gibeah shows the area to be dominated by limestone; I have coloured the rocks in my picture a pale cream yellow colour.