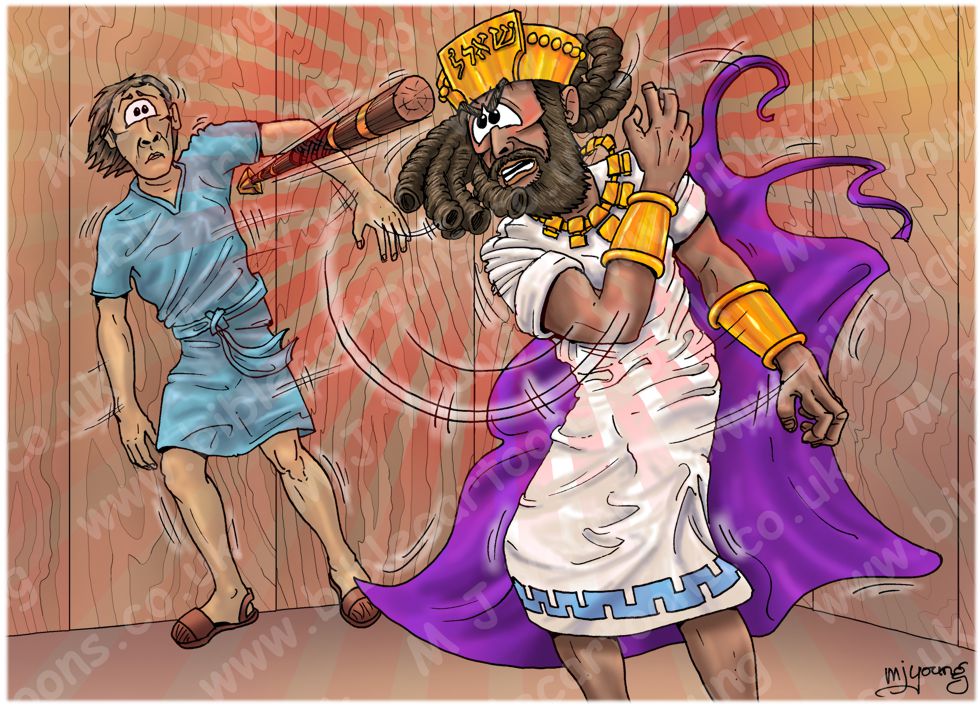 1 Samuel 18:10-11 (NLT)
10 The very next day a tormenting spirit [1] from God overwhelmed Saul, and he began to rave in his house like a madman. David was playing the harp, as he did each day. But Saul had a spear in his hand, 11 and he suddenly hurled it at David, intending to pin him to the wall. But David escaped him twice.

TIME OF DAY:
Daytime, but unspecified in the Bible quote above.

LIGHTING NOTES:
Warm yellow torch light comes from above in this scene.

RESEARCH/ADDITIONAL NOTES:
This scene was originally drawn for a “bad Day” mug design, but I have decided to put it in the Bible Cartoon collection as well.

Saul skin, hair & clothing colourings & designs are taken from a previously drawn scene (1 Samuel 17 – David & Goliath – Scene 08 – Saul’s armour) which was the first time I had ever drawn Saul. That scene includes his golden crown with the word “Saul” embossed in Hebrew script.

I used a special effect in Corel PhotoPaint to create the red zig zap lines behind Saul, which are intended to give a sense of his radiating anger & ravings.


Bible Doctrine Notes
18:10 EVIL AND SUFFERING, Divine Origin (2.31A)
[Same note as 1 Samuel 16:13-23]
The Bible holds to monotheism, the belief in a single God. In the time of Saul and David that truth separated Israel from their surrounding neighbours who believed in a pantheon of many gods.
Monotheism forces believers to account for evil and suffering in light of the one true God as well. God allows evil to exist. The spirit is the power that drives a person’s will and emotions. True life, under God, exists when a person allows God’s Holy Spirit to control and direct their life choices. Other wise evil controls the person. Ultimately, in a world with only one God, even an evil spirit must logically be a part of that God’s creation. In the case of king Saul, God used an evil spirit to punish an unfaithful, disobedient member of God’s people. To speak of an evil spirit from God does not lessen the moral responsibility of the person it influences/affects nor does it place moral blame on God. The evil spirit’s influence was evidenced by king Saul’s depression, violent mood swings, and irrational threats. The evil spirit still remains under God’s control.