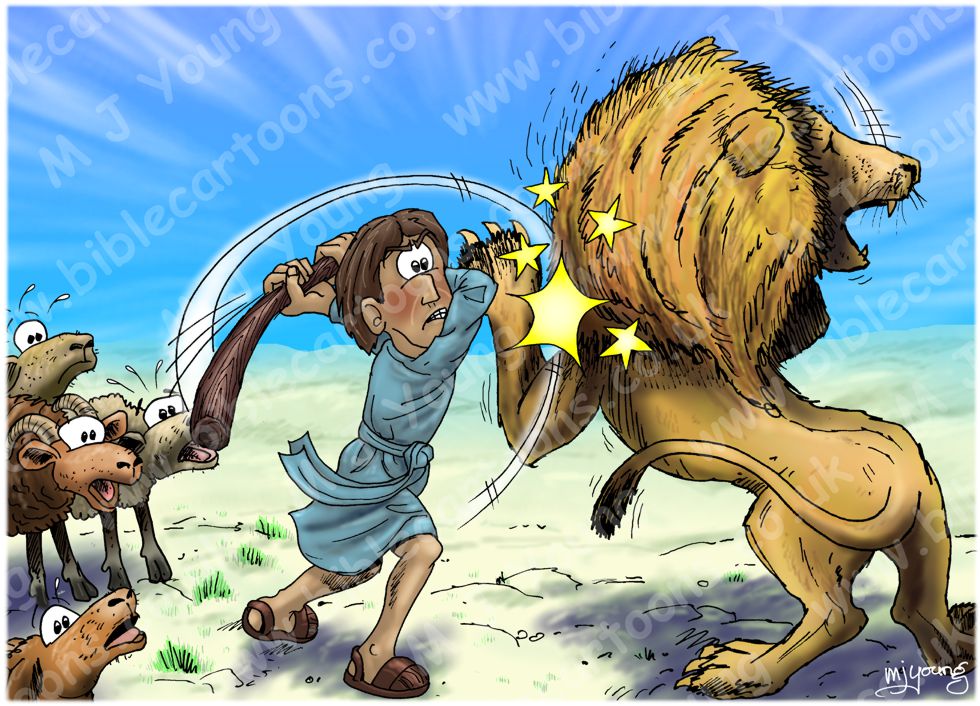 David kills Goliath
32 “Don’t worry about this Philistine,” David told Saul. “I’ll go fight him!”
33 “Don’t be ridiculous!” Saul replied. “There’s no way you can fight this Philistine and possibly win! You’re only a boy, and he’s been a man of war since his youth.”
34 But David persisted. “I have been taking care of my father’s sheep and goats,” he said. “When a lion or a bear comes to steal a lamb from the flock, 35 I go after it with a club and rescue the lamb from its mouth. If the animal turns on me, I catch it by the jaw and club it to death. 36 I have done this to both lions and bears, and I’ll do it to this pagan Philistine, too, for he has defied the armies of the living God! 37 The Lord who rescued me from the claws of the lion and the bear will rescue me from this Philistine!”
Saul finally consented. “All right, go ahead,” he said. “And may the Lord be with you!”

LIGHTING NOTES:
Sun is high in the sky, casting shadows below the figures.

RESEARCH/ADDITIONAL NOTES:
This is a scene where David is telling Saul of his exploits as a shepherd, protecting his father’s flock of sheep from predators. David mentions two animals in the narrative that he successfully defends the sheep against, lions & bears. In this scene we see David clubbing a male lion. I drawn a full grown male lion in my cartoon illustration. I expect it would be even larger than I have drawn it though!

RESEARCH/ADDITIONAL NOTES:
The clouds are my interpretation (& simplification!) of a lovely cumulus cloud bank over the village were I live in April 2012.

The clothing of David was designed when I did the original 5 cartoon illustrations for David & Goliath in 2009. In this scene & the next one (1 Samuel 17 – David & Goliath – Scene 07 – David and the lion) I have shown David in a long sleeved tunic, whereas in the other, earlier cartoons I have drawn him in short sleeves.


Bible Doctrine Notes
17:37-54 HISTORY, Deliverance (3.32D)
It is not human strength, but rather God’s presence, which determines the outcome for God’s people. Both lions and bears would have been stronger than the shepherd boy David, yet, with God’s help, he prevailed against both. God can use a few people to overcome a mighty army (as Gideon showed in Judges chp 7). No human can compel God to deliver. God acts as He chooses.

17:37 SALVATION, As Deliverance (4.24D)
The same God who delivered the shepherd boy David from the lion, bear and Philistine giant can deliver us from every foe we face.