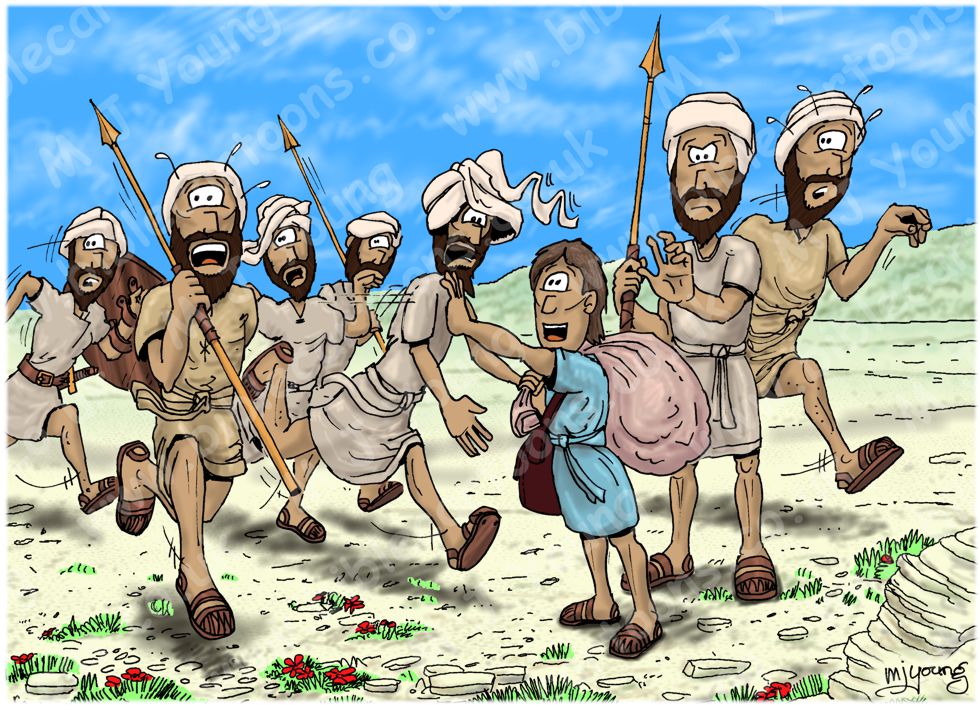 1 Samuel 17:24-27 (NLT)
24 As soon as the Israelite army saw him, they began to run away in fright. 25 “Have you seen the giant?” the men asked. “He comes out each day to defy Israel. The king has offered a huge reward to anyone who kills him. He will give that man one of his daughters for a wife, and the man’s entire family will be exempted from paying taxes!”
26 David asked the soldiers standing nearby, “What will a man get for killing this Philistine and ending his defiance of Israel? Who is this pagan Philistine anyway, that he is allowed to defy the armies of the living God?” 27 And these men gave David the same reply. They said, “Yes, that is the reward for killing him.”

RESEARCH/ADDITIONAL NOTES:
We know from the scriptures that Jesse & therefore David were from Bethlehem, which is about 15 miles east of the Elah Valley, where the confrontation between David & Golaith took place.

The scene is set amongst the Israelite ranks, with David stopping a soldier (amongst many) who are frightened by Golaith & running away (verse )
Verse 24 states that the Israelites started to run away in fright, which I thought might make an interesting & amusing cartoon!


Bible Doctrine Notes
17:26,36 GOD, Living (1.12A)
There is a fundamental difference between the God of Israel and all other gods. The God of Israel is the living God (as we read David describing Him in verse 26 above) – all others are the products of human imaginations and hands. Only the living God is able to accomplish His purposes in Israel and in the rest of the world.

17:26 SIN, Against God (2.51F)
Military strength, human willfulness and physical strength can not win the right to defy God. The Israelite soldiers cringed in fear at the sight of the giant Goliath, but God found resources to punish this defiant Philistine sinner in the form of a young, obedient shepherd boy called David. The Israelite soldiers should have trusted their mighty God – so must God’s people in all ages and generations.