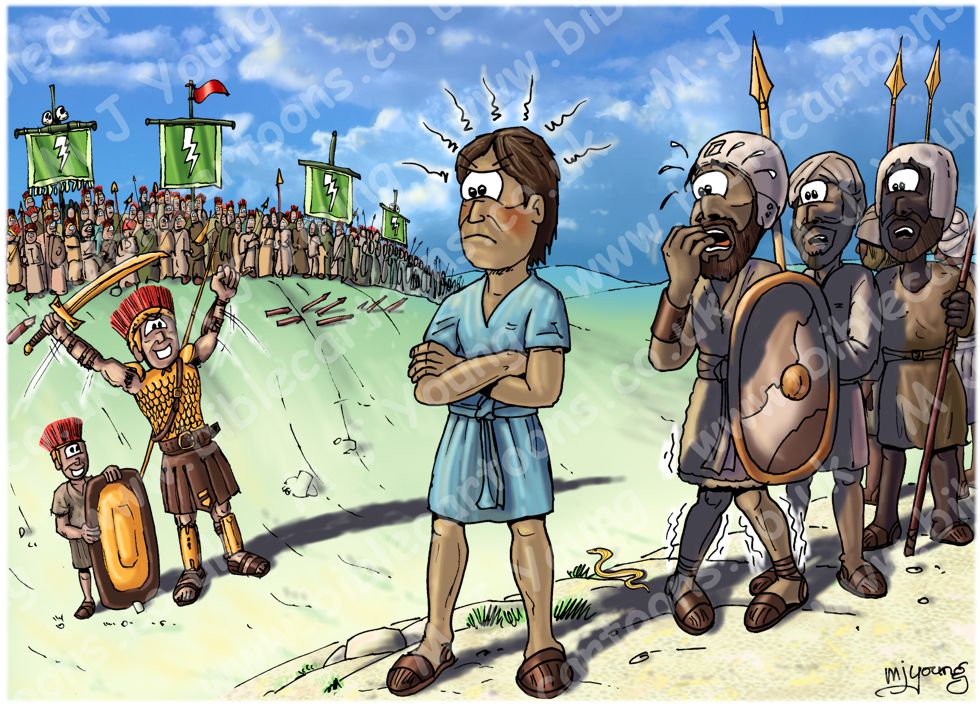 1 Samuel 17:20-23 (NLT)
20 So David left the sheep with another shepherd and set out early the next morning with the gifts, as Jesse had directed him. He arrived at the camp just as the Israelite army was leaving for the battlefield with shouts and battle cries. 21 Soon the Israelite and Philistine forces stood facing each other, army against army. 22 David left his things with the keeper of supplies and hurried out to the ranks to greet his brothers. 23 As he was talking with them, Goliath, the Philistine champion from Gath, came out from the Philistine ranks. Then David heard him shout his usual taunt to the army of Israel.

DRAWING NOTES:
The scene is just within the tent of Saul.

RESEARCH/ADDITIONAL NOTES:
Saul gives David his own armour. Saul was described as being a head taller than anyone else (1 Samuel 9:2) & David at this time was only a boy, therefore I have made Saul’s armour way too big for David to wear! The bronze helmet is similarly oversized. I found reference photo’s of bronze to help me select appropriate colours.

Note: I wanted the helmet’s design to reflect Saul’s status as king, & decided to use a flower & leaf pattern that represents the plant Frankinsence. That plant’s resin was & is highly prized in the Middle East. It is used in worship & so I thought it might represent Saul’s kingly status.

Notice David’s sling & shepherds bag by his side.

Saul has his name (Sha’uwl) embossed on his crown in Hebrew text.