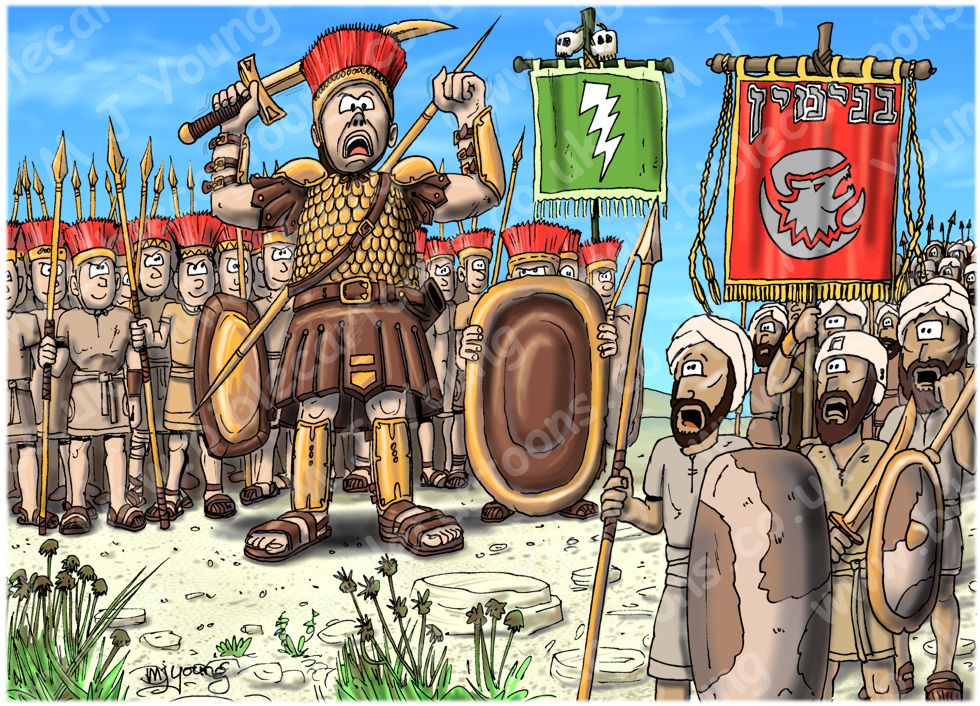 1 Samuel 17:1-11 (NLT)
Goliath challenges the Israelites
1 The Philistines now mustered their army for battle and camped between Socoh in Judah and Azekah at Ephes-dammim. 2 Saul countered by gathering his Israelite troops near the valley of Elah. 3 So the Philistines and Israelites faced each other on opposite hills, with the valley between them. 4 Then Goliath, a Philistine champion from Gath, came out of the Philistine ranks to face the forces of Israel. He was over nine feet tall! [1] 5 He wore a bronze helmet, and his bronze coat of mail weighed 125 pounds. [2] 6 He also wore bronze leg armor, and he carried a bronze javelin on his shoulder. 7 The shaft of his spear was as heavy and thick as a weaver’s beam, tipped with an iron spearhead that weighed 15 pounds. [3] His armor bearer walked ahead of him carrying a shield.
8 Goliath stood and shouted a taunt across to the Israelites. “Why are you all coming out to fight?” he called. “I am the Philistine champion, but you are only the servants of Saul. Choose one man to come down here and fight me! 9 If he kills me, then we will be your slaves. But if I kill him, you will be our slaves! 10 I defy the armies of Israel today! Send me a man who will fight me!” 11 When Saul and the Israelites heard this, they were terrified and deeply shaken.

CHARACTERS PRESENT:
Goliath, his shield bearer & the Philistine army on the left. Some Israelites from their army on the right.
Note, I have not shown Saul, or David in this scene.

RESEARCH/ADDITIONAL NOTES:
The confrontation between Israel & the Philistines takes place in the valley of Elah (1 Samuel 17:1)
Looking at the geological map of this area: apart from alluvium (gravel, sand, clay) the region is composed of chalk. This is confirmed by photographs of the area seen on the internet.
I’ve elected to draw chalk under the feet of the characters in my cartoons.

‘The valley gets it name from the Elah tree, a type of oak or terebinth tree. This large and old Elah tree still remains in the valley, reminding visitors of the day when trees proliferated in the Shephelah (cf. 1 Kings 10:27)’
(Source: http://www.bibleplaces.com/elahvalley.htm)

Notice that I have chosen a low (worm’s eye) perspective for this scene, in order to make Goliath appear very tall, since he was over 9 feet tall, according to scripture (1 Samuel 17:4.) The low vantage point also reflects the fear that the Israelites were experiencing (verse 11) – under such circumstances they may have felt that they were very small & that their enemies (the Philistines) were “larger than life.” That’s the perception I am trying to show in these cartoons.

Google earth co-ordinates & orientation.
When looked at the valley & its surrounding hills on Google earth I have to admit it wasn’t that impressive! The site I eventually chose for the back drop of my cartoons is at the western end of the valley. 31 deg 41 ‘ 24.45” N 34 deg 56’ 38.34” E Looking NNW. Other people seem to put the battle further east of my site, but the valley is low & wide, & isn’t very interesting to look at from that vantage point!

In the photograph I used to give me foreground interest (2011871580034582620YBZSOO_fs.jpg), there are some dried grasses which grabbed my attention. Unfortunately I can’t identify which species they are, but the seed pods look good!

I have managed to find a few photographs of wall carvings that show what the Philistines looked like. I would have liked to have researched their language & drawn characters from their alphabet on their green war banner. However, there appears to be very little evidence of what their written language was like. I decided, in the end, to represent them using a lightning bolt on their banner.

We know that Saul was a descendant of Benjamin from scripture (1 Samuel 9:1-2.) I have been working on designing family & clan banners recently. I decided to use the Benjamin banner design for Saul’s own banner, seen amongst his troops on the field of battle. Benjamin is described by his father Jacob as a wolf that prowls (Genesis 49:27.)

What was a soldier’s javelin used for?
In the Bible description of Goliath (see above) there is reference to a javelin strapped to his back. I was wondering what a javelin was used for, other than throwing at the enemy! There is an interesting description of the specific purpose of using a javelin in “De Re Militari”. Although this referes to a Roman legion, the purpose of the weapon probably remains the same:
‘Conventionally, the javelins would be thrown to disable the shields of the enemy before engaging in close combat, for which the gladius [short sword] would be drawn.’
(Source: “De Re Militari” (Latin. “Concerning Military Matters”) by the late-Latin writer Publius Flavius Vegetius Renatus.)

The javelin would have been thrown before a soldier closed in for hand-to-hand combat. Javelins were thus thrown at an enemy, in the hope of cleaving, or splitting that enemy’s shield & rendering that particular protection useless.


Bible Doctrine Notes
17:1-58 CHRISTIAN ETHICS, War and Peace (4.44G)
David’s young, unquestioning faith in the God of Israel could achieve extraordinary results. People and nations who reject God and defy Him, will face His judgement. At this time in history, when God revealed Himself through one nation, He revealed His power and exercised His punishment through the means of human warfare. Even in warfare He worked through dedicated persons who trusted Him completely to make His sovereign power clear to all nations.