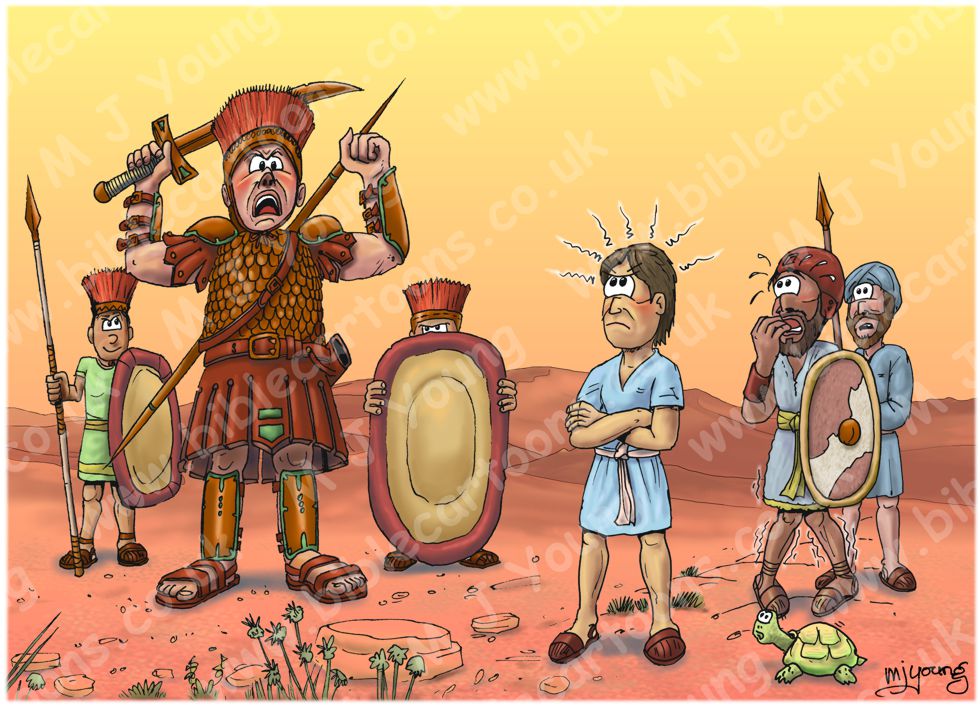 1 Samuel 17:1-11 (NLT)
Goliath challenges the Israelites
1 The Philistines now mustered their army for battle and camped between Socoh in Judah and Azekah at Ephes-dammim. 2 Saul countered by gathering his Israelite troops near the valley of Elah. 3 So the Philistines and Israelites faced each other on opposite hills, with the valley between them. 4 Then Goliath, a Philistine champion from Gath, came out of the Philistine ranks to face the forces of Israel. He was over nine feet tall! [1] 5 He wore a bronze helmet, and his bronze coat of mail weighed 125 pounds. [2] 6 He also wore bronze leg armor, and he carried a bronze javelin on his shoulder. 7 The shaft of his spear was as heavy and thick as a weaver’s beam, tipped with an iron spearhead that weighed 15 pounds. [3] His armor bearer walked ahead of him carrying a shield.
8 Goliath stood and shouted a taunt across to the Israelites. “Why are you all coming out to fight?” he called. “I am the Philistine champion, but you are only the servants of Saul. Choose one man to come down here and fight me! 9 If he kills me, then we will be your slaves. But if I kill him, you will be our slaves! 10 I defy the armies of Israel today! Send me a man who will fight me!” 11 When Saul and the Israelites heard this, they were terrified and deeply shaken.

RESEARCH/ADDITIONAL NOTES:
This scene is an amalgamation of two others I have drawn (1 Samuel 17 – David and Goliath – Scene 01 – Goliath jeers & 1 Samuel 17 – David and Goliath – Scene 03 – Goliath boasts) & has just been finished (Nov 2015) as 1 of 4 pictures for a local school. I was commissioned to produce 4 canvases that show the school values: Excellence, Respect, Inclusion & Aspiration. This scene depicts Aspiration, namely David’s to defeat Goliath! Whilst the Hebrew soldiers are looking at Goliath & being intimidated by his great size, they have forgotten the God they serve & how much larger, greater & more powerful He is when compared to the giant. David has his “spiritual eyes” on God, who is much larger than Goliath, & so David is not intimated by the Philistine giant.


Bible Doctrine Notes
17:1-58 CHRISTIAN ETHICS, War and Peace (4.44G)
David’s young, unquestioning faith in the God of Israel could achieve extraordinary results. People and nations who reject God and defy Him, will face His judgement. At this time in history, when God revealed Himself through one nation, He revealed His power and exercised His punishment through the means of human warfare. Even in warfare He worked through dedicated persons who trusted Him completely to make His sovereign power clear to all nations.