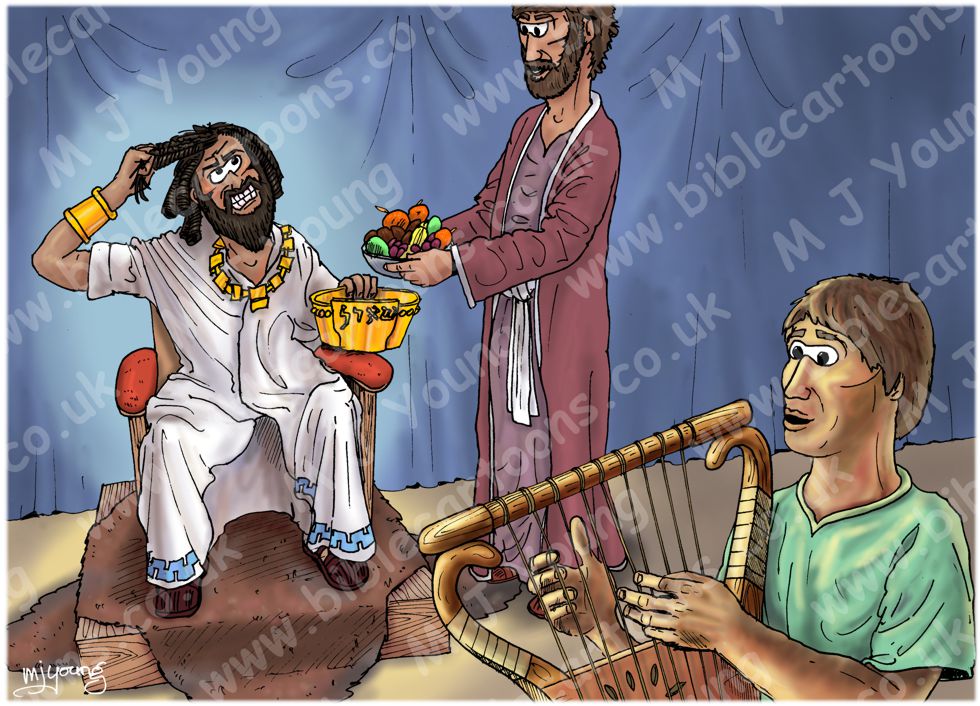 1 Samuel 16:21-23 (NLT)
21 So David went to Saul and began serving him. Saul loved David very much, and David became his armor bearer.
22 Then Saul sent word to Jesse asking, “Please let David remain in my service, for I am very pleased with him.”
23 And whenever the tormenting spirit from God troubled Saul, David would play the harp. Then Saul would feel better, and the tormenting spirit would go away.

LIGHTING NOTES:
This scene is inside Saul’s throne room (I’m assuming he had one!) in the capital of Israel. I have deliberately show Saul in dim lighting, as a representation of his failing mental health and subjection to an evil spirit that plagues him. We know from the Bible narrative that David supplants Saul as king of Israel in later chapters. In contrast to Saul’s diminishing favour with God, I have shown David (playing the harp in the foreground) in brighter light (coming from the left) which represents his rise in popularity and power to come.

CHARACTERS PRESENT:
Saul (pulling his hair as he is being tormented by an evil spirit), a servant offering him fruit in a bowl, a youthful David, playing the harp.

RESEARCH/ADDITIONAL NOTES:
This is a fairly simple design, but the lighting notes I mentioned above transform it into a much more interesting picture.


Bible Doctrine Notes
16:13-23 EVIL AND SUFFERING, Divine origin (2.31A)
The Bible holds to monotheism; that there is only one God. This fact distinguished the people of Israel from all their neighbours. It also forces God’s people to explain we evil we encounter in terms of that one God who rules His creation, which means God permits evil to exist. The spirit is the power that drives a person’s will and emotions. When a person allow’s God’s Holy Spirit to control life, true life under God results. Otherwise, evil controls that person. In a world where there is only one God, that evil spirit must also, logically, be part of God’s creation. In this case, God used the evil spirit to punish a disobedient king of Israel. To speak of an evil spirit neither lessens human responsibility for sin, nor places any moral blame on God. The evil spirit remained under God’s ultimate control. The evil spirit was evidenced in king Saul’s violent threats, depression, jealousy and irrational behaviour.