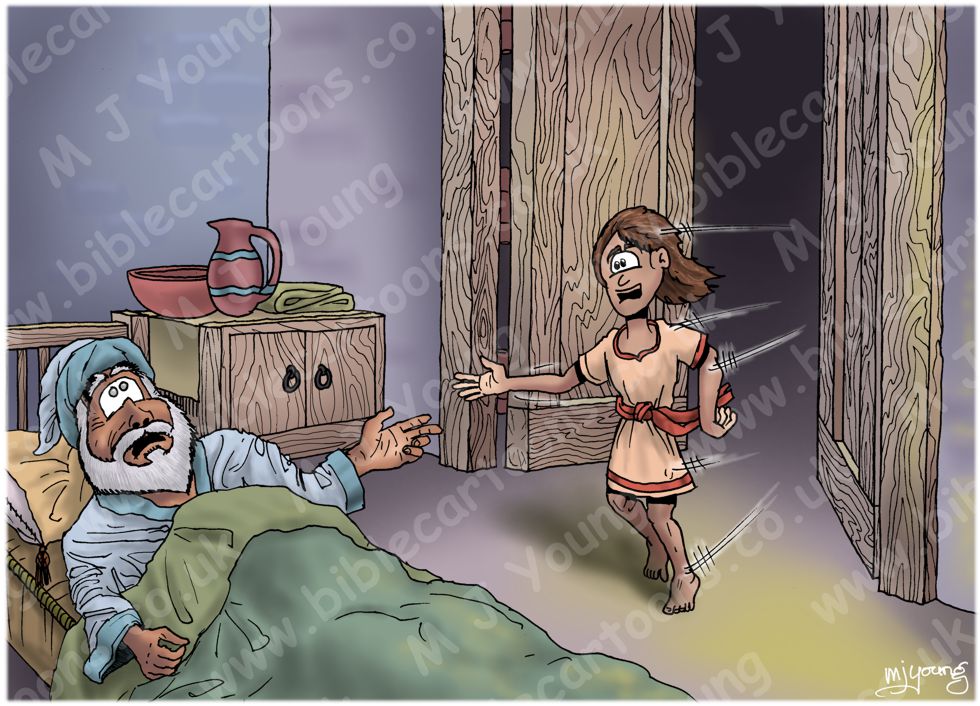 [1]
As in Greek version; Hebrew reads, his sons have made themselves contemptible.

TIME OF DAY:
Night. Verse 3 (see previous scene) states, ‘The lamp of God had not yet gone out,…’ It is likely that the lamp burnt all night, from dusk til dawn, so it may have been at some time before dawn that the Lord called Samuel.

LIGHTING NOTES:
The light of a candle or torch (unseen, off to the right of the scene) illuminates the figures & bedroom of Eli.

CHARACTERS PRESENT:
Eli, in bed. Eli was the high priest, & descended from Aaron through Ithamar (see Leviticus 10:1-2, 12). Verse 2 tells us that Eli was nearly blind; I have shown him with grey eyes, looking up towards the ceiling.
Samuel running in, thinking that Eli has called him.

RESEARCH/ADDITIONAL NOTES:
At this time in the history of the Hebrew people they were making annual visits to a place called Shiloh to worship the Lord. However there is some uncertainty about what they visited there. Some bible translators refer to “The Tabernacle”, whilst others refer to “The Lord’s temple”, “God’s Temple”, or “The Temple of Jehovah”. In the Hebrew bible, the word “hêkal” is used to describe this building, a term meaning palace, temple, nave, hall or sanctuary. Some commentators assert that it was the Tabernacle, or tent of God, as built by Moses in Exodus. Others suggest it was a more permanent structure. The term Hebrew word “hêkal” that is found describing the “Temple of Jehovah” at Shiloh (where this story takes place) is never used of the fabric tabernacle or tent of meeting. The structure at Shiloh clearly had doors (Hebrew: deleth) (see 1 Samuel 3:15) and doorposts (Hebrew: mĕzuwzah, doorpost or gatepost) (see 1 Samuel 1:9) terms which are never used of the flaps of a tent. This would seem to indications that the “Temple of Jehovah” at Shiloh may have been a wooden structure, or perhaps a stone structure with wooden doors & doorposts.

I have decided to illustrate a more permanent temple building in my cartoon, based on the arguments in the above document. My picture shows Eli in his bed, in a wood & stone building, representative of priestly apartments adjoining the Temple building itself. Young Samuel has been woken by a voice, & thinking it was Eli calling him, he has run from the Temple, through these large double wooden doors into Eli’s room.

The rest of the verses above show that it was not Eli calling the boy, but The Lord Himself.


Bible Doctrine Notes
3:1-10 REVELATION, Word (3.21E)
The child Samuel was called when God did little communicating with His people. God’s revelation came in the last moments of the night, in the tabernacle, were He had spoken many times before. As Eli’s apprentice and dedicated to God from birth (see 1 Samuel 2:2-21) Samuel slept in the sacred tent. A dream-revelation is suggested by the text. Only with Eli’s help did Samuel realise that 3 times God had spoken to him. God can give his prophetic word to people of all ages. The person being spoken to by God may need advice to correctly discern God’s voice and will. calling comes in God’s time and in His way; not every generation has the same number of revelations.

3:1-19 EVANGELISM, Obedience (6.12D)
When God calls us our best response is obedience, which is also essential in the task of evangelism. The doctrine of evangelism demands obeying God as He commits to us the task of witnessing. We are God’s servants, which means delivering God’s word, even if it is a difficult one to deliver, as in Samuel’s case to Eli.

3:7 SALVATION, Definition (4.21)
Saving knowledge is revealed by God through his written and living Word. Intimate knowledge of God is necessary for salvation, rather than the accumulation of facts. God takes the initiative in making Himself known to people.

3:12-14 GOD, Wrath (1.14H)
The sacrificial system instigated by God was never meant to provide atonement for deliberate sinning amongst the Hebrew people. God told Samuel that no atonement can ever overcome the effects of continual, willful, deliberate sin. If such sins were ever to be forgiven, it could only be by the grace of God. In fact, all forgiveness achieved by sacrificing came through the grace of God, not the sacrifices themselves. The sacrificial system God provided was the method used to seek forgiveness from sins. Forgiveness of sins only comes from God, and only to those people who are repentant, approaching God in a sincere quest for forgiveness. That was what the son’s of Eli seemed to be lacking.

3:13 SIN, Punishment (2.55B)
Only God’s punishing intervention can rescue God’s people from some leaders of religious institutions. Eli’s sons openly and willfully violated God’s instructions (see 1 Samuel 2:22-25, 29). Eli instructed them to stop their sinning, but they would not. Thus God intervened to punish them. Human mediation can not avert punishment for flagrant rebellion and sin against God. Righteous parents can not prevent their unrighteous offspring from receiving punishment for their sins.

3:14 SALVATION, Atonement (4.23A)
Samuel’s hard message from God to Eli was that the high priests sins would never be atoned for by sacrifice or offering. God is free to refuse to cover over the sins we try to cover up. When sin becomes a habit, and people refuse to repent and seek forgiveness for those sins from God, people can not expect forgiveness. There is no atonement for unbelief.