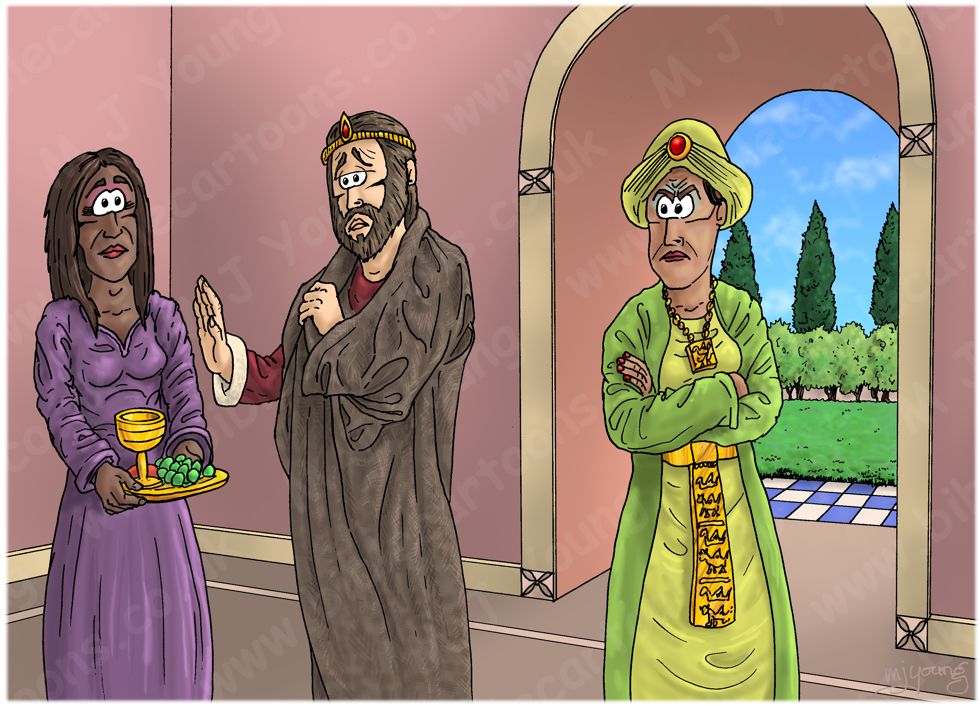 1 Kings 21:27-29 (ANIV)
27 When Ahab heard these words, he tore his clothes, put on sackcloth and fasted. He lay in sackcloth and went around meekly.
28 Then the word of the Lord came to Elijah the Tishbite: 29 “Have you noticed how Ahab has humbled himself before me? Because he has humbled himself, I will not bring this disaster in his day, but I will bring it on his house in the days of his son.”

TIME OF DAY:
Unspecified in the Bible verses above. I have set this scene in the mi afternoon.

LIGHTING NOTES:
This scene is set inside. General sunlight filters into the scene from small windows set high up in the walls, creating indirect light, & producing dim shadows to the left of objects & figures.

CHARACTERS PRESENT:
From left to right: a serving girl, offering wine & fruit to king Ahab. Jezebel (the wife of Ahab) is on the right, looking disdainfully at her husband.

RESEARCH/ADDITIONAL NOTES:
This scene is set inside king Ahab of Israel’s palace, in the city of Jezreel. Ahab is wearing sackcloth, a very coarse, rough fabric woven from flax, hemp or goat hair. Sackcloth was worn in Biblical times as a token of mourning by the Israelites, to show a publicly expression of sorrow or regret for having done something wrong. It was also a physical expression of grief and self-humiliation (see 2 Kings 19:1) as well as submission (see 1 Kings 20:31-32). Sackcloth was occasionally worn by the Prophets. Often sackcloth was worn, and dust or ashes were poured over the wearers head, which also denoted grief, mourning, humility & repentance.

Verse 27 tells us that Ahab fasted (went without food), as an additional expression of his mourning for his own wrongdoing. Ahab’s fasting is visually represented in this scene by the interaction with a servant girl who is offering the king fruit & a goblet of wine, which he is refusing (with upheld hand) to accept.

I have drawn Jezebel looking at her husband with disdain & annoyance. No doubt she didn’t approve of his repentance upon hearing the Lord God’s judgement against him, as delivered by Elijah the prophet (see verses
20-26). As ever, Jezebel is wearing the lime green clothes I draw her in, which is a visual representation of the poisonous, toxic influence she had on king Ahab & the Israelites.

I have used the same wall & wall decoration & colouring I used in the previous scene “1 Kings 21 – Naboth’s Vineyard – Scene 03 – Jezebel’s scheme”, to maintain design continuity between these pictures. 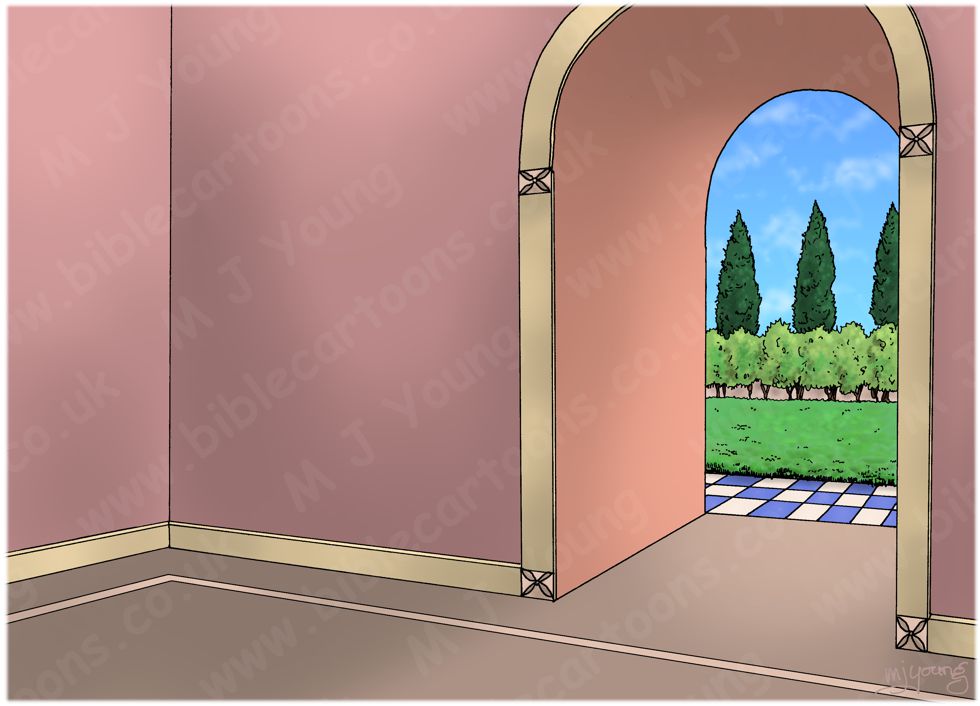