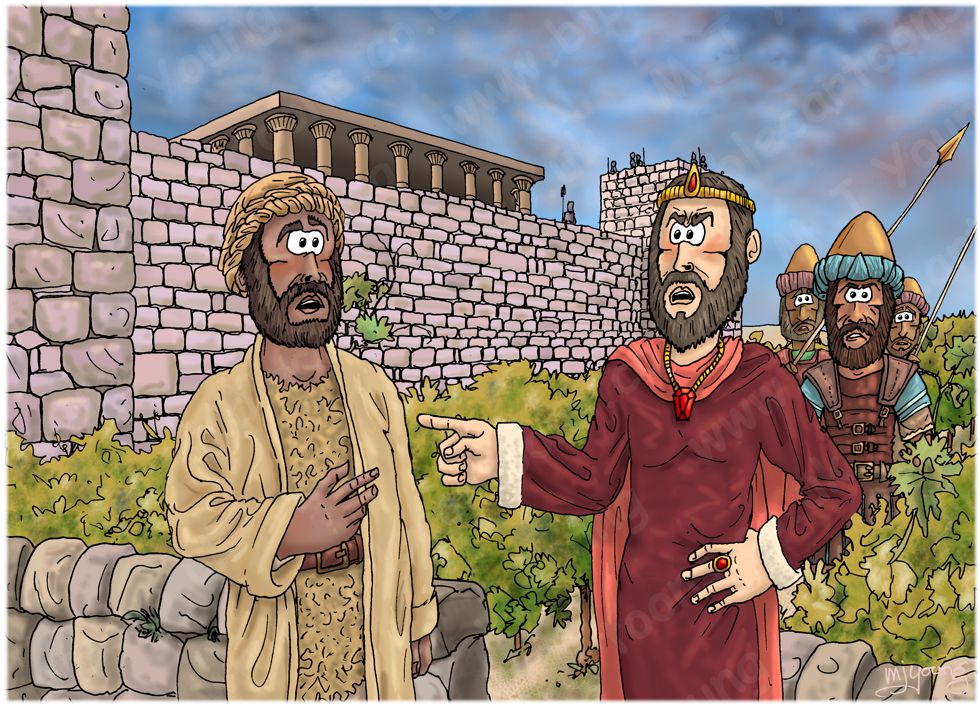 1 Kings 21:20-26 (ANIV)
20 Ahab said to Elijah, “So you have found me, my enemy!”
“I have found you,” he answered, “because you have sold yourself to do evil in the eyes of the Lord. 21 ‘I am going to bring disaster on you. I will consume your descendants and cut off from Ahab every last male in Israel—slave or free. 22 I will make your house like that of Jeroboam son of Nebat and that of Baasha son of Ahijah, because you have provoked me to anger and have caused Israel to sin.’
23 “And also concerning Jezebel the Lord says: ‘Dogs will devour Jezebel by the wall [1] of Jezreel.’
24 “Dogs will eat those belonging to Ahab who die in the city, and the birds of the air will feed on those who die in the country.”
25 (There was never a man like Ahab, who sold himself to do evil in the eyes of the Lord, urged on by Jezebel his wife. 26 He behaved in the vilest manner by going after idols, like the Amorites the Lord drove out before Israel.)

TIME OF DAY:
Unspecified in Bible narrative above. I have set this scene at mid morning.

LIGHTING NOTES:
The sun (over head) illuminates this scene, through dark clouds, so there are only vague shadows to the left of objects & figures.

CHARACTERS PRESENT:
Elijah is on the left, talking to Ahab the king of Israel (the figure in red).
Behind Ahab is Jehu (who later become the king of Israel), who is the man in a conical bronze helmet with blue turban. Behind him on the left is Bidkar, who became Jehu’s chariot officer, when he became king.
The other man is an un-named soldier.

RESEARCH/ADDITIONAL NOTES:
I have used the same background in this Bible Cartoon as in “1 Kings 21 – Naboth’s Vineyard – Scene 01 – King Ahab’s offer”. Notice the clouds which are stormier than in scene 01. They are providing a red tinge to the walls of the city, the vineyard, etc.

Elijah is rebuking king Ahab for allowing his wife, Jezebel to the murder Naboth. In the very piece of ground which the king had coveted and (through Jezebel’s action) seized, the prophet appeared to declare the end of Ahab’s reign, life & dynasty. Attending Ahab was a captain named Jehu, who would become God’s instrument or vengence on Ahab, & who was chosen to replace Ahab as king. This fact was not unoticed by Jehu (see 2 Kings 9:25-26) [1].

Ahab had made himself the enemy of the Lord and His people by doing evil in the eyes of the Lord God. God promised to bring disaster on Ahab personally and to destroy his descendants; Ahab would have to stand alone without allies. As for Jezebel, Elijah correctly predicted her death & that dogs would eat her by the wall of Jezreel; a terrible but deserved end to a thoroughly evil, manipulative queen (see 2 Kings 9:35-37). Apparently, wild dogs lived off the rubbish in twons & cities such as Jezreel.

Verses 25-26 give the writer of 1 King’s own assessment of the character & nature of king Ahab, who was unique in his wickedness. He sold himself to do evil in the Lord’s eyes (see verse 20). Jezebel urged him on in evil, being devoid of any spiritual sensitivity or conscience. In pursuing idolatry Ahab behaved in the vilest manner by following the sinful ways & practices of the Amorites whom we know from the Bible God had driven out of the Holy Land when the Israelites entered it in Joshua’s day (see Joshua 10:12-13).

[1]
2 Kings 9:25-26
25 Jehu said to Bidkar, his chariot officer, “Pick him up and throw him on the field that belonged to Naboth the Jezreelite. Remember how you and I were riding together in chariots behind Ahab his father when the Lord spoke this prophecy against him: 26 ‘Yesterday I saw the blood of Naboth and the blood of his sons, declares the Lord, and I will surely make you pay for it on this plot of ground, declares the Lord.’[a] Now then, pick him up and throw him on that plot, in accordance with the word of the Lord.”

Why not visit my website & see all the cartoons there? http://www.biblecartoons.co.uk