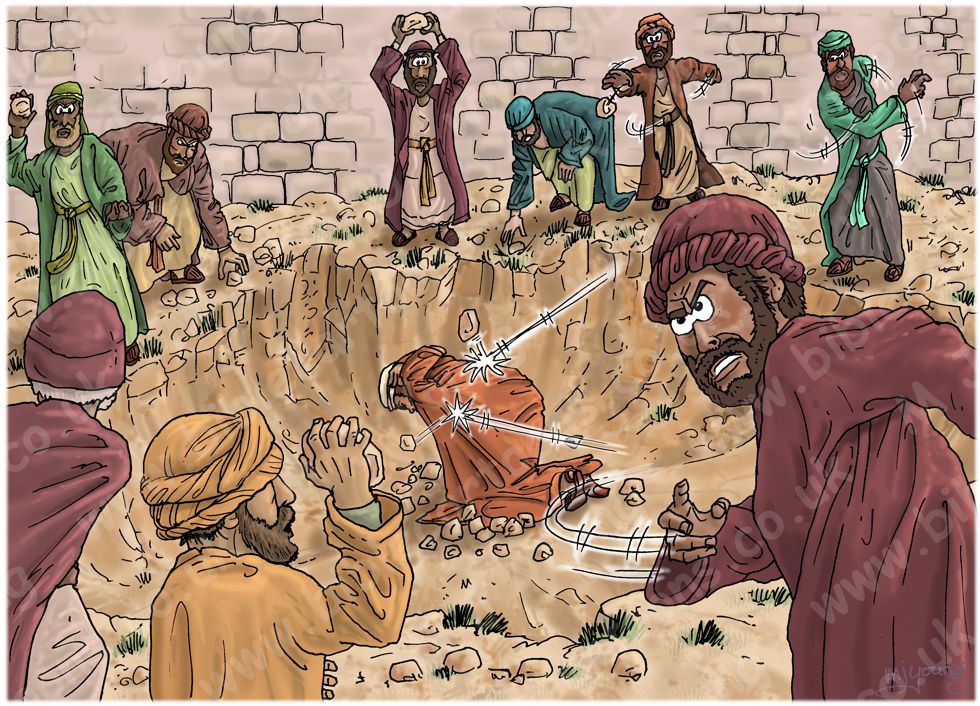 1 Kings 21:13-16 (ANIV)
13 [Then two scoundrels came and sat opposite him and brought charges against Naboth before the people, saying, “Naboth has cursed both God and the king.”] So they took him [Naboth] outside the city and stoned him to death. 14 Then they sent word to Jezebel: “Naboth has been stoned and is dead.”
15 As soon as Jezebel heard that Naboth had been stoned to death, she said to Ahab, “Get up and take possession of the vineyard of Naboth the Jezreelite that he refused to sell you. He is no longer alive, but dead.” 16 When Ahab heard that Naboth was dead, he got up and went down to take possession of Naboth’s vineyard.

TIME OF DAY:
Unspecified in the Bible. I imagine it might have been late morning.

LIGHTING NOTES:
The sun is high overhead & to the right. Strong, direct sunlight can be seen on figures and buildings, with shadows to the left.

CHARACTERS PRESENT:
Naboth is in the centre of an old stone quarry.
Various elders, nobles & men from the city where Naboth lived, throwing stones at Naboth.

RESEARCH/ADDITIONAL NOTES:
This picture shows Naboth being stoned to death by the elders and nobles of the city, on the written orders of Jezebel. It wasn’t a very nice scene to have to draw, but it is the outcome of Jezebel’s deadly plan to give Naboth’s vineyard to her husband, king Ahab, and so I had to draw it.

The 3 men in the foreground are all from the previous scene. From left to right: the man with pale hair, a purple outer robe & turban, and pale inner robe is one of the men sitting at the table (in scene 04), facing the viewer. The man in pale brown outer robe, with green inner robe & brown hair (in the picture above) can be seen walking in the background of scene 04. The man on the right of the picture above, in purple outer robe & throwing a stone at Naboth, is the man in scene 04 who is sitting at the table (side view), sitting next to Naboth.