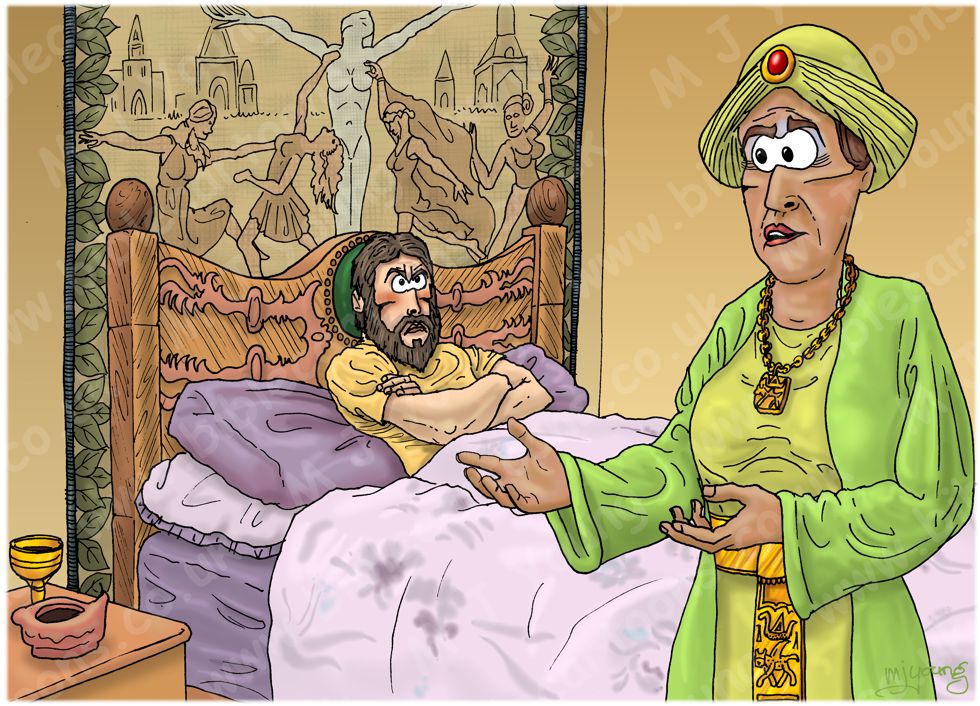 1 Kings 21:4-7 (ANIV)
4 So Ahab went home, sullen and angry because Naboth the Jezreelite had said, “I will not give you the inheritance of my fathers.” He lay on his bed sulking and refused to eat.
5 His wife Jezebel came in and asked him, “Why are you so sullen? Why won’t you eat?”
6 He answered her, “Because I said to Naboth the Jezreelite, ‘Sell me your vineyard; or if you prefer, I will give you another vineyard in its place.’ But he said, ‘I will not give you my vineyard.’ “
7 Jezebel his wife said, “Is this how you act as king over Israel? Get up and eat! Cheer up. I’ll get you the vineyard of Naboth the Jezreelite.”

CHARACTERS PRESENT:
Ahab – son of Omri, king of Israel is the man in bed.
Jezebel, his wife, stands to the right of the scene.

RESEARCH/ADDITIONAL NOTES:
This scene is set in Ahab’s bedchamber. We see him in the middle of his bed, arms folded and with an expression of sulking bad humour on his face. His Siodonian wife, Jezebel, stands to the side of his bed, her expression is one of mockery, as she goads him with the words, “Is this how you act as king over Israel?” Then she tells her husband that she will get him Naboth’s vineyard… the scene is set for an innocent’s murder.

I first drew Jezebel in January 2016, with the scene “1 Kings 17 – Elijah fed by ravens – Scene 01 – No rain”. I decided then to draw her wearing a sickly green coloured dress and turban. The choice of colour reflecting Jezebel’s poisonous character & toxic effect on the king (Ahab) & the nation of Israel.

I decided to put an ornate woven tapestry on the wall above Ahab’s bed. I reasoned that Ahab joined his wife in worshipping the “gods” of the Sidonians, so I researched them. I discovered that Ahab & Jezebel worshipped the goddess Asherah. This would have been done by erecting an Asherah pole, which was a carved pole or sacred tree, which stood on a high place/hill. In the tapestry we can see one such tree of pole in the centre of the scene, with four women dancing around it. There are buildings in the background, and a leaf motif along the left & right margins. The tapestry is indicative of the idol worship both Ahab & Jezebel indulged in, & which they led Israel into during their lives.

The symbol of the Mesopotamian storm god Adada was a ship and a leonine (resembling a lion) dragon. Adad roughly equates with the later Phoenician storm god Baal. Jezebel was infamous for promoting Baal worship in Israel at this time. I have designed a gold necklace & gold belt for Jezebel, which have this winged lion/dragon & ship symbolism on them.