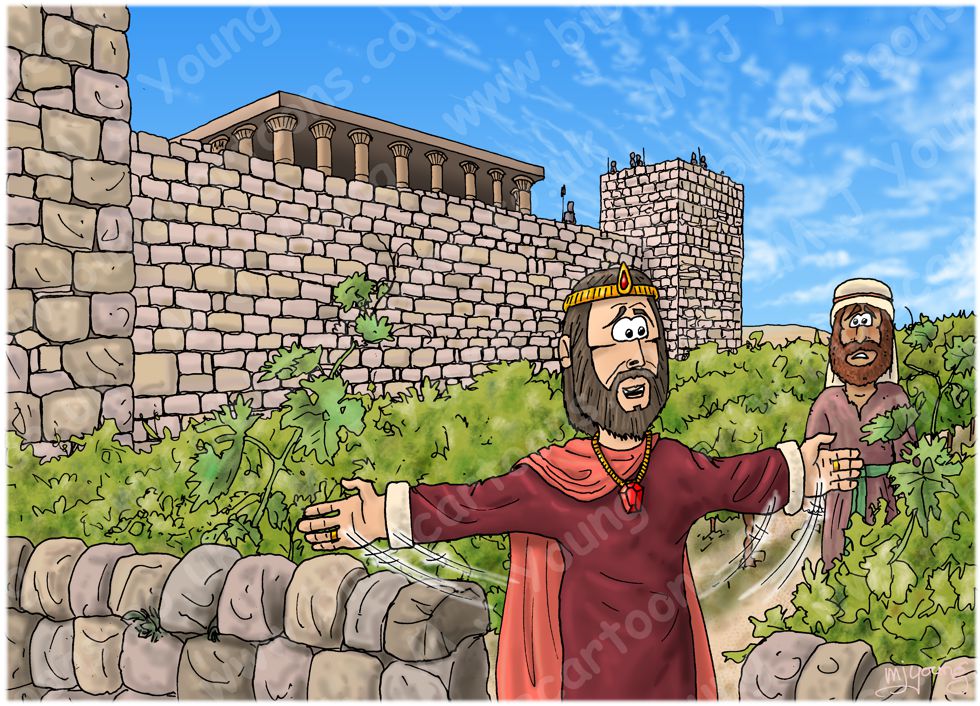 1 Kings 21:1-3 (ANIV)
Naboth’s Vineyard
1 Some time later there was an incident involving a vineyard belonging to Naboth the Jezreelite. The vineyard was in Jezreel, close to the palace of Ahab king of Samaria. 2 Ahab said to Naboth, “Let me have your vineyard to use for a vegetable garden, since it is close to my palace. In exchange I will give you a better vineyard or, if you prefer, I will pay you whatever it is worth.”
3 But Naboth replied, “The Lord forbid that I should give you the inheritance of my fathers.”

TIME OF DAY:
Not specified in the Bible narrative, I have set the scene in the early afternoon.

LIGHTING NOTES:
The sun (over head & to the left) illuminates this scene, casting shadows below & to the right of figures & objects.

CHARACTERS PRESENT:
King Ahab (of Israel) is the figure in red, Naboth is wearing a rough grey-brown outer robe, amongst the grape vines.

RESEARCH/ADDITIONAL NOTES:
The first verse of this story benefits from some explanation. The previous chapter (1 Kings 20:35-43) is about Ben-Hadad’s Aramean army being defeated by king Ahab, but Ahab lets Ben-Hadad live, somethig the Lord had decided against. At the end of the chapter a prophet condemns Ahab, and he goes back to his palace in Samaria sullen & angry!
Then we have the story of Naboth’s vineyard, in which Jezebel (Ahab’s evil wife) arranges the death of the vineyard owner, so that her husband (Ahab) can take possession of it… all very sinister & wicked!

The scene above shows king Ahab of Isarel, walking into Naboth’s vineyard. Naboth is the figure behind Ahab.
The king has flung his arms wide to indicate his desire to buy the entire vineyard. Naboth’s facial expression tells us he isn’t keen on that idea! Indeed, the Lord God had expressly forbidden the Israelites from permanently selling their land (see Leviticus 25:23-28; Numbers 36:7) [1] Based on this legal prohibition of selling land, it was entirely correct for Naboth to refuse Ahab, & it was entirely wrong of Ahab to even ask to buy Naboth’s land… both men would have known the law of Moses in regard to this proposed transaction.

The colour for the stone walls & ground I established in the Bible Cartoon “1 Kings 19 – Elijah flees to Horeb – Scene 01 – Jezebel’s threat”, so I thought I would use the same colours in this scene, to preserve the colour continuity in my pictures of the region of Samaria.

Just visible above the walls of the city of Jezreel, the flat roof of Ahab’s palace can be seen, supported by many stone pillars. There are a few people (guards & watchmen) on top of the walls too!

I first drew King Ahab in Jan 2016 in the picture entitled “1 Kings 17 – Elijah fed by ravens – Scene 01 – No rain”. The colours & clothing design I have used for Ahab, in the scene above, is identical to the “No rain” one. Of course I doubt very much that king Ahab would go & visit Naboth’s vineyard in his finest royal costume, I expect he had “work clothes” suitable for that! However, in order to help viewers readily identify the many, many characters I have drawn, I think it prudent to use the same clothes, even in different settings, to aid their recall & for the sake of continuity between scenes/stories.

Numbers 36:7 (ANIV)
7 No inheritance in Israel is to pass from tribe to tribe, for every Israelite shall keep the tribal land inherited from his forefathers.

Here is the scene without the figures, but with the vineyard in the foreground. 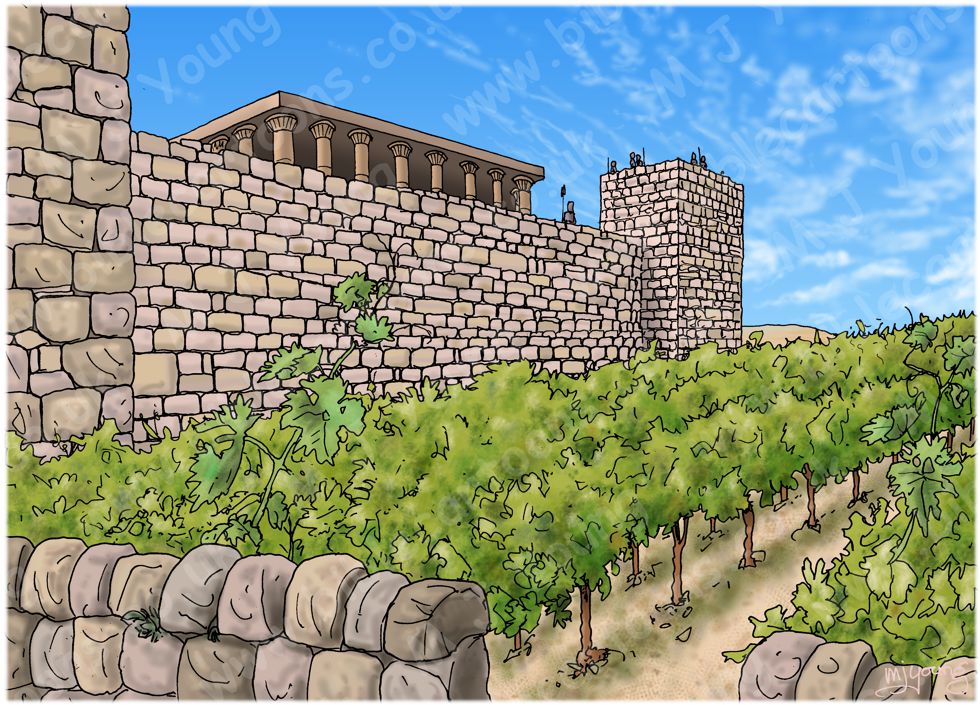 Here is the scene without the figures or the vineyard in the foreground, which shows my interpretation of the city of Samaria. 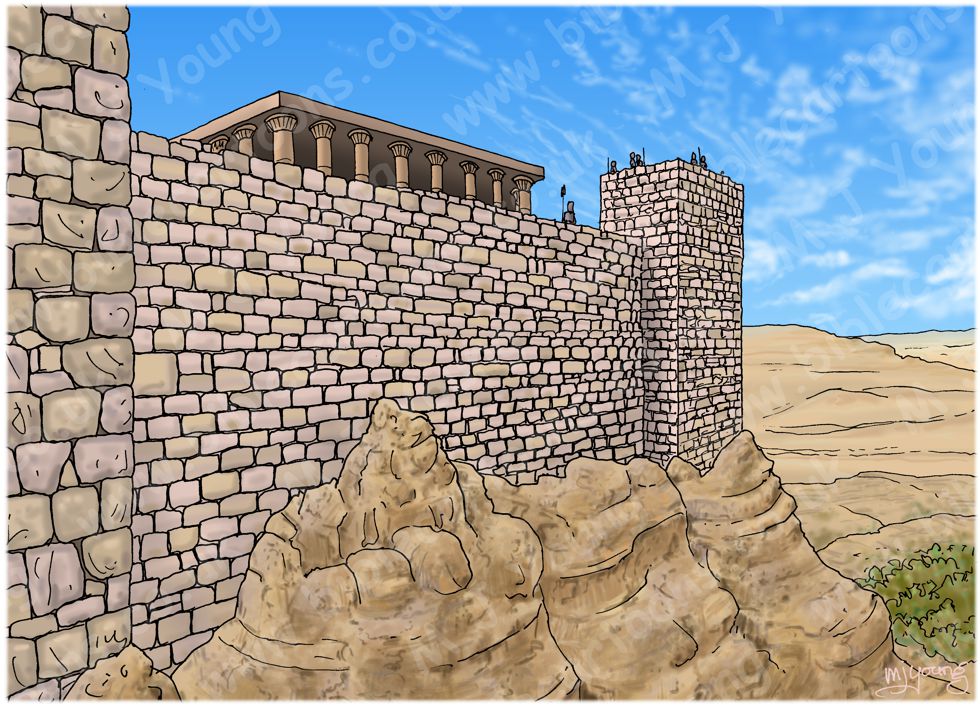