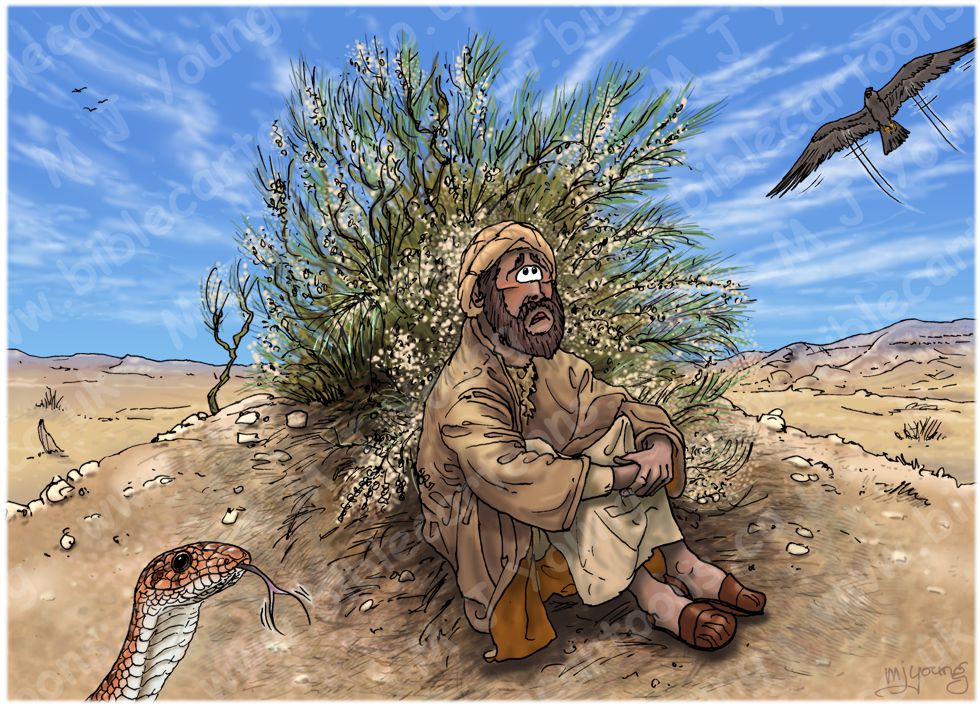 1 Kings 19:3-5a (ANIV)
3 Elijah was afraid [1] and ran for his life. When he came to Beersheba in Judah, he left his servant there, 4 while he himself went a day’s journey into the desert. He came to a broom tree, sat down under it and prayed that he might die. “I have had enough, Lord,” he said. “Take my life; I am no better than my ancestors.” 5a Then he lay down under the tree and fell asleep. [5b All at once an angel touched him and said, “Get up and eat.”]

LIGHTING NOTES:
The sun is behind Elijah.

RESEARCH/ADDITIONAL NOTES:
This scene shows a very depressed looking Elijah, under a broom shrub, in the desert wilderness.

I’ve looked at the topographic and geological maps of the area around Beersheba, and worked out that if Elijah walked a day’s journey (perhaps 10 miles) southward, he would have ended up in sand dunes of the desert wilderness. South of Beer-sheba, rainfall quantities drop sharply, and the landscape becomes increasingly rugged, barren and arid; a region called the Negev/Nebeg. The Wilderness of Zin – see Numbers 34:4 (also called the wilderness of Kadesh – see Psalm 29:8) stretches southeast of Beer-sheba, while portions of the Wilderness of Paran intrude from the Sinai near Kadesh-barnea. The region is a mass of jagged peaks, craterlike depressions (called a makhtesh), sand dunes, and desolate plateaus… a great place for Elijah to “get away from it all!” I have drawn sand dunes and rocky outcrops in my scene to represent this most inhospitable location.

A note about the bird.
The grey bird in the top right is Falco concolor (aka Sooty falcon) is a medium-sized falcon breeding from northeastern Africa to the southern Persian Gulf region. This is an elegant bird of prey, 32–37 cm long with a 78–90 cm wingspan. It is shaped like a large hobby or a small Eleonora’s falcon, with its long pointed wings, long tail and slim body. The adults are blue-grey, and lack the black underwing coverts of the Eleonora’s falcon. The young bird is like a large juvenile hobby, or small juvenile Eleanora’s falcon. Its dark trailing edge to the wings and tail distinguish it from the former species, and it lacks the underwing contrast caused by the dark coverts of the larger falcon.
[Source: https://en.wikipedia.org/wiki/Sooty_falcon]

A note about the snake.
The snake in the bottom left, looking at Elijah is Lytorhynchus diadema (aka Common Leaf-nosed Snake, ascrowned leafnose snake, Awl-headed Snake, Crowned Leafnose Snake, Diademed Sand Snake, Diamond Snake) A little-known, burrow-dwelling reptile, the most distinctive feature of the awl-headed snake (Lytorhynchus diadema) is its shovel-shaped, projecting snout which is used as an adaptation for digging into sand while seeking out prey. With undulations of the elongated, cylindrical body and medium-sized tail, the head, with sunken mouth and enlarged scales, is thrust into the ground and the sand is pushed away. The awl-headed snake varies in colour from pale yellow to yellow-brown or reddish, although a series of dark rectangular blotches on the upperside and smaller spots on the sides of the body are largely retained. There is a chocolate-brown circle or ring on each side of the head behind the eyes, which are usually joined by a brown bar, and a dark stripe runs from each eye to the corner of the mouth. The underside of the body is a uniform white or cream.
{source: https://www.arkive.org/awl-headed-snake/lytorhynchus-diadema/]

A note about the Broom “Tree”.
Most Bible’s translate the plant mentioned in verse 4 as a broom tree. Some (ie KJV, ASV) call it a juniper tree, or Raetam. After a bit or research I can see that what is called Raetam in some translations actually is Broom, specifically Retama raetam (aka White Broom, White Weeping Broom) a shrub native to northern Africa from the Western Sahara to Sudan, Sicily, the Sinai Peninsula and Saudi Arabia, and widely naturalized elsewhere. In fact it is more likely to have been a shrub, rather than a tree, which is what I have drawn in my scene.

I found an interesting article on the internet about this plant…

The Hebrew words translated “juniper” in the Authorized and Douay versions are “rotem” or “rothem” and “r’tamin”, and “ritmah” or “rithmah” (Greek, ?a?µe?); and it has nothing whatever to do with the true junipers, Juniperus. Actually the Scriptural “juniper” was a species of broom known as the white broom, Retama raetam. [2] Its habit of growth is similar to that of the Scotch broom, Cytisus scoparius (L.) Link, but its branches are longer and more flexible, forming an erect dense bush 3 to 12 feet tall. Although its leaves are very small and sparse, simple, and linear, it nevertheless forms a very agreeable shade in desert regions. The white pea-like flowers are sweetly fragrant and are borne in subsessile clusters along the twigs. The white broom is a beautiful shrub and is abundant in the Palestinian desert regions, growing on hills, in rocky places, ravines, and sandy situations. It is common around the Dead Sea, in Gilead, in the Jordan valley, on the Syrian desert, in Lebanon, on Mount Carmel, and on all the deserts southward to Arabia Petræa, Sinai, and Egypt. [3] It is also said to be found on the Philistine and Phoenician coasts. In the “wilderness” (deserts) it is in many places the only bush that affords any shade. Tristram describes this plant very effectively: “This is one of the exquisitely beautiful plants of the country. The gauzy delicate pink-and-white hues of a whole hill-side covered with shrub in blossom, as I have seen it in gilead, is unsurpassed even by the apple blossom of an English orchard.” The “Rithmah” of Numbers 33:18-19 — “Rethma” in the Douay version — is a variant of the same Hebrew word, meaning “place of broom”, and probably refers to the abundance of these plants at that locality. The Goodspeed version of the 1 Kings reference cited above renders the Authorized and Douay versions’ “juniper tree” more correctly as “broom tree”, Jastrow says “broom-tree”, Leesser gives “broom-bush”, while Moffatt says “brook-bush” and “bush”. The Revised Version suggests “broom” in a marginal note. The Arabic name for the tree is “retem” or “rethem”.’

NOTES
[2] Also known as Genista monosperma (L.) Lam., G. raetam Forsk., and Spartium monospermum L. [You may see a picture at “CyberCanaries”, from the Canaries, of course; it’s difficult to sense the scale from this picture, and the plant is far more luxuriant than it would be growing in the desert, or here. See also this page for more on the broom in the Bible, including some discussion of Talmudic commentary.]

[3] Evenari considers the range of this plant more limited, excluding such places as Lebanon and Mount Carmel from which it has been recorded by Post and other workers.
[Source: http://penelope.uchicago.edu/misctracts/juniper.html] 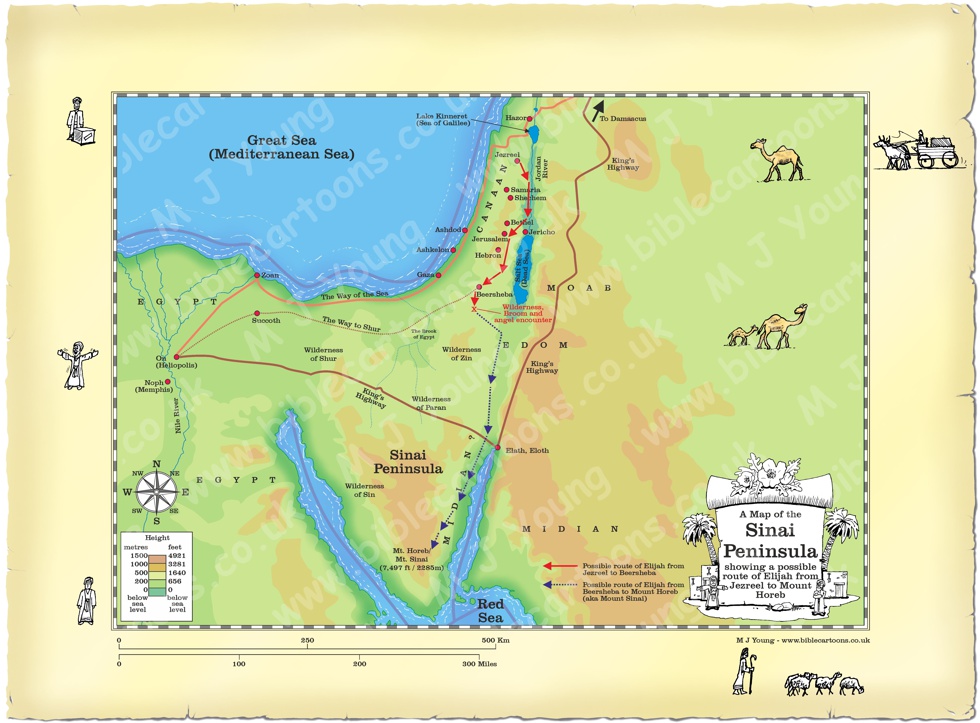 Link to related Map
Click blue bar below to see Map of Sinai showing a possible route of Elijah from Jezreel to Mount Horeb with purchase option:
View/Buy this map 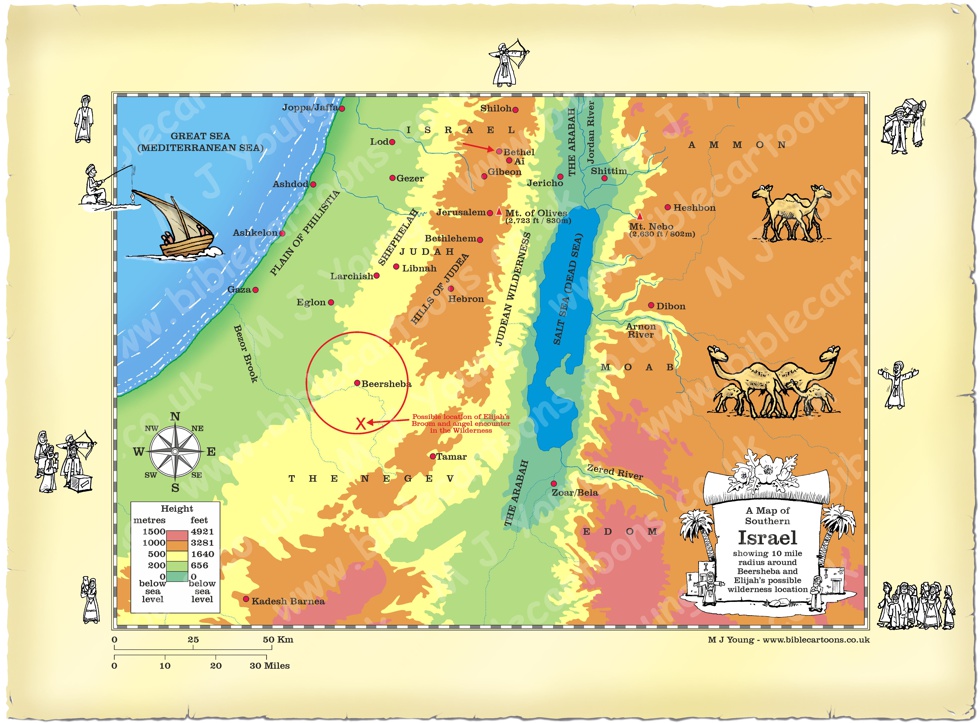