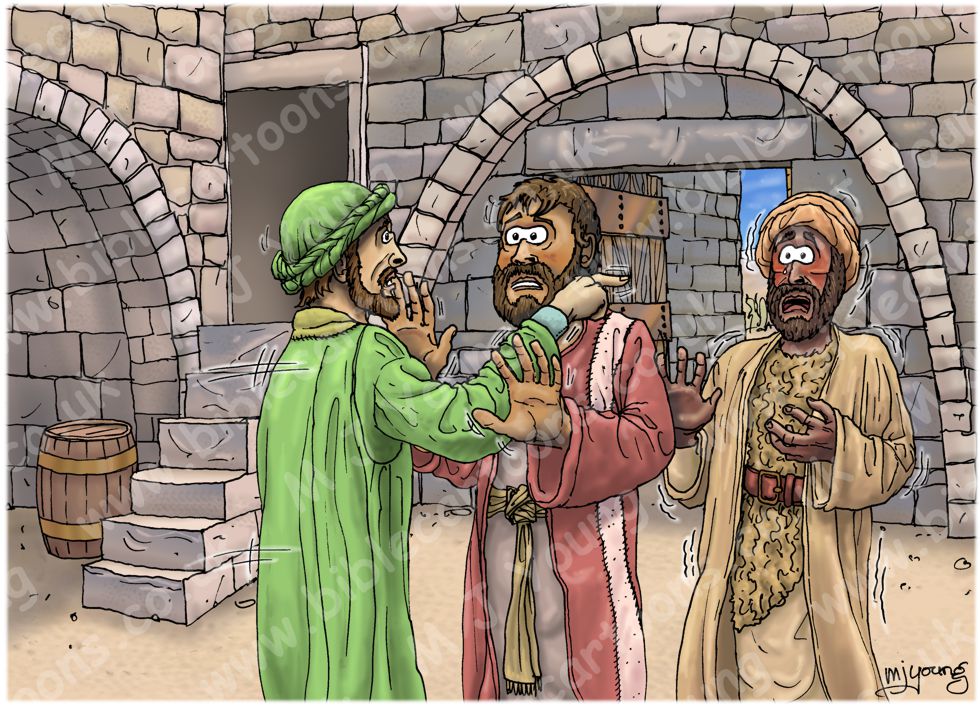 1 Kings 19:1-2 (ANIV)
Elijah flees to Horeb
1 Now Ahab told Jezebel everything Elijah had done and how he had killed all the prophets with the sword. 2 So Jezebel sent a messenger to Elijah to say, “May the gods deal with me, be it ever so severely, if by this time tomorrow I do not make your life like that of one of them.”

TIME OF DAY:
Not specified in the Bible text. I have made it mid morning.

LIGHTING NOTES:
Sunlight from above.

CHARACTERS PRESENT:
From left to right: the messenger of Jezebel, the servant of Elijah, Elijah the prophet.

RESEARCH/ADDITIONAL NOTES:
This scene is set in the city of Jezreel, on the southern end of the Jezreel valley. It shows the messenger sent by Jezebel (the wife of king Ahab) pointing at the prophet Elijah, and delivering his mistresses’ threatening message. The Bible text for this story informs us that Eijah had a servant (see 1 Kings 19:3) and so I have him stopping the messenger from getting to his master.

A description of what Elijah looked like can be found in 2 Kings 1:8, “He was a man with a garment of hair and with a leather belt round his waist.” This brief description has informed all my drawings of Elijah: I have given him a vest or tunic of hairy sheep or goat skin, with a wide leather belt strapped around his waist, beneath a yellow-ochre coloured outer robe. Elijah often wears a pale, yellow-ochre turban as well.

Note that Jezebel had not been present on Mount Carmel when heavenly fire came down and burnt the sacrifice, followed by the execution of her priests of Baal. It must have been her husband king Ahab who reported to her what had taken place. This news must have infuriated Jezebel in the extreme, so she sent her messenger to threaten Elijah’s life. I expect she didn’t send guards and/or soldiers to immediately arrest Elijah because public opinion would have been very much in favour of Elijah at this time.

Elijah was probably still in the city of Jezreel, or very close by, so Jezebel’s messenger wouldn’t have had far to go to deliver her threatening message. We know from 1 Kings 18:46 that Elijah had ran ahead of Ahab all the way from Mount Carmel to the city of Jezreel. Jezebel threatened to take Elijah’s life within 24 hours, in retaliation for his slaughtering the 450 Baal prophets.

I have given the messenger of Jezebel a green robe, which is reminiscent of Jezebel’s own green robe, and so visually connects the two.

Elijah had just experienced the extraordinary power of Almighty God on the mountain of Carmel, with the fire from heaven incident and the rain storm after the drought in the land (see 1 Kings 18). It seems a little strange then, after such impressive supernatural demonstrations, that Elijah would be so frightened by Jezebel’s threat to his life. In fact he was so terrified that he ran from the city of Jezreel and went all the way to the to the southernmost town in the land, Beersheba, and even went out into the wilderness to escape from her (see 1 Kings 19:3-4).

A note about the city of Samaria.
Although the action takes place in the city of Jezreel, it was the city of Samaria (aka Sama’ria, “watch mountain”) in which Ahab had his palace. This city was the capital of the northern kingdom of Israel and gave it’s name both to the city and the region. The city is situated 30 miles north of Jerusalem and about 6 miles to the northwest of Shechem, in a wide basin-shaped valley, 6 miles in diameter. The basin is encircled with high hills, almost on the edge of the great plain which borders the Mediterranean Sea.
In the centre of this basin (which is on a lower elevation than the valley of Shechem) rises a less elevated hill, with steep yet accessible sides and a long flat top. Omri (the king, and Ahab’s father) chose this hill as the site of the capital of the kingdom of Israel.

1 Kings 16:24 (ANIV) records the purchase in 925 BC, by king Omri…
24 He [Omri] bought the hill of Samaria from Shemer for two talents of silver [about 150 pounds (about 70 kilograms)] and built a city on the hill, calling it Samaria, after Shemer, the name of the former owner of the hill.

It was Ahab, no doubt inspired by his Sidonian wife Jezebel, who built a temple to Baal in the city of Samaria and set up an Asherah pole (see 1 Kin 16:32-33) which “did more to provoke the Lord, the God of Israel, to anger than did all the kings of Israel before him.”

This is what the background Jezreel townscape looks like, without the figures… 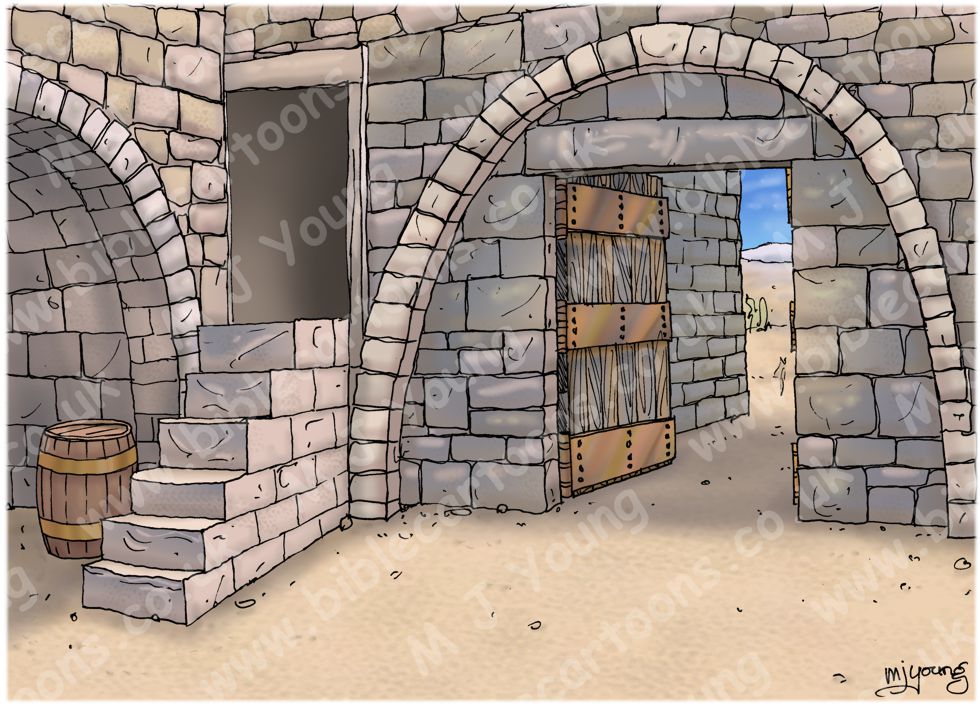