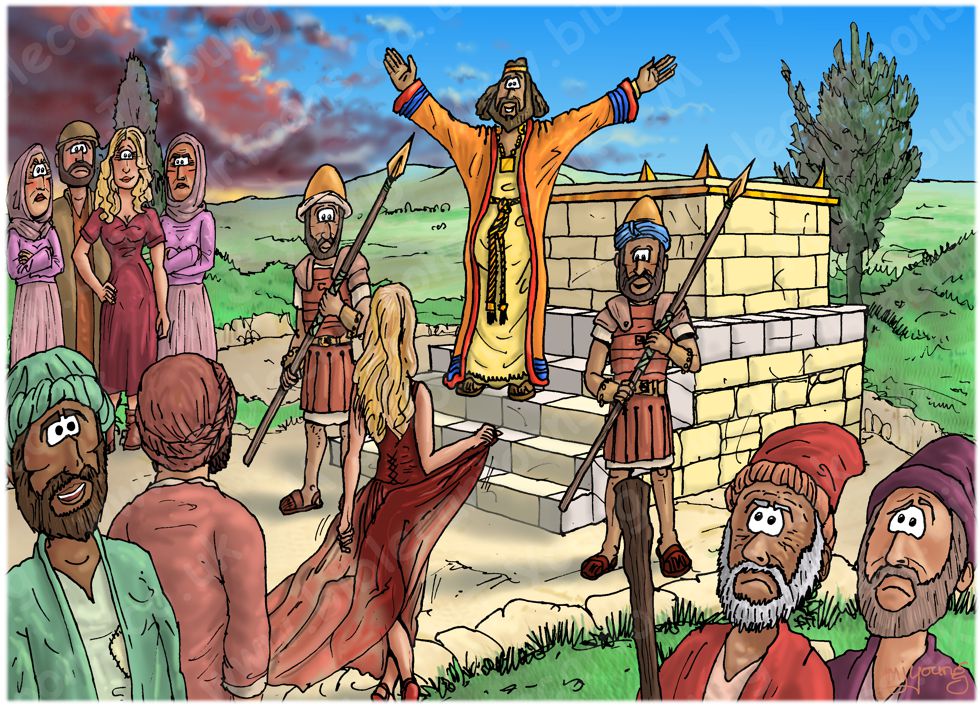 1 Kings 13:33-34 (NLT)
33 But even after this, Jeroboam did not turn from his evil ways. He continued to choose priests from the common people. He appointed anyone who wanted to become a priest for the pagan shrines. 34 This became a great sin and resulted in the utter destruction of Jeroboam’s dynasty from the face of the earth.

TIME OF DAY:
Unspecified in Bible narrative, I have set the scene in the late afternoon.

LIGHTING NOTES:
The sun is low (unseen in the wets, on the right) & casts long shadows to the left of figures & objects.

CHARACTERS PRESENT:
King Jeroboam I is the brightly dressed man on the steps of the altar.
The old prophet from Bethel I the man in red in the right foreground, with his youngest son beside him.
Various soldiers, guards, priests, passers-by, etc are included throughout the scene.

RESEARCH/ADDITIONAL NOTES:
This is the final scene in this series. As the narrative states, even after the events that have been illustrated so far (i.e. the death of the man of God from Judah I such unusual circumstances) king Jeroboam did not turn from his evil ways. It should have been only men from the tribe of Levi that were appointed as priests

The captain of the guard is the man in leather armour, on the right of the altar, with blue on his helmet. Another guard is on the left of the altar. There are 2 women in identical clothing & a man in the background, most of whom appeared in the first few scenes in this series.

I have included 2 new women & 2 new men in this scene, all of whom represent the “common people” referred to in verse 33 above! One woman is in a flowing dark red dress & is walking towards the altar. The other is being looked at angrily by the other women in headscarves, in the background. There is a man in patched green clothing in the left foreground, and a man in brown with his back to the viewer.

Notice that there is still a crack in the altar (see Scene 02 for details), although it has been repaired.

Notice that in the sky there is a storm approaching. This is my way of visually illustrating the downfall of king Jeroboam. Regarding which the Bible Knowledge Commentary has this to say:

Jeroboam’s Persistent Apostasy (13:33-34)
That the preceding incident was intended to teach Jeroboam and the Israelites the danger of disregarding the word of the Lord seems clear from this brief passage. The king’s sins had been recounted (12:25-33), then he was warned (13:1-32), but still Jeroboam did not change his evil ways. Though the appointing of just anyone to the priestly office is singled out (v. 33; cf. 12:31) and was perhaps the most serious aspect of his apostasy, it was his total disregard for the will of God as expressed in the Law of Moses that resulted in Jeroboam’s downfall and destruction. This was the sin (i.e., apostasy) from which many others grew. Though God used political situations and social conditions to bring about His ends, this sin by Jeroboam was the root cause of Israel’s fall.
[Source: Bible Knowledge Commentary] 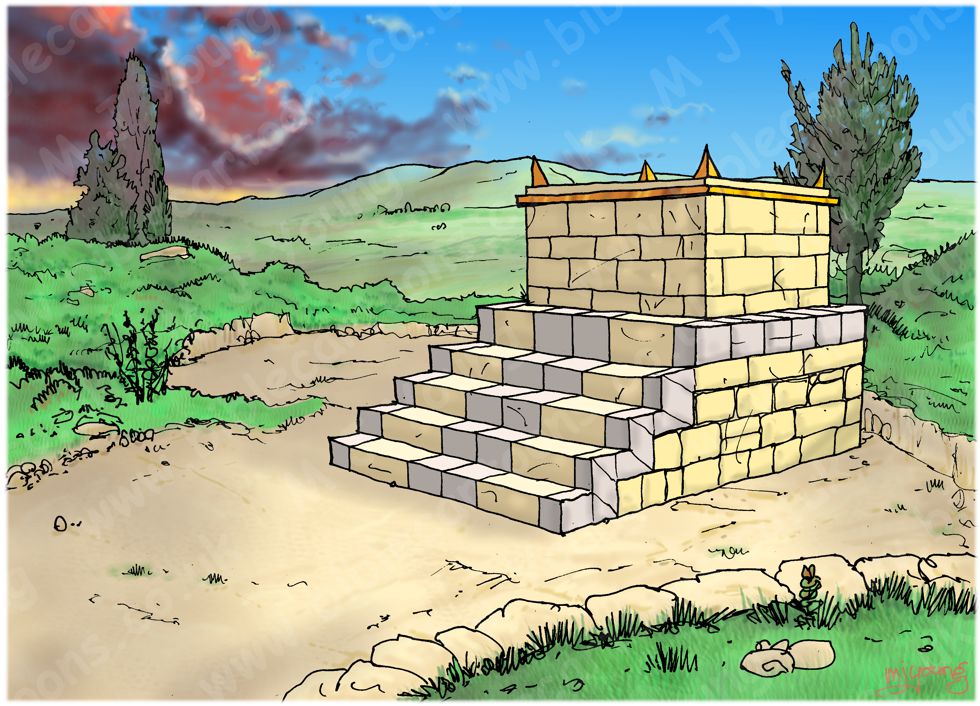