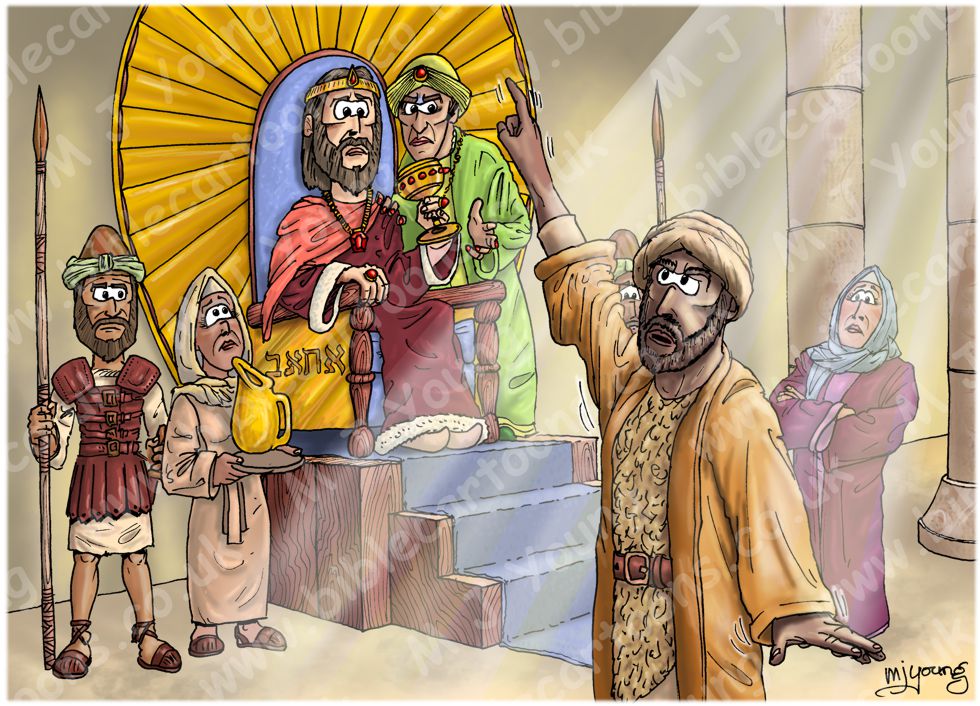 1 Kings 17:1 (ANIV)
[Elijah fed by ravens]
Now Elijah the Tishbite, from Tishbe [1] in Gilead, said to Ahab, “As the Lord, the God of Israel, lives, whom I serve, there will be neither dew nor rain in the next few years except at my word.”

LIGHTING NOTES:
The primary light source is the light from above, casting shadows to the left.

CHARACTERS PRESENT:
From left to right: a guard (holding spear), a servant girl with tray & golden jug, King Ahab (on golden throne), Jezebel (the king’s Sidonian wife, in green), the prophet Elijah, pointing towards the sky, another spear-carrying guard (behind Elijah), a female courtier (in purple robes.)

RESEARCH/ADDITIONAL NOTES:
This picture shows the prophet Elijah in king Ahab’s court, telling him that there will be no rain. I enjoyed drawing Elijah’s stern facial expression, his upraised right hand, pointing towards the sky, & his left hand slashing downwards, indicating emphatically that there will be “No rain!”

Having drawn Elijah before (first time was January 2012) I have already established his appearance & costume. We know from 2 Kings 1:8 that Elijah could be recognised by his “garment of hair [Or He was a hairy man] and leather belt around his waist.” Ever since I read that description I have depicted Elijah wearing a sheepskin under-robe, with a large leather belt buckled over it.

I decided to draw Ahab’s throne looking very opulent & splendid. Notice the gold overlayed wooden background behind Ahab, which is designed to look like suns rays, all centred on the king, sitting on his throne. The inscription on the side of the throne is written in Hebrew & says “Ahab”.

1 Kings 16:30-32 (ANIV) tells us what sort of king Ahab was:
“30 Ahab son of Omri did more evil in the eyes of the Lord than any of those before him. 31 He not only considered it trivial to commit the sins of Jeroboam son of Nebat, but he also married Jezebel daughter of Ethbaal king of the Sidonians, and began to serve Baal and worship him. 32 He set up an altar for Baal in the temple of Baal that he built in Samaria.”

Clearly the bible tells us Ahab did evil in the Lord’s eyes. I have chosen to illustrate this evil, self-centred king by showing lots of gold in the scene. Not that gold is evil of itself, simply the lust for it can indicate an evil, self-centred, covetous nature! Apart from the golden disc behind him, Ahab has a gold crown, gold rings, a gold necklace, a gold cup & even a gold pitcher or jug. He has large rubies (red gem stones) in much of these golden items. The idea is to show that Ahab wants everyone’s attention & is happy to focus on his own wants & desires, rather than humbly following the Lord.

The woman in green talking to king Ahab is Jezebel, daughter of Ethbaal king of the Sidonians (Sidon was an important sea port city of the Phoenician people.) Ahab was led astray by Jezebel to worship Baal, rather than the Lord God. I thought I’d colour her robes a sickly, unhealthy green shade, to illustrate the poisonous nature of her deceitful advice to Ahab.

The guards’ clothing is similar to that designed for some of the earliest of my Bible Cartoons, found in John’s Gospel, e.g. John 11 – The plot to kill Jesus. 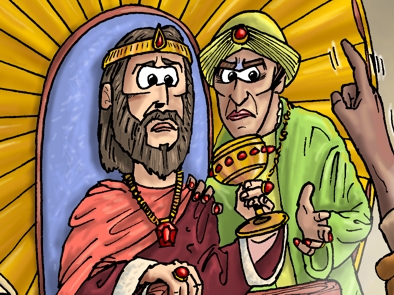 
Bible Doctrine Notes
17:1,12 GOD, Living (1.12A)
God is a living, divine person, with personal characteristics, creative ideas, plans, etc. He is not an impersonal, inanimate object, or fixed principle, such as all other “gods”.

17:1 EVIL AND SUFFERING, Divine Origin (2.31A)
The Creator of the cosmos remains in charge of His creation; He can use or change nature’s cycles for His purposes, but that means when He chooses to do so, suffering may result.
God does not cause evil, but allows evil as a choice for us. Evil doesn’t cause temporary pain, it is that which seeks to thwart God’s purposes. God used Elijah and nature to show that He, not the “god” Baal (mentioned in chp 16), controls nature and history.

17:1-7 REVELATION, In Nature (3.21P)
God has created a world and cosmos governed by natural laws and principles, some of them govern the weather. Natural law does not mean God has given up controlling His cosmos, our world, or its weather. He can reveal coming weather patterns and phenomena (drought, in this case) to His spokesperson and use it to reveal His power over the earth’s fertility.

17:1 PRAYER, Sovereignty of God (5.51B4)
Jezebel, the Sidonian wife of Ahab (the king of Israel) had influenced him to actively promote the worship of Baal in his kingdom (see 1 Kings 16:31). “Baal” means possessor, amongst other things. Elijah began a long campaign to demonstrate the sovereignty of the God of Israel, who possess heaven and earth. Part of that campaign involved Elijah swearing an oath, promising that God would withhold rain (as a source of fertility for the crops) which demonstrated that God, not Baal, controls the weather and thereby the land’s productivity.