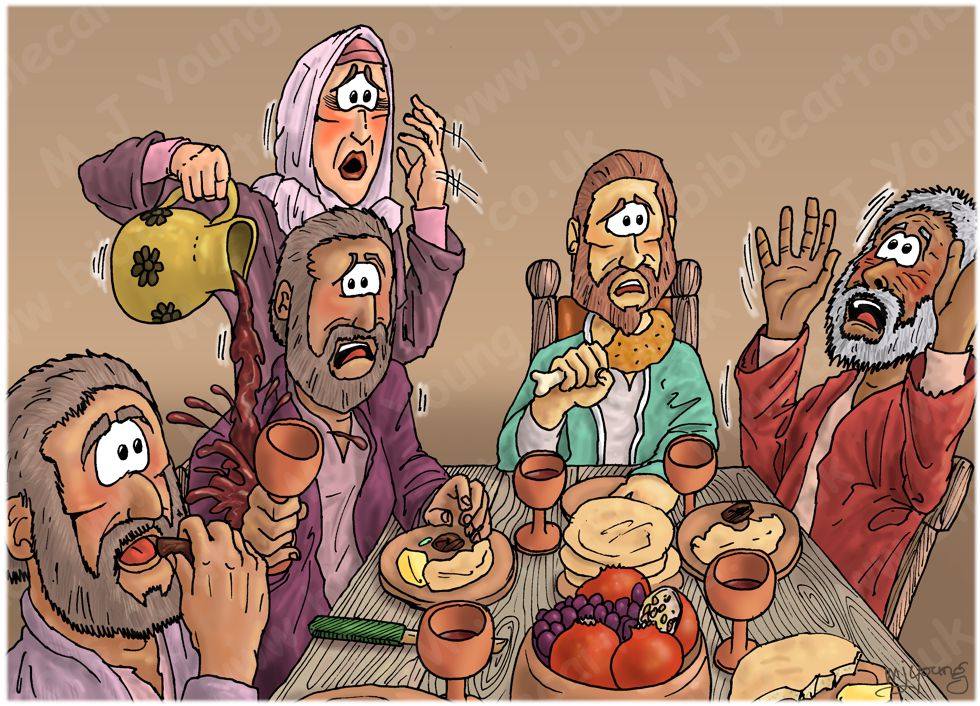 1 Kings 13:19-22 (NLT)
19 So they went back together, and the man of God ate and drank at the prophet’s home. 20 Then while they were sitting at the table, a command from the Lord came to the old prophet. 21 He cried out to the man of God from Judah, “This is what the Lord says: You have defied the word of the Lord and have disobeyed the command the Lord your God gave you. 22 You came back to this place and ate and drank where he told you not to eat or drink. Because of this, your body will not be buried in the grave of your ancestors.”

TIME OF DAY:
Some time after the previous scene, perhaps mid afternoon.

LIGHTING NOTES:
This scene is set inside the old prophet from Bethel’s home, so there is no direct sunlight. Some defused sunlight illuminates the scene from the right, casting slight shadows to the left of figures and objects.

“This somewhat confusing story may appear at first to contribute nothing to the advancement of the narrative or the writer’s purpose. But careful study clarifies its value.

13:11-14. A second prophet was living in Bethel and was old. These are important clues. Old age sometimes tends to make one lazy and complacent. This man’s complacency is further suggested by his willingness not only to live in the territory of the apostate king but at the very center of the king’s false system of worship.
Why the old prophet rode after the prophet from Judah is not stated. Perhaps he simply wanted to visit with a younger, more faithful servant of the Lord. Or his motive from the beginning could have been jealousy and his intent could have been to destroy the younger prophet’s ministry.

13:15-19. In response to the faithful prophet’s refusal, the old man claimed direct revelation from God through an angel who had told him, he said, that the young man should forget his former instructions from the Lord. So the prophet of Judah, not suspecting that the old prophet was lying to him… returned to Bethel and ate with him. The apostasy of Jeroboam had infected even a prophet who seems to have had the same selfish motives and practiced the same brazen disobedience as the king. The spirit of apostasy was spreading quickly and was already reaping a grim harvest in Israel.

Even though the old prophet had sinned, the word of the Lord came to him again, as it did to many other prophets of the Lord who sinned (e.g., Jonah, Elijah). The old man announced the fate of his brother prophet then and there. The younger prophet, because he had disobeyed the Lord’s command, would not be given an honorable burial. The severity of God’s judgment on this man, compared with His dealings with the older prophet who was also disobedient, seems unfair. But the severity of God’s judgment was proportionate to the importance of the younger man’s mission. All Israel would have heard about his prophecy of God’s judgment on Jeroboam for his disobedience to the word of the Lord through Moses. If God had not judged His own prophet for his disobedience to the word given him by God and which he had announced publicly, doubt would have been cast on his prophecy and on God’s credibility. By comparison the older prophet’s sins were private and were judged privately by God.”
[Source: Bible Knowledge Commentary]