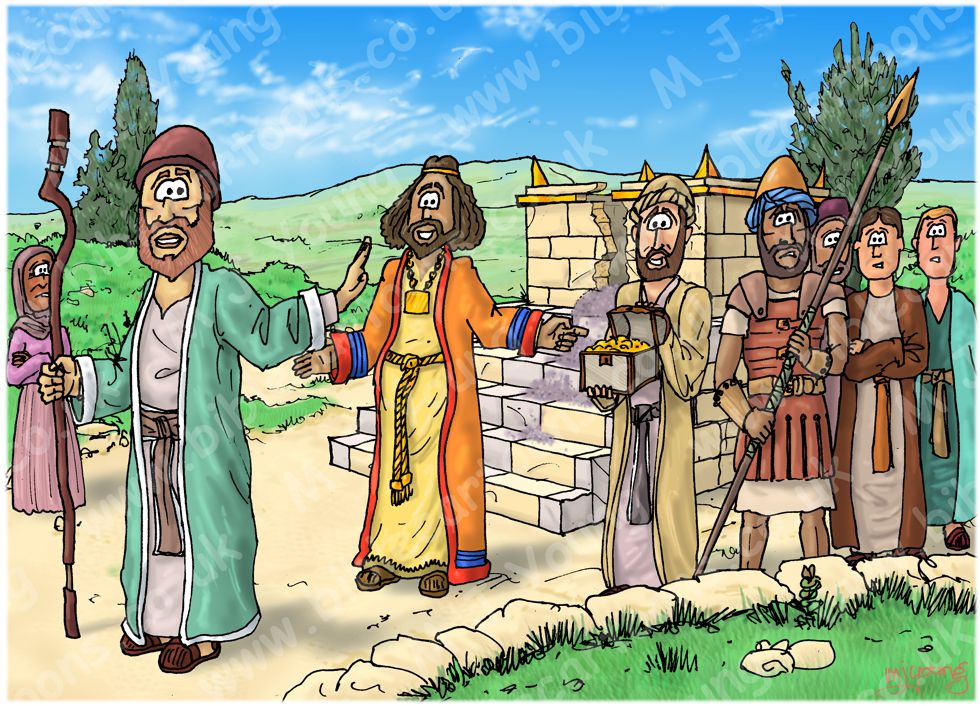 1 Kings 13:6-10 (NLT)
6 The king cried out to the man of God, “Please ask the Lord your God to restore my hand again!” So the man of God prayed to the Lord, and the king’s hand was restored and he could move it again.
7 Then the king said to the man of God, “Come to the palace with me and have something to eat, and I will give you a gift.”
8 But the man of God said to the king, “Even if you gave me half of everything you own, I would not go with you. I would not eat or drink anything in this place. 9 For the Lord gave me this command: ‘You must not eat or drink anything while you are there, and do not return to Judah by the same way you came.’” 10 So he left Bethel and went home another way.

TIME OF DAY:
Unspecified in the Bible, I have set the scene in the middle of the morning. This scene is just a moment after the previous scene.

CHARACTERS PRESENT:
The un-named man of God is the figure on the left in green outer garment.
King Jeroboam I is the brightly dressed man at the base of the steps of the altar.
The man in mustard-yellow outer robe & holding a chest containing gold is the king’s assistant, possibly a treasurer?
Various Hebrew supporters of the king are present, as seen in previous scenes.

RESEARCH/ADDITIONAL NOTES:
This scene follows on immediately after the previous ones (Scene 01& 02). I have used the same clouds in the sky, which adds to the sense of it being the same time.

King Jeroboam has come down off the alter & is offering the man of God “a gift” (see verse 7), which the man of God is clearly refusing, which his body turned away & upraised hand indicate. The man in a mustard-yellow outer robe is holding a chest containing gold. This is my way of visually illustrating the king’s phrase “Come to the palace with me and have something to eat, and I will give you a gift” from verse 7. I imaging the man in the mustard-yellow outer robe is an assistant to the king, or else his treasurer.

All the figures in this scene are identical to the ones in scene 01, and some are visually present in scene 02 as well.

Notice the wide crack in the altar, behind the king, and the ashes pouring out, as stated in verse 5.