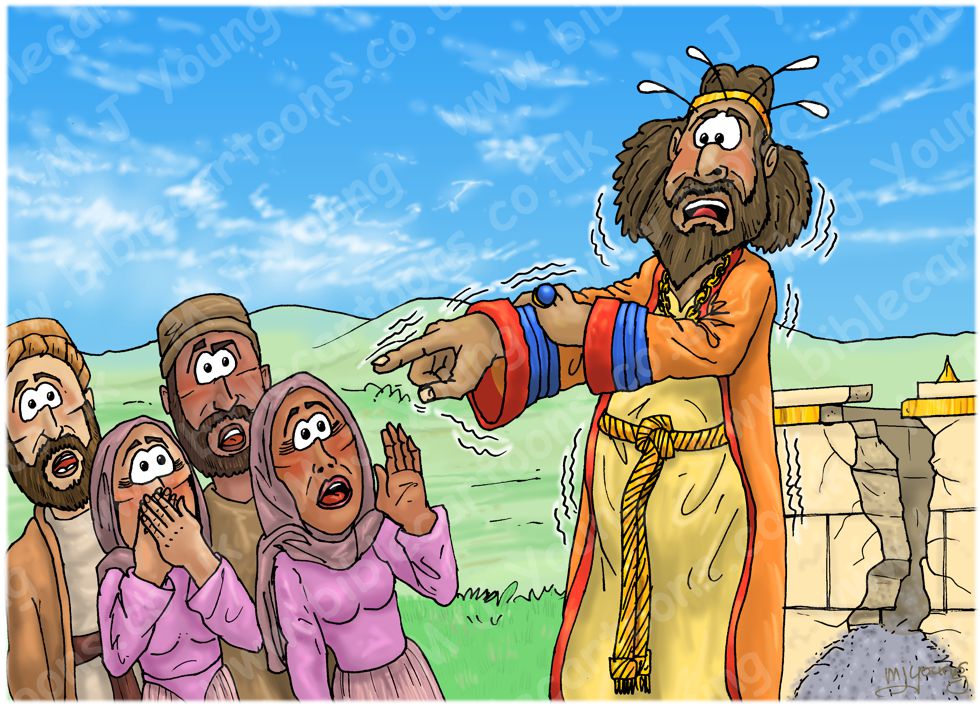 1 Kings 13:4-5 (NLT)
4 When King Jeroboam heard the man of God speaking against the altar at Bethel, he pointed at him and shouted, “Seize that man!” But instantly the king’s hand became paralyzed in that position, and he couldn’t pull it back.
5 At the same time a wide crack appeared in the altar, and the ashes poured out, just as the man of God had predicted in his message from the Lord.

TIME OF DAY:
Unspecified in the Bible, I have set the scene in the middle of the morning. This scene is just a moment after the previous scene.

CHARACTERS PRESENT:
King Jeroboam I is the brightly dressed man on the steps of the altar.
Various Hebrew supporters of the king are present.

RESEARCH/ADDITIONAL NOTES:
This scene follows on immediately after the previous one (Scene 01 – Prophecy against the altar). I have used the same clouds in the sky, which adds to the sense of it being the same time, but added a few clouds since there is more sky to see in this scene.

King Jeroboam I is grasping his right arm with his left hand, as his right hand has suddenly been paralyzed. He has a look of fear on his face, which is quite understandable in the circumstances. Various background Hebrew people are looking on in shock and alarm at this mysterious, divinely-appointed incident.

Notice the wide crack in the altar, behind the king, and the ashes pouring out, as stated in verse 5.