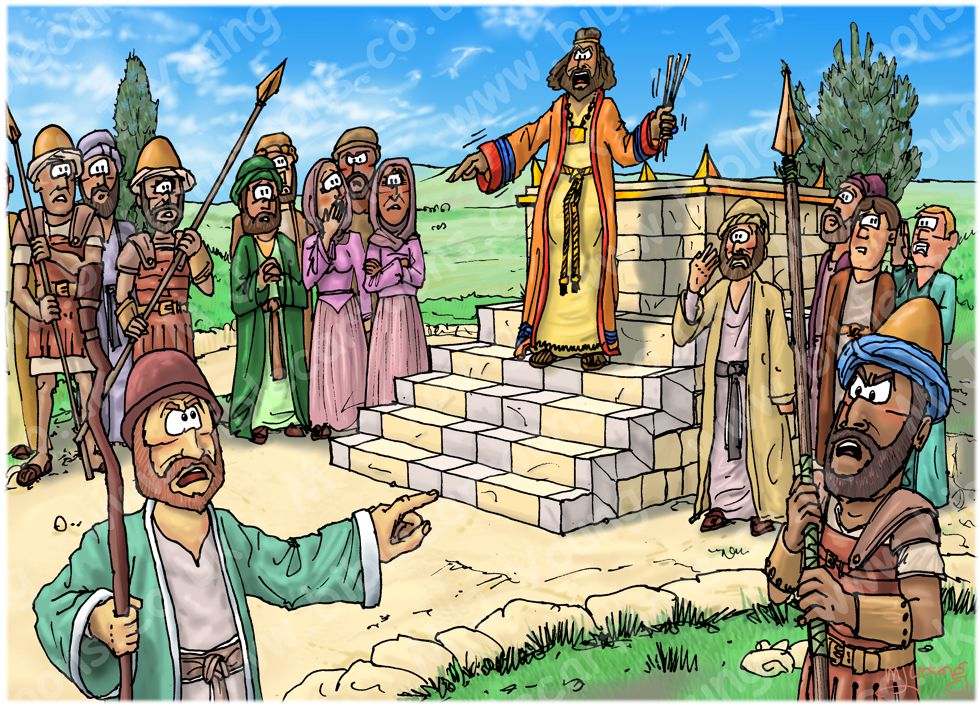 1 Kings 13:1-3 (NLT)
A prophet denounces Jeroboam
1 At the Lord’s command, a man of God from Judah went to Bethel, arriving there just as Jeroboam was approaching the altar to burn incense. 2 Then at the Lord’s command, he shouted, “O altar, altar! This is what the Lord says: A child named Josiah will be born into the dynasty of David. On you he will sacrifice the priests from the pagan shrines who come here to burn incense, and human bones will be burned on you.” 3 That same day the man of God gave a sign to prove his message. He said, “The Lord has promised to give this sign: This altar will split apart, and its ashes will be poured out on the ground.”

TIME OF DAY:
Unspecified in the Bible, I have set the scene in the middle of the morning.

CHARACTERS PRESENT:
In the left foreground is the un-named man of God from Judah, wearing a green outer robe and carrying a staff.
King Jeroboam I is the brightly dressed man on the steps of the altar.
Various soldiers, guards, priests, passers-by, etc are included throughout the scene.
The captain of the guard is the angry looking man in leather armour, in the right foreground, with blue on his helmet.

RESEARCH/ADDITIONAL NOTES:
This scene show the arrival of the un-named man of God from Judah, who has come to confront King Jeroboam I about his idolatrous ways.

Although Jeroboam is described as a capable young man in 1 Kings chp 11, I have imagined him a little older in this scene, and showing signs of self-indulgence and excess, which is indicated by his rather large belly and somewhat garish, flamboyant robes! Verse 1 tells us that Jeroboam was approaching the altar to burn incense, which is why he has some incense sticks in his left hand.

The Hebrew which is translated ish elohim means “a Divine person, one wholly devoted to God’s service”. This un-named prophet from Judah was referring in his prophecy to king Josiah who would destroy many pagan altars in the future (see 2 Kings 23). This prophecy is one of the most remarkable in the Old Testament because it predicted the name and actions of a king who would not be on the earth for another 290 years. Surely this is evidence of the all-knowing nature of God the Father!

The area of Bethel is one of limestone, hence the yellow coloured rocks underfoot.

Who was Jeroboam?
Jeroboam (the first, since there were two kings of Israel by that name), was the son of Nebat, and was one of Solomon’s officials, an Ephraimite from Zeredah, who’s mother was a widow named Zeruah (see 1 Kings 11:26). Verse 28 of 1 Kings 11 informs us that Jeroboam was a young man of standing, who did his work well. Clearly his reputation was well deserved, since King Solomon put him in charge of the whole labour force of the house of Joseph.

The story of Jeroboam’s rebellion against Solomon, after meeting the prophet Ahijah in the countryside near Jerusalem, can be read in 1 Kings 11:26-40. In verse 40 the Bible tells us that king Solomon tried to kill Jeroboam, but he escaped to Egypt, only returning to Israel once Solomon had died, and became the first king of the ten tribes that formed Israel when it was a divided kingdom. 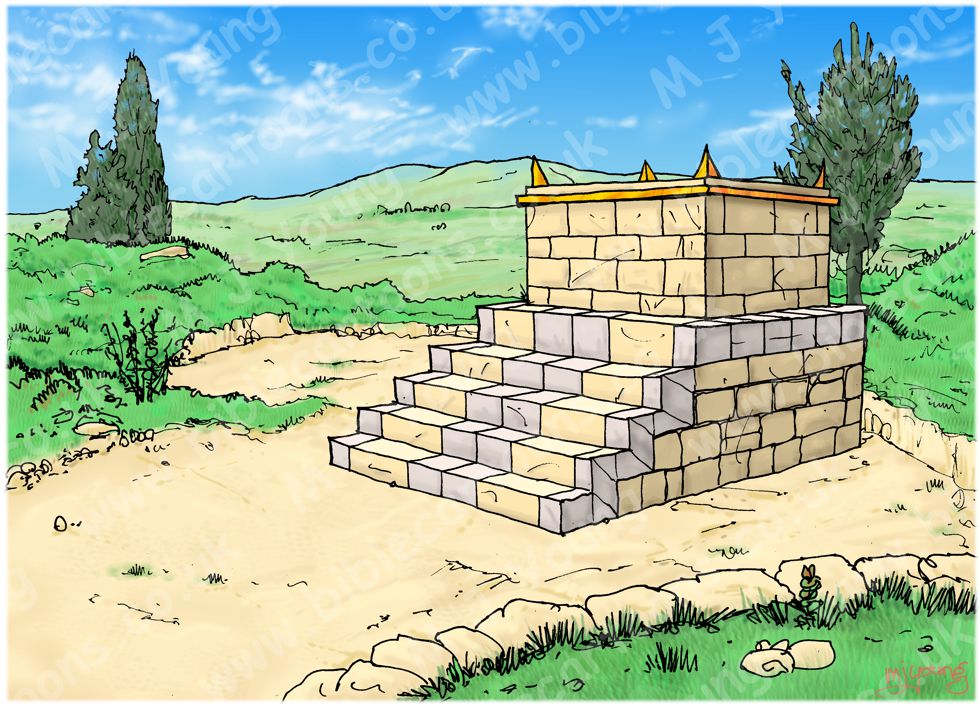