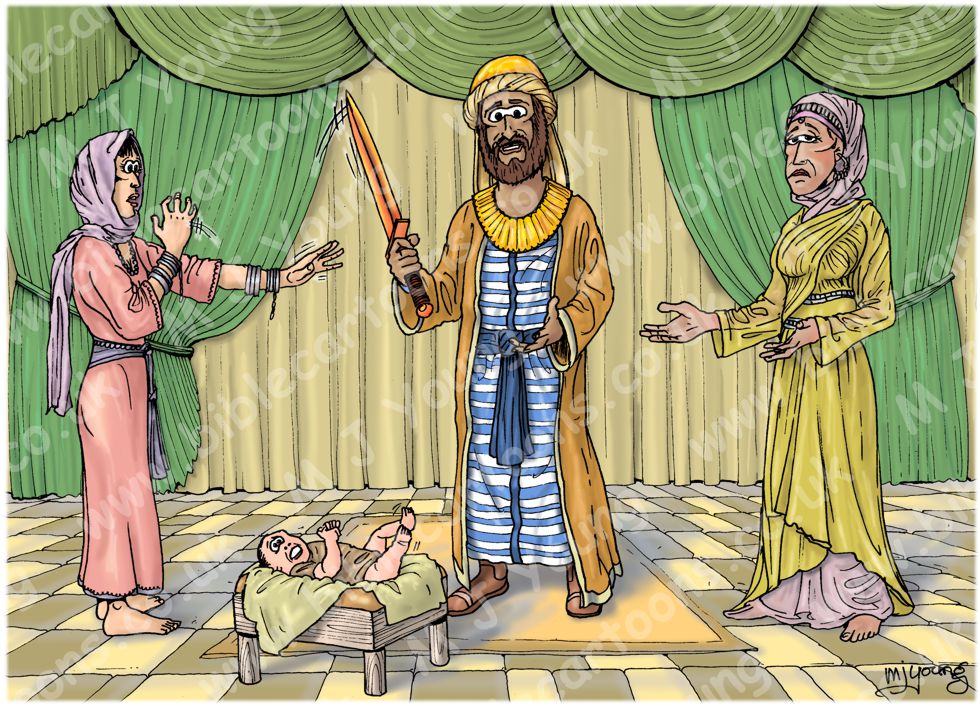 1 Kings 3:23-28 (ANIV)
23 The king said, “This one says, ‘My son is alive and your son is dead,’ while that one says, ‘No! Your son is dead and mine is alive.’ “ 24 Then the king said, “Bring me a sword.” So they brought a sword for the king.
25 He then gave an order: “Cut the living child in two and give half to one and half to the other.”
26 The woman whose son was alive was filled with compassion for her son and said to the king, “Please, my lord, give her the living baby! Don’t kill him!” But the other said, “Neither I nor you shall have him. Cut him in two!”
27 Then the king gave his ruling: “Give the living baby to the first woman. Do not kill him; she is his mother.”
28 When all Israel heard the verdict the king had given, they held the king in awe, because they saw that he had wisdom from God to administer justice.

TIME OF DAY:
The Bible doesn’t specify the time of day, I imagine king Solomon solved disputes and gave judgements in the day time, possibly in the cool of the morning or evening.

LIGHTING NOTES:
This is an interior scene, with unspecified light coming from the left & casting feint shadows to the right of figures and objects..

CHARACTERS PRESENT:
King Solomon stands in his royal finery, with the two prostitutes on either side of him. The baby is in a wooden crib before them all.

The mother of the baby is on the left, with a pleading gesture, whilst the other woman looks on rather dispassionately.

RESEARCH/ADDITIONAL NOTES:
This is the first time I have illustrated king Solomon. This is a fairly simple scene, in which I wanted to show some of the opulence of king Solomon. The drapes behind him are also meant to convey some of his legendary wealth.


Bible Doctrine Notes
3:7-9,16-28 CHRISTIAN ETHICS, Justice (4.42B)
This account serves to illustrate the fact that justice is best bound with compassion and wisdom. No human being can rule wisely and justly without God’s wisdom and a humble dependence on Him.