I’ve just uploaded my latest cartoon, from the Old Testament book 2 Kings, chapter 02, where Elijah is carried into heaven. I really enjoyed creating & colouring the horses of fire; I’m very pleased with the way this scene came out! I was also very pleased with the whirlwind or column of fire that is carrying Elijah into heaven as well. It reminds me of the Space Shuttle or Apollo rockets taking off! The base of the column is intensely white hot & that really draws the viewers eye to that lower left portion of the scene. But then the attention darts back to those fiery horses & the chariot. I hope no-one thinks the sword-weilding charioteer is about to chop of poor Elisha’s head… definitely not my intention to show that!

The chariot & 2 figures inside are really only representations & shouldn’t hold the viewer’s attention for long. I was also pleased with the chariot’s trail of flames, curving around the column of fire. When I thought about it, I think I have been positively influenced by the artist Josh Kirby’s illustrations of various scenes from Terry Pratchett’s Discworld novels! He often drew long ribbons of movement lines (whoosh lines!) flowing through his scenes to show the movement of key elements in his designs. I greatly admire Josh Kirkby’s work, so it is inevitable that he would influence me.

Notice Elisha huddled beneath his own cloak & looking amazed, awed or even a little frightened… who wouldn’t be?! He is recorded in the Bible as saying, “My father! My father! I see the chariots and charioteers of Israel!” After that exclamation, it says that “Elisha tore his clothes in distress”, so I think my version of his face is quite apt really. His facial expression gives us a human standpoint to relate to, amidst all that fire!

The little horned Dorcas gazelle (Gazella dorcas) in the bottom right of the scene is yet another of my current fun-loving additions to my cartoons. I like to put an animal, lizard, insect, etc into the scene, to add interest & to engage younger viewers as well.

I found it amazing to note how many other artists have drawn Elijah being taken up into heaven INSIDE the chariot of fire. But when I read many different versions of the Bible, they all say the same thing, that he was taken up in a whirlwind. That’s why I have him standing atop a huge column of fire, inspired by fire tornado photographs I have seen on the internet.

Here is the finished scene below, with 3 close-up’s of various details within the scene: 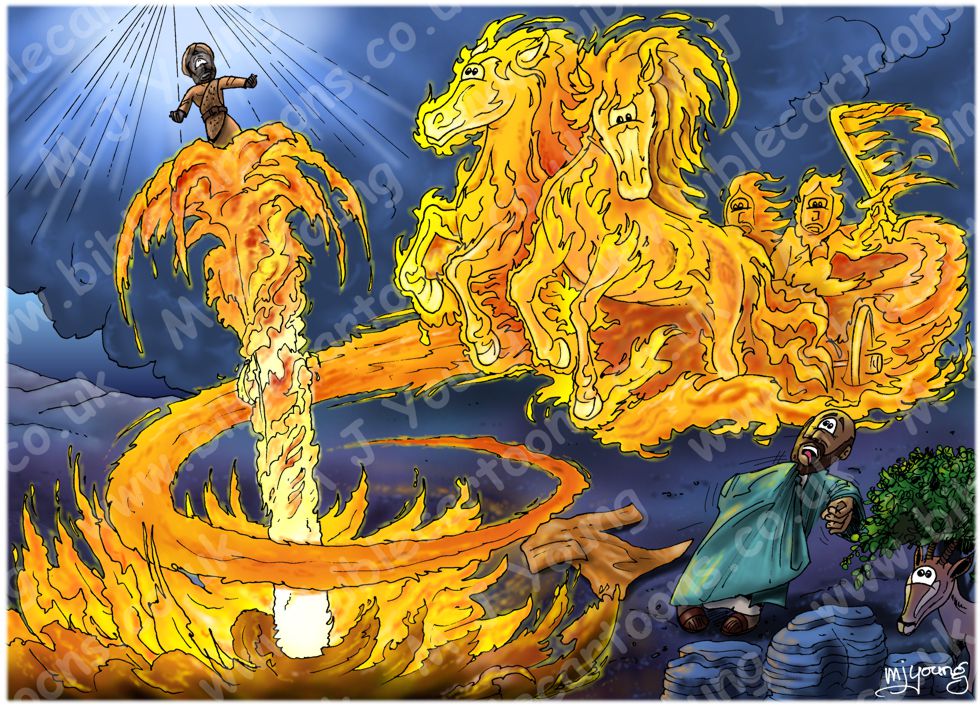 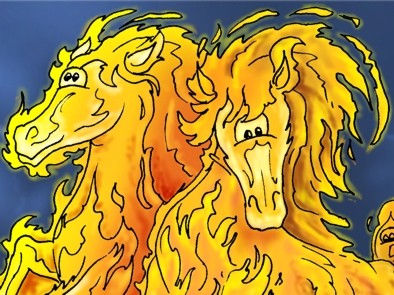 Close-up of the 2 fiery horses 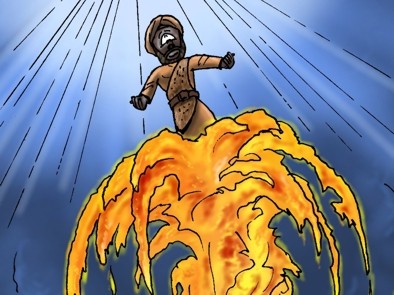 Close-up of Elijah, standing on the whirlwind of fire, ascending into heaven 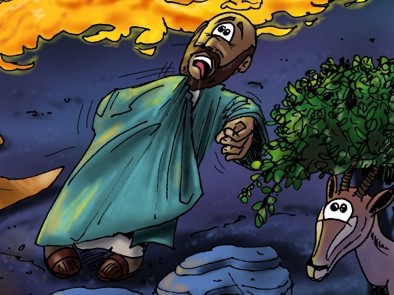 Follow this link to see this Bible Cartoon on the BC Gallery page, with download & purchase options:
Bible Cartoon: 2 Kings 02 – Elijah taken into heaven – Scene 06 – Chariot of fire