This is a continuation of the last blog – see:
Blog: Richard Reed: The entrepreneurs’ job

In that post I said I didn’t have a vision for Bible Cartoons, but then I remembered a sort of vision picture I had several years ago now, which seems quite apt. It involves a rocket sled, which is a machine that travels very fast, along a set of rails, powered by a rocket engine. See my first pencil drawing below.
(see end of this blog entry for more details about rocket sleds) 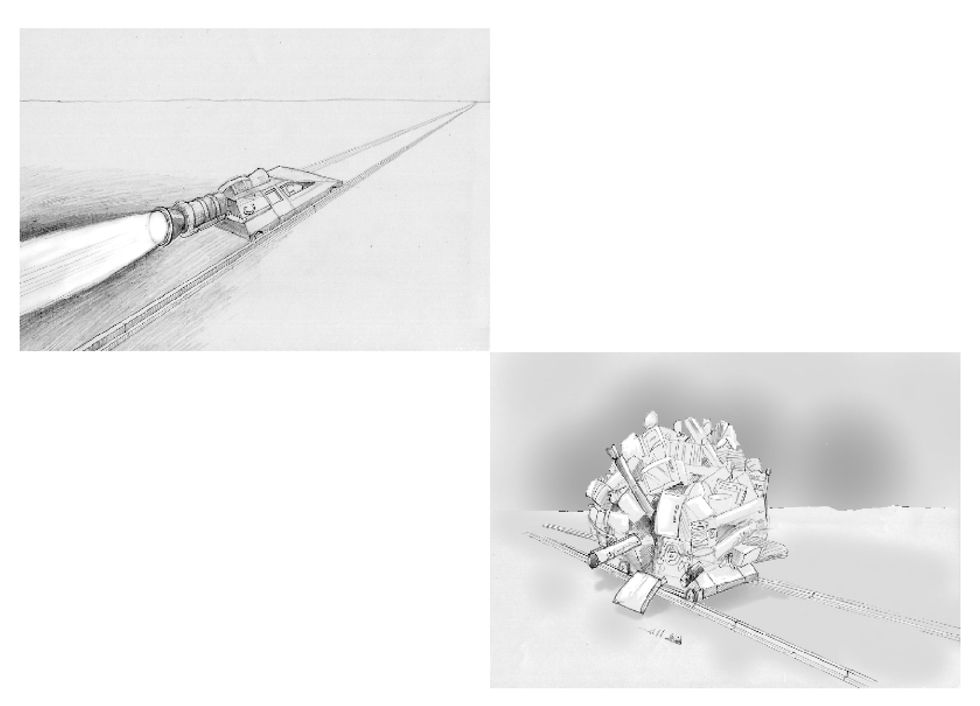 I’m NOT advocating that we all race selfishly, headlong towards our goals, running people over as we go! Nor am I saying that speed is king! The analogy or metaphor is really more about dedication to achieving our goals, rather than the headlong rush in pursuit of them.

Notice the second picture though, below the first scene. This sleek, dedicated rocket sled has collecting things as it hurtles down the rails. What effect does all that “stuff” have on it? Well, imagine the rocket still firing at full power, but the sled is slowing down, moving slower & slower, due to the accumulation of all that “stuff”, weighing it down. If you look hard you will see a snail overtaking the rocket sled in my second picture! The “stuff” is all the things that we allow into our lives that may very well be OK in their on right, but their combined effect is to slow us down in pursuit of our goal(s).

In many ways, I think we can be trying our hardest to run towards our goals (whatever they are) but if we have accumulated lots of “baggage” on our journey, then I guess even though our engines may be going flat out, we will still not get as far (or be going as fast) as we would like too.

We sometimes allow ourselves to be distracted by all sorts of things, some good, some bad, but the cumulative effect can be that these things detract us (slow us down & waylay us) from racing towards our goal(s) at our best speed.

I think we encounter certain distractions which are deliberately put in our path as well (on the “rails” as it were.) Satan, who deliberately wants to load us down in our Christian walk (run!) by all manner of distracting & beguiling things is a master at distracting us with seemingly good things. His aim, of course, is to slow us down (no matter how much our rockets are firing!) in our progress towards our goal(s), especially if our goals are to honour Jesus & move towards the Lord. There’s nothing more Satan would like to do than to load us up with apparently useful luggage (actually useless baggage!) which brings our rocket sled to a standstill, despite our rocket motors being on full power!

So, what’s the answer if we find that we are crawling along the faith-rails or the rails of our vision, instead of zooming along them?…

…dump the baggage, of course! Throw all the rubbish off your rocket sled.

The result?…
…Your rocket sled moves faster, as it was designed to. Rushing you towards your faith-goal(s), vision-goal(s), business goal(s) or whatever. A lean rocket sled, without all the baggage is equal to a deliberately lean life. What does that get you? You travel much faster towards your goal(s). Faster movement = greater distance covered. You move over the rails quicker = more learnt; more discovered; greater exposure to the lessons of life. It also equals a MUCH more exciting journey of discovery.

That’s what I want… it’s time to jettison the baggage!

Rocket Sled Notes
Rocket sleds are used by the United States military to test things like rockets (obviously!), missiles, supersonic ejection seats, how different aeroplane shapes behave at high speed, prior to use in manned aeroplanes & the effects of acceleration/ deceleration on the human body, etc. Rocket sleds travel very, VERY fast, in fact, a rocket sled holds the land-based speed record for a vehicle, at Mach 8.5 (eight & a half times the speed of sound or (6,416 mph / 10,325 km/h)… now that’s pretty quick!