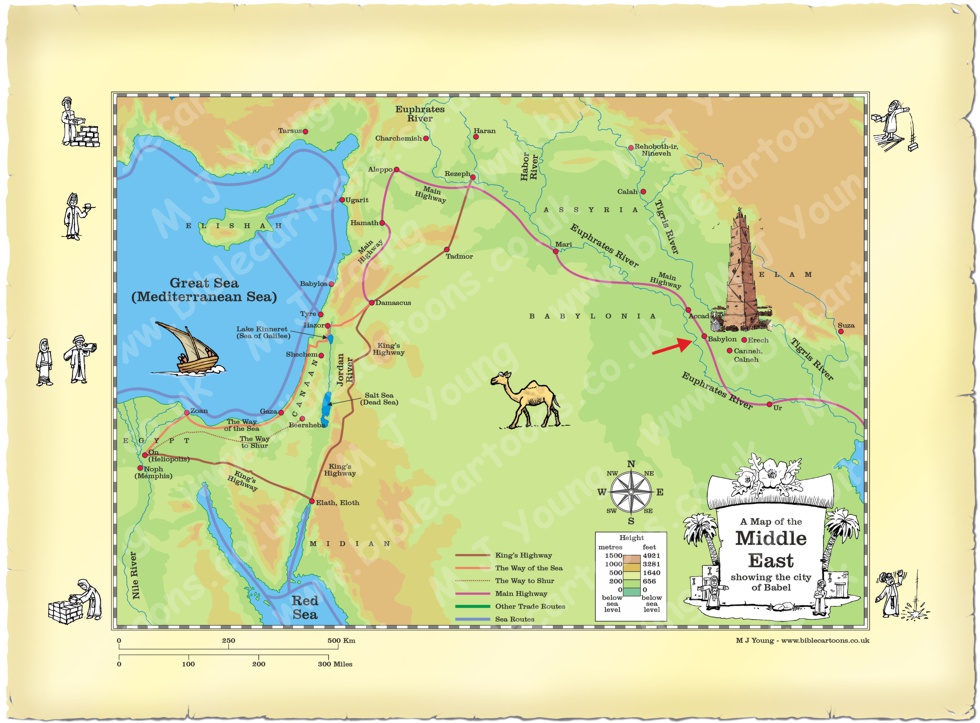 This is my map of the Middle East, showing the position of the city of Babel, which later became known as Babylon. Probably the most famous structure of the region is the tower of Babel. Genesis 11 tells us what the tower was constructed from (clay bricks & bituman tar, or naturally occurring asphalt) and why it was built: “a monument to our (own) greatness!” Pride came early to humanity!

The tower of Babel may well have been the very first version of a ziggurat. The Assyro-Babylonian word zigguratu, meaning “pinnacle” or “mountaintop”, a gigantic artificial mound of sun-dried bricks, built in step-like stages. The highest one was seven stories, although a common height was three stories. Ruins of more than two dozen ziggurats may still be seen in the Middle East.

Date
The Tower of Babel was probably constructed before 4000 B.C.

Notice the figures on the border of the map.
If you look carefully at the map border you will see I have included some little black and white figures. I will add different figures to the borders of each map, adding characters that relate to the map subject. For example, if you look at the top right area you will see a man on a high wooden platform throwing a brick over his shoulder. Below him (in the bottom right) is another man shouting up at the first one and waving an angry fist at him!
Several other figures are stacking bricks up, ready for construction.

Bible References
Genesis 11:1-4 (NLT)
1 At one time the whole world spoke a single language and used the same words. 2 As the people migrated eastward, they found a plain in the land of Babylonia and settled there. 3 They began to talk about construction projects. “Come,” they said, “let’s make great piles of burnt brick and collect natural asphalt to use as mortar. 4 Let’s build a great city with a tower that reaches to the skies—a monument to our greatness! This will bring us together and keep us from scattering all over the world.”