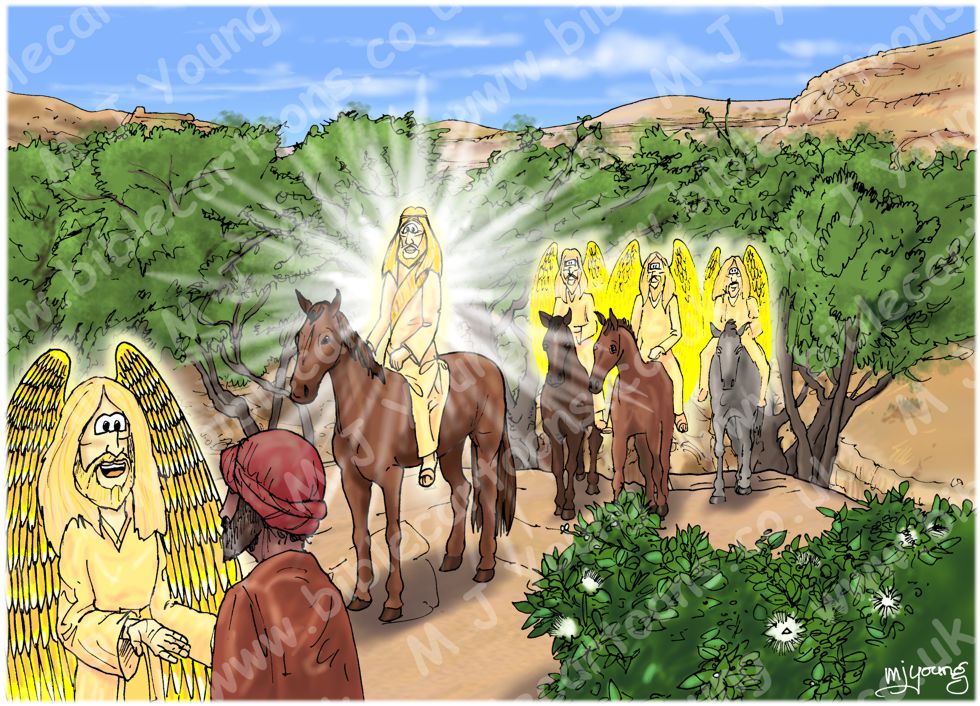 Zechariah 1:7-17 (ANIV)
[The man amongst the Myrtle trees]
7 On the twenty-fourth day of the eleventh month, the month of Shebat, in the second year of Darius, the word of the Lord came to the prophet Zechariah son of Berekiah, the son of Iddo.
8 During the night I had a vision—and there before me was a man riding a red horse! He was standing among the myrtle trees in a ravine. Behind him were red, brown and white horses.
9 I asked, “What are these, my lord?”
The angel who was talking with me answered, “I will show you what they are.”
10 Then the man standing among the myrtle trees explained, “They are the ones the Lord has sent to go throughout the earth.”
11 And they reported to the angel of the Lord, who was standing among the myrtle trees, “We have gone throughout the earth and found the whole world at rest and in peace.”
12 Then the angel of the Lord said, “Lord Almighty, how long will you withhold mercy from Jerusalem and from the towns of Judah, which you have been angry with these seventy years?” 13 So the Lord spoke kind and comforting words to the angel who talked with me.
14 Then the angel who was speaking to me said, “Proclaim this word: This is what the Lord Almighty says: ‘I am very jealous for Jerusalem and Zion, 15 but I am very angry with the nations that feel secure. I was only a little angry, but they added to the calamity.’
16 “Therefore, this is what the Lord says: ‘I will return to Jerusalem with mercy, and there my house will be rebuilt. And the measuring line will be stretched out over Jerusalem,’ declares the Lord Almighty.
17 “Proclaim further: This is what the Lord Almighty says: ‘My towns will again overflow with prosperity, and the Lord will again comfort Zion and choose Jerusalem.’ “

TIME OF DAY:
Verse 8 tells us that the prophet Zechariah had this vision at night, but I have decided to show the scene as a daytime vision picture.

LIGHTING NOTES:
The sun provides the illumination for this scene from above.

CHARACTERS PRESENT:
From left to right: the interpreting angel, Zechariah (in red) the Angel of the Lord (pre-incarnate Jesus) on a red horse, three angels on red, brown & white horseback. 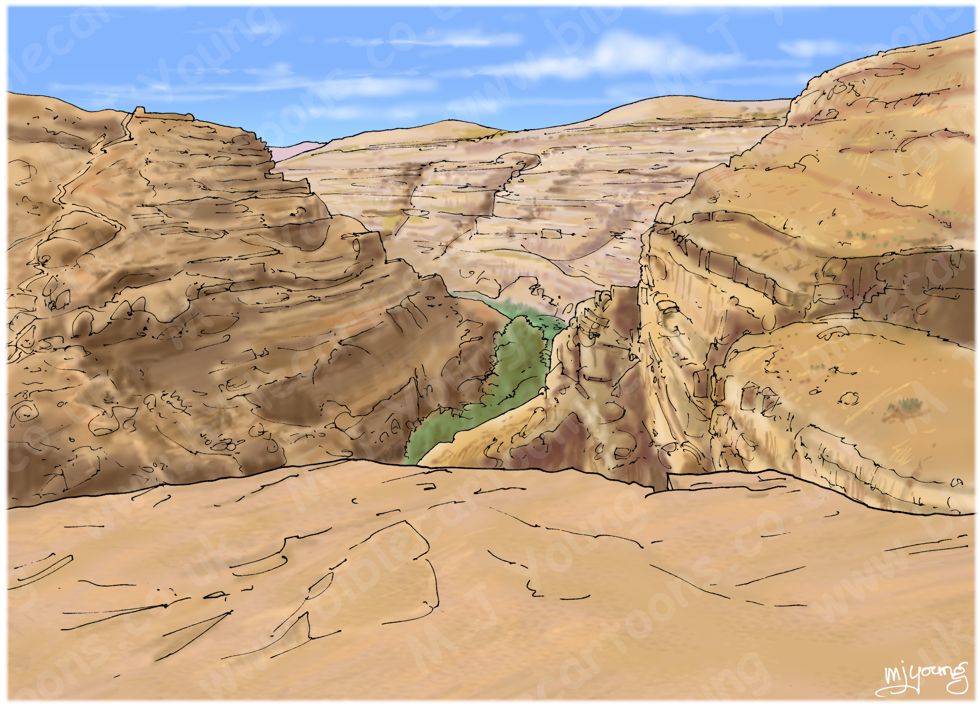 I thought I’d include the background without the figures & vegetation, so you can see the ravine more clearly. The figures & horses in the complete scene (see above) are standing on a raised, level piece of rocky outcrop, in the foreground.

Zechariah is called “the prophet of hope.” He was given 8 visions in the space of 1 night, that collectively look at the future for the Hebrew people during the coming centuries of pagan empire, to the coming of Messiah & the ultimate 2nd coming of Messiah.

Verse 7 informs us when Zechariah had this particular vision: 24th day of the 11th month. Although the 11th month name “Shebat” was Babylonian in origin, it was adopted by the Jews after the exile period. The 11th month of the Hebrew calendar is a 30 day period, which starts about half way through January & extends to about half way through February of the Gregorian calendar (today’s internationally accepted civil calendar, aka the “Western calendar” or “Christian calendar”.)

Things of note about the first vision.
01) Verse 8 begins “During the night I had a vision—”
Zechariah wasn’t asleep dreaming at night, which is apparent from the questions he posed (e.g. verse 9) and interruptions/suggestions (e.g. chapter 3, verse 5.)

All the visions included three things:
01) A description of what Zechariah saw (verse 8 above)
02) An explanation of what he saw the same (verses 9-11 above)
03) An intercession by the Angel of the Lord (verse 12 above.)

02) “… and there before me was a man…”
The man on the red horse is the focal point of the “action” in this scene. Verse 11 informs us that the others reported to him, making him at least an authoritative angel. He is identified in verse 11 as “the Angel of the Lord”; mal’ak Yĕhovah in Hebrew. The word “mal’ak” (Hebrew transliteration) means angel or messenger, & “Yĕhovah” is one of the names of God. This Messenger is either an angel, a chief angel, or may have been the pre-incarnate Christ, much as the leader of the heavenly host can be identified in that way (see my Bible Cartoon: Joshua 05 – Fall of Jericho – Scene 01 – Commander.)

03) “… riding a red horse!”
The Hebrew transliteration ‘adom can be translated red &/or ruddy, & can be used in reference to people, livestock (e.g. horse, heifer), to garments, water, vegetables (e.g. lentils), etc.

Bay (aka chestnut) is a hair coat colour of horses, characterized by a reddish-brown body colour with black “points”: mane, tail, ear edges, and lower legs. Bay is one of the most common coat colours in horse breeds.

It has been suggested by some Bible commentators that the red colour might refer to blood red, indicating the red horse as an emblem or symbolic of, war and bloodshed. Although that may be a viable proposition, the riders of the other horses (patrolling the earth) reported in verse 11, “We have gone throughout the earth and found the whole world at rest and in peace.”

I have decided to draw Myrtus communis (Common myrtle) in my picture.

“Common Myrtle is a medium-sized, fragrant, evergreen shrub. Its leaves are opposite, simple, leathery, elliptical and lack a petiole. Myrtus communis blooms in the summer with white flowers that have numerous stamens. The fruits are black berries.
The plant is rare in Israel as a wild plant, and is found as such in the Upper Galilee and the Golan Heights. It is extensively used as a domesticated plant in gardening.
The oil extracted from its leaves plays an important role in folk medicine. Myrtus communis has been in use since antiquity among the Jews as well as among other nations of the region: for ritual, medicine, perfume and incense. It is one of the four kinds blessed on Sukkoth.
Myrtus communis is the only representative of its family in Israel and in the Mediterranean region. The family is found mainly in Australia. Another representative of the family, which was brought and became acclimated to Israel, is the eucalyptus.”
[Source: http://www.wildflowers.co.il/english/plant.asp?ID=87]

Although the vision took place in late January/early February, & Common Mytle doesn’t flower until the summer, I decided to have the bush in bloom… after all, anything’s possible in a vision picture!

05) “… in a ravine.”
The ravine in the Bible quote above has been possibly identified with the Kidron Valley, which is east or southeast of Jerusalem. It is thought that these fragrant evergreen shrubs may have been abundant there.

I have found some reference photo’s of the Kiddron Valley, which form part of the background of my scene.

06) “Behind him were red, brown and white horses.”
Red (bay or reddish brown – see above), brown (sorrel), and white.

The Hebrew transliteration of brown is “saruq”, meaning sorrel, reddish, tawny &/or speckled. While the term is usually used to refer to a copper-red shade of chestnut, in some places it is used to refer to any reddish horse with a same-color or lighter mane and tail. Remember that a bay horse may have a similar colour body, but always has black “points” & in this detail is different from a sorrel horse.

This Hebrew word translated “brown” (NIV) or “speckled” (KJV) is onkly found once in the whole of the Old Testament (here in Zechariah chp 1), so that its meaning is not certain.

The Hebrew transliteration of white is “laban”.

The actual significance of the colours is not stated in the Bible quote above.

View all Bible Cartoons in Zechariah Go to Search by Bible Book page Do I need High or Medium qlty cartoons? FAQ’s