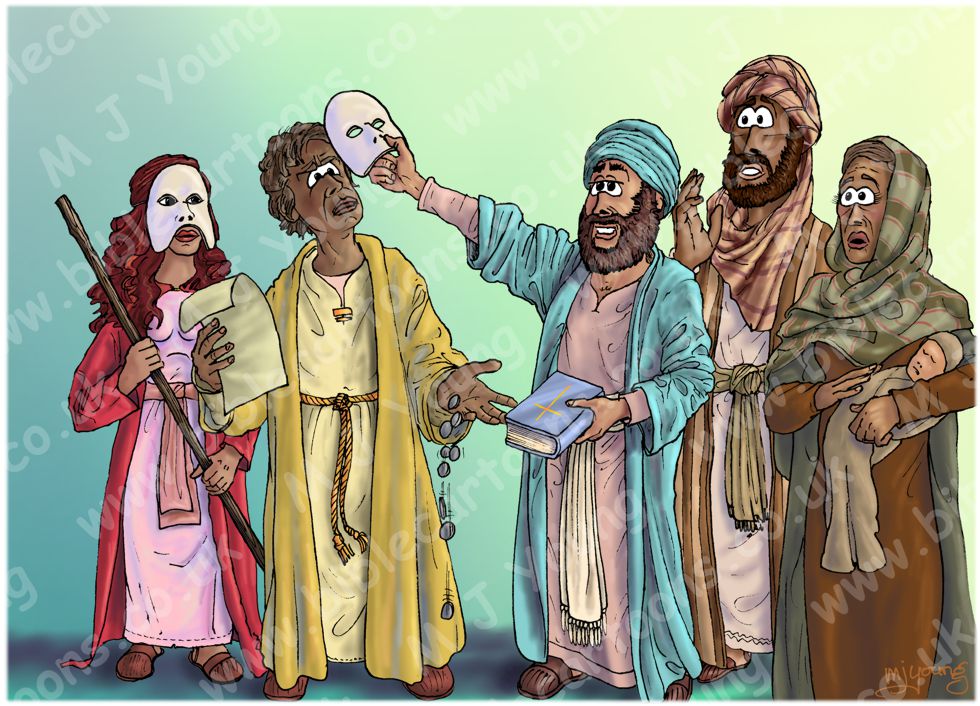 Titus 1:10-16 (ANIV)
10 For there are many rebellious people, mere talkers and deceivers, especially those of the circumcision group. 11 They must be silenced, because they are ruining whole households by teaching things they ought not to teach—and that for the sake of dishonest gain. 12 Even one of their own prophets has said, “Cretans are always liars, evil brutes, lazy gluttons.” 13 This testimony is true. Therefore, rebuke them sharply, so that they will be sound in the faith 14 and will pay no attention to Jewish myths or to the commands of those who reject the truth. 15 To the pure, all things are pure, but to those who are corrupted and do not believe, nothing is pure. In fact, both their minds and consciences are corrupted. 16 They claim to know God, but by their actions they deny him. They are detestable, disobedient and unfit for doing anything good.

LIGHTING NOTES:
Light from the right casts shadows to the left in this scene.

CHARACTERS PRESENT:
From left to right: a woman in a mask & a man having his mask taken off – these are representative of the “mere talkers & deceivers” mentioned in verse 10. Titus (in blue, unmasking the man), two fellow Christians, a man & a woman holding her baby.

RESEARCH/ADDITIONAL NOTES:
The cartoon illustration for this scene was inspired from reading Adam Clarke’s: A commentary & critical notes. He wrote the phrase “Unmask them at once;” in relation to verse 11, which really grabbed my attention, & provides the central action for the scene: Titus unmasking one of the rebellious talkers & deceivers. Below is the excerpt from Adam Clarke’s commentary:

“Whose mouths must be stopped—Unmask them at once; exhibit them to the people; make manifest their ignorance and hypocrisy; and let them be confounded before the people whom they are endeavoring to seduce.” – Adam Clarke’s: A commentary & critical notes.

A note about the Bible in this scene.
Although I have the Christian man holding a Bible, the book of the Bible didn’t actually exist at this early time in church history. Nevertheless I have illustrated the man holding a Bible (in bound book form), as a symbolic reference to his faith: the easiest way to visually identify a Christian in my work is to have a person carry a Bible, even if they didn’t exist yet!

Who was Titus?
“honourable, was with Paul and Barnabas at Antioch, and accompanied them to the council at Jerusalem ( Galatians 2:1-3 ; Acts 15:2 ), although his name nowhere occurs in the Acts of the Apostles. He appears to have been a Gentile, and to have been chiefly engaged in ministering to Gentiles; for Paul sternly refused to have him circumcised, inasmuch as in his case the cause of gospel liberty was at stake. We find him, at a later period, with Paul and Timothy at Ephesus, whence he was sent by Paul to Corinth for the purpose of getting the contributions of the church there in behalf of the poor saints at Jerusalem sent forward ( 2 Corinthians 8:6 ; 12:18 ). He rejoined the apostle when he was in Macedonia, and cheered him with the tidings he brought from Corinth ( 7:6-15 ). After this his name is not mentioned till after Paul’s first imprisonment, when we find him engaged in the organization of the church in Crete, where the apostle had left him for this purpose ( Titus 1:5 ). The last notice of him is in 2 Timothy 4:10 , where we find him with Paul at Rome during his second imprisonment. From Rome he was sent into Dalmatia, no doubt on some important missionary errand. We have no record of his death. He is not mentioned in the Acts.”
[Source: http://www.biblestudytools.com/dictionary/titus/
Easton’s Illustrated Dictionary]

Although the New Testament contains this letter from the apostle Paul to Titus, his name occurs most often in 2 Corinthians (10 times), twice in Galatians, once in 2 Timothy & once in the book addressed to Titus. Paul calls Titus his brother (2 Corinthians 2:13) and his true son (Titus 1:4.)

View all Bible Cartoons in Titus Go to Search by Bible Book page Do I need High or Medium qlty cartoons? FAQ’s