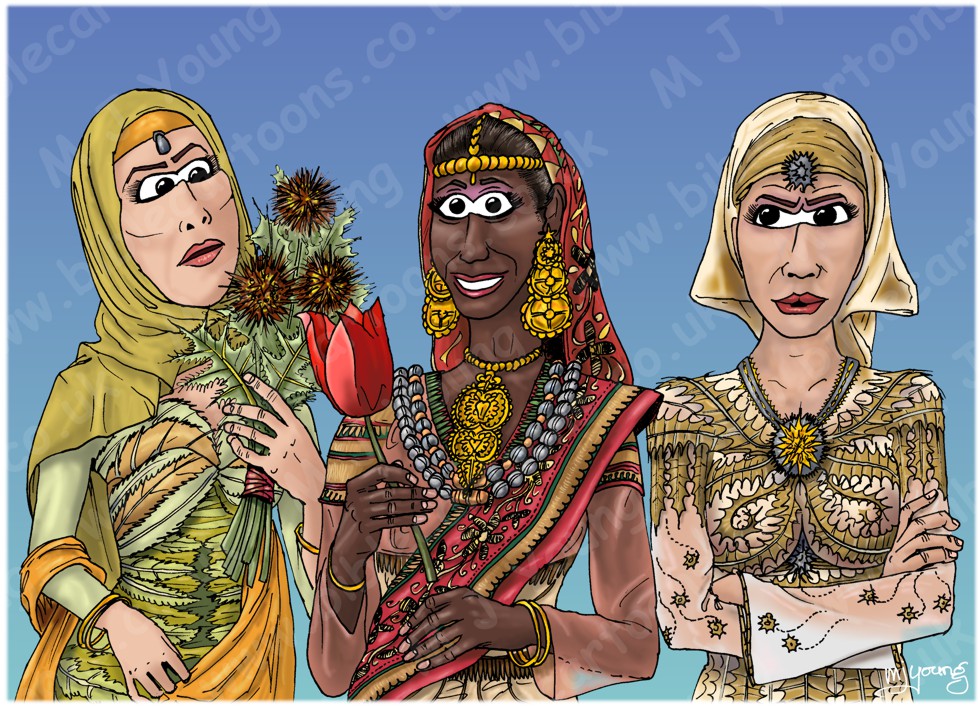 2 Lover
Like a lily among thorns
is my darling among the maidens.

[2]
Possibly a member of the crocus family.

TIME OF DAY:
Not specified in the Bible.

CHARACTERS PRESENT:
The “Lover” (in the centre of the picture) standing between 2 other women (the “”thorns”).

RESEARCH/ADDITIONAL NOTES:
In the Song of Songs (aka Song of Solomon) the “Beloved” is a woman, & the “Lover” is a man, possibly king Solomon who wrote this poem.

In referring to herself, the woman in the centre of my picture (The “Lover”) explains why she is dark. Chapter 1, verse 5-6 of Song on Songs is her explaining her skin tone:

Apparently the tents of Kedar are typically made of very dark or black animal skins. I have made the central woman’s skin dark for this reason.

What is the flower mentioned in Song of Songs?
There is some debate about what the “Rose of Sharon” actually is. Here are some different interpretations from various Bible’s:

Song of Songs 2:1-2 (NLT)
1 I am the spring crocus blooming on the Sharon Plain, the lily of the valley.
2 Like a lily among thistles is my darling among young women.

Song of Songs 2:1-2 (AMP)
1 [SHE SAID] I am only a little rose or autumn crocus of the plain of Sharon, or a [humble] lily of the valleys [that grows in deep and difficult places].
2 But Solomon replied, Like the lily among thorns, so are you, my love, among the daughters.

Song of Songs 2:1-2 (MSG)
1 I’m just a wildflower picked from the plains of Sharon, a lotus blossom from the valley pools.
2 A lotus blossoming in a swamp of weeds— that’s my dear friend among the girls in the village.

Song of Songs 2:1-2 (BBE)
1 I am a rose of Sharon, a flower of the valleys.
2 As the lily-flower among the thorns of the waste, so is my love among the daughters.

The Lover is variously described as a rose of Sharon, a spring crocus, a lily of the valley, or a little rose.
The other maidens are described as thistles, thorns, swamp reeds or brambles, by comparison to her.

Flowers of Israel has this to say regarding the identity of the Rose of Sharon (Hebrew: “Chavatzelet HaSharon”)

“Three flowers are mentioned by name in the Bible: the SHOSHAN or SHOSHANNA (lily or rose), SHOSHANAT HA’EMAKIM (rose of the valleys) and HAVATZELET HA’SHARON (rose or lily of the Sharon).
It is impossible that the Havatzelet or the Shoshan was a rose, for the rose was not found in Israel in Biblical times. The rose of Sharon (Song 2:1) is a mistranslation: Havatzelet is an onion-like flower bulb.

Which one is likely to have been the “Havatzelet” from the Bible? What is the exact identity of the two flowers mentioned herein?

Some people think that Solomon’s rose of Sharon is a tulip, either Tulipa montana, common in the mountainous regions of Syria and Lebanon, or its close relative, Tulipa sharonensis, found in sandy places on the Sharon coastal plain. Some have supposed the Narcissus tazetta, as the flower Solomon had in mind as Rose of Sharon.”
[Source: http://www.flowersinisrael.com/RoseofSharon_page.htm]

I have decide to illustrate the central woman holding a Tulipa sharonensis.

A note about the women’s clothes.
When I read these descriptions I decided to make the central woman bright, colourful & holding a flower, with the two outer women holding thistles (the woman on the left) &/or having their dresses made of material that looks like thistle leaves. The outer women’s clothes are the colour of dead thistle leaves, adding to the strong colour contrast with the vibrant, central woman & her costume. Thus the two outer women are “thorns” or “thistles”, with the Rose of Sharon (a Tulip) between them.

I also decided to have the two outer women looking haughty, prideful, or disdaining, as they gaze at the central woman, for added emotional contrast!

View all Bible Cartoons in Song of Songs Go to Search by Bible Book page Do I need High or Medium qlty cartoons? FAQ’s