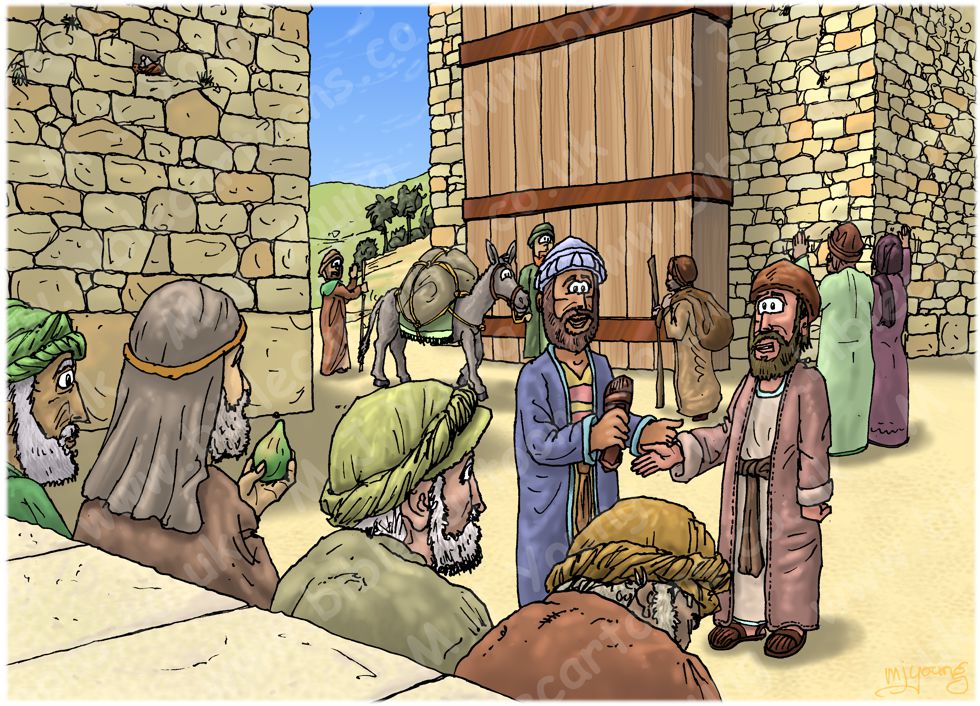 Ruth 4:1-22 (NLT)
Ruth marries Boaz
1 Boaz went to the town gate and took a seat there. Just then the family redeemer he had mentioned came by, so Boaz called out to him, “Come over here and sit down, friend. I want to talk to you.” So they sat down together. 2 Then Boaz called ten leaders from the town and asked them to sit as witnesses. 3 And Boaz said to the family redeemer, “You know Naomi, who came back from Moab. She is selling the land that belonged to our relative Elimelech. 4 I thought I should speak to you about it so that you can redeem it if you wish. If you want the land, then buy it here in the presence of these witnesses. But if you don’t want it, let me know right away, because I am next in line to redeem it after you.”
The man replied, “All right, I’ll redeem it.”
5 Then Boaz told him, “Of course, your purchase of the land from Naomi also requires that you marry Ruth, the Moabite widow. That way she can have children who will carry on her husband’s name and keep the land in the family.”
6 “Then I can’t redeem it,” the family redeemer replied, “because this might endanger my own estate. You redeem the land; I cannot do it.”
7 Now in those days it was the custom in Israel for anyone transferring a right of purchase to remove his sandal and hand it to the other party. This publicly validated the transaction. 8 So the other family redeemer drew off his sandal as he said to Boaz, “You buy the land.”
9 Then Boaz said to the elders and to the crowd standing around, “You are witnesses that today I have bought from Naomi all the property of Elimelech, Kilion, and Mahlon. 10 And with the land I have acquired Ruth, the Moabite widow of Mahlon, to be my wife. This way she can have a son to carry on the family name of her dead husband and to inherit the family property here in his hometown. You are all witnesses today.”
11 Then the elders and all the people standing in the gate replied, “We are witnesses! May the Lord make this woman who is coming into your home like Rachel and Leah, from whom all the nation of Israel descended! May you prosper in Ephrathah and be famous in Bethlehem. 12 And may the Lord give you descendants by this young woman who will be like those of our ancestor Perez, the son of Tamar and Judah.”

CHARACTERS PRESENT:
Boaz is the figure (in his usual blue outer robe) behind the four men we see sitting in the foreground, receiving the sandal from the family redeemer he had discussions with.
Various townspeople, going about their daily activities.

RESEARCH/ADDITIONAL NOTES:
I believe that judgements and negotiations (such as Boaz conducted with the other family redeemer) occurred near a town or city gate. I expect it was actually conducted in a cool room, off the gate courtyard area, rather than out in the open as I have illustrated the scene. However, I decided to make one of the gates of Bethlehem visible, so that we know where the “action” is taking place.

Verse 7 tells us that the act of publicly validating a transaction in Biblical times required one party to remove his sandal & give it to the other. Notice that I have Boaz holding the other man’s sandal… the deed is done!

Notice the man (in green) and woman (in purple) behind Boaz & the other family redeemer, waving goodbye to an unnamed man, who is just outside the city gate. I have also drawn a man leading a donkey walking into the town. I image there was quite a lot of hustle & bustle like this occurring throughout the day at such an important part of the town or city as it’s entrance gate.

Here’s the scene near the gate of Bethlehem, without the figures. 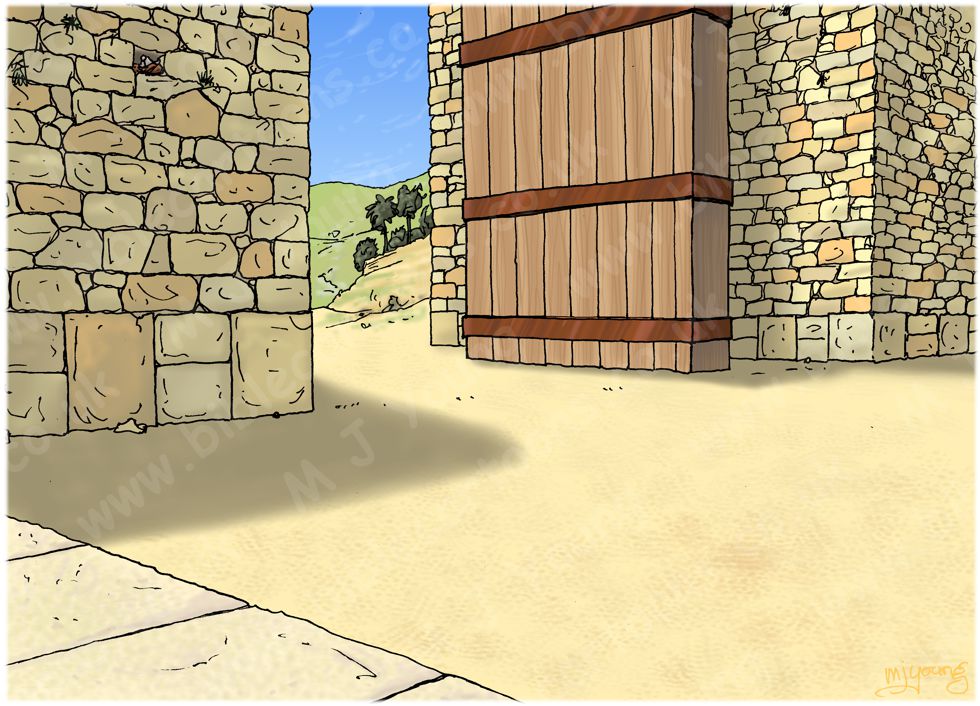