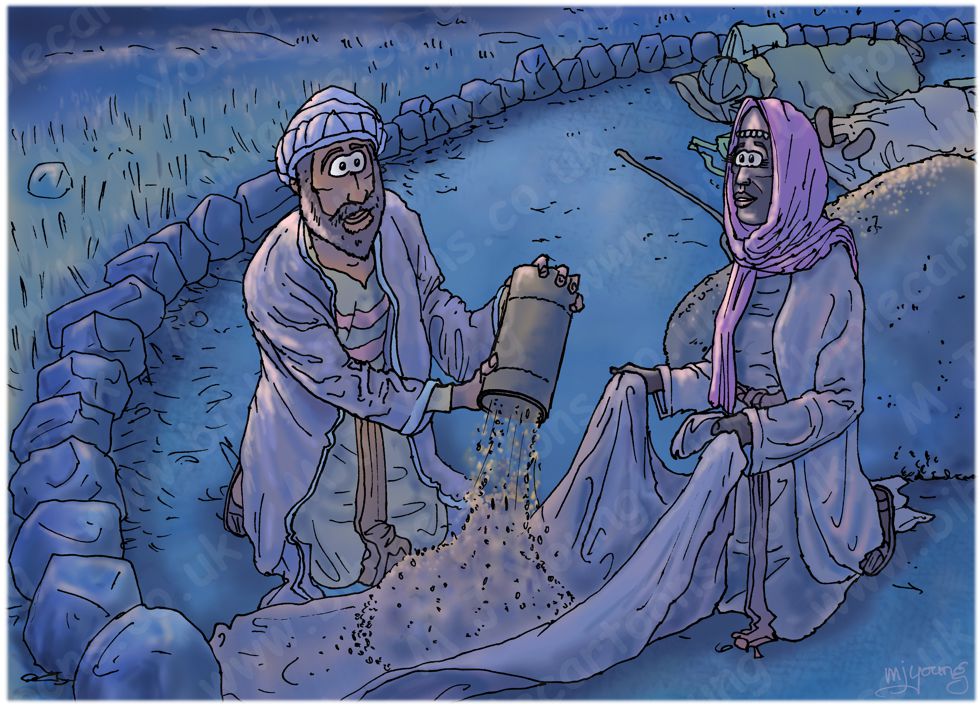 Ruth 3:14-18 (NLT)
14 So Ruth lay at Boaz’s feet until the morning, but she got up before it was light enough for people to recognize each other. For Boaz had said, “No one must know that a woman was here at the threshing floor.” 15 Then Boaz said to her, “Bring your cloak and spread it out.” He measured six scoops [1] of barley into the cloak and placed it on her back. Then he [2] returned to the town.
16 When Ruth went back to her mother-in-law, Naomi asked, “What happened, my daughter?”
Ruth told Naomi everything Boaz had done for her, 17 and she added, “He gave me these six scoops of barley and said, ‘Don’t go back to your mother-in-law empty-handed.’”
18 Then Naomi said to her, “Just be patient, my daughter, until we hear what happens. The man won’t rest until he has settled things today.”

LIGHTING NOTES:
This scene is lit quite dimly by a very feint pre-dawn glow in the eastern sky, which is behind the figures. You can see a pale pink edge to the figures, stones encircling the threshing floor, the pile of grain behind Ruth, etc, which is coming from the first hint of sunlight on this new day.

CHARACTERS PRESENT:
Boaz is on the left, with Ruth on the right.
In the background you can see two of Boaz’s harvesters asleep in the threshing floor circle.

RESEARCH/ADDITIONAL NOTES:
I used the same back ground which I drew for a previous Bible Cartoon “Ruth 03 – Threshing Floor – Scene 01 – Ruth at Boaz’s feet”. In this new scene I have included the first rays of the pre-dawn sun, which you can see on the edges of the figures of Ruth and Boaz in the foreground.

Verse 15 informs us that Boaz poured out six scoops of barley into Ruth’s cloak, as a present for her mother-in-law Naomi. In this scene we can see him pouring the barley grains into Ruth’s cloak.

Note: Boaz’s rucksack, lamp & bedding have been put away and so are unseen in this picture.