Bible Cartoon: Romans 08 - If God be for us, who can be against us? (Text version) 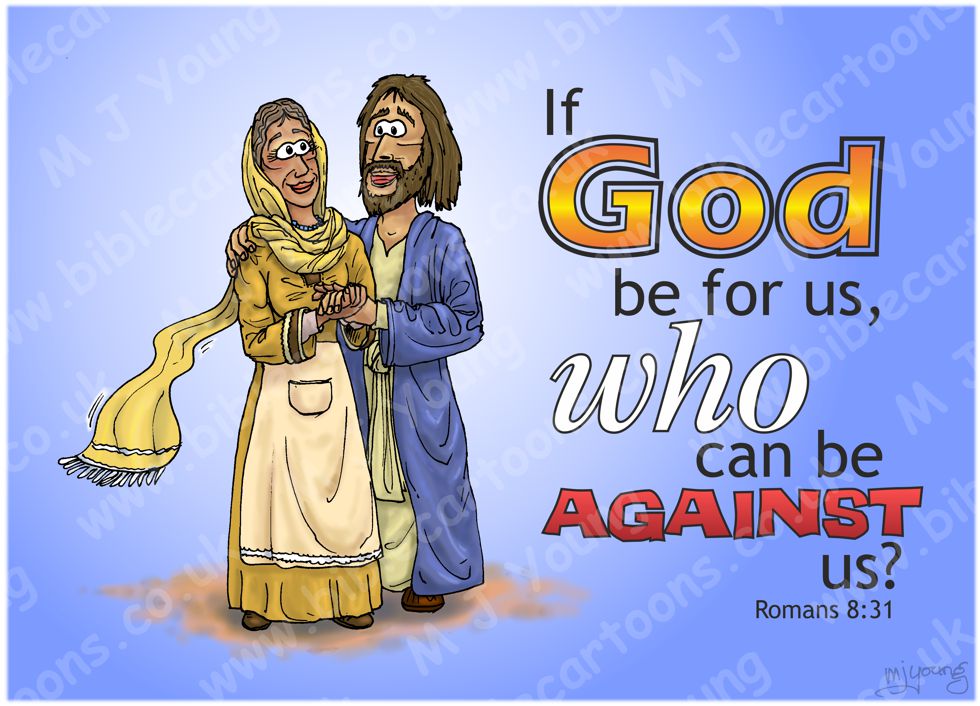 RESEARCH/ADDITIONAL NOTES:
There are two versions of this scene:
01) (Previous page) Romans 08 – If God be for us, who can be against us?.

I designed this Bible Cartoon (with the text) for a friend who is going through difficult times at the moment. Apparently this verse “If God is for us, who can be against us?” speaks powerfully into her life.

I wanted to show the figure of Jesus (on the right) holding and comforting the woman, which is what He does for all of us in times of trial, difficulty, stress and hardship in our lives.

The two questions in verse 31 ”What, then, shall we say in response to this? If God is for us, who can be against us? “ are the opening questions of 7, in all, that the apostle Paul asks in the “More than conquerors” section of Romans 8 (verses 28-39), which can be broken down and viewed like this in order to see the 7 questions:

Romans 8:28-35 (ANIV)
More than conquerors
28 And we know that in all things God works for the good of those who love him, [10] who [11] have been called according to his purpose. 29 For those God foreknew he also predestined to be conformed to the likeness of his Son, that he might be the firstborn among many brothers. 30 And those he predestined, he also called; those he called, he also justified; those he justified, he also glorified.

Q01) 31 What, then, shall we say in response to this?
Q02) If God is for us, who can be against us? 32 He who did not spare his own Son, but gave him up for us all—
Q03) how will he not also, along with him, graciously give us all things?
Q04) 33 Who will bring any charge against those whom God has chosen?
It is God who justifies.
Q05) 34 Who is he that condemns?
Christ Jesus, who died—more than that, who was raised to life—is at the right hand of God and is also interceding for us.
Q06) 35 Who shall separate us from the love of Christ?
Q07) Shall trouble or hardship or persecution or famine or nakedness or danger or sword?

Paul knew that in Jewish thinking, 7 was considered a perfect number. By posing 7 questions, all of which are answered in the negative, in essence he is saying that nothing can come between Jesus and our salvation.
The Bible quote goes on:

“For your sake we face death all day long;
we are considered as sheep to be slaughtered.” [1]

Here Paul is reminding his readers that people do indeed sometimes face physical challenges, even martyrdom for some, but even death does not separate us from the love of God, as verse 37-39 asserts:

Romans 8:37-39 (ANIV)
37 No, in all these things we are more than conquerors through him who loved us. 38 For I am convinced that neither death nor life, neither angels nor demons, [2] neither the present nor the future, nor any powers, 39 neither height nor depth, nor anything else in all creation, will be able to separate us from the love of God that is in Christ Jesus our Lord.

Above we see that the apostle Paul ends his discussion concerning believers’ safety in Jesus Christ (and the certainty of their sanctification) with a positive declaration: “No, in all these things we are more than conquerors through him who loved us.” He goes on to further state: “For I am convinced (perfect. tense, “I stand convinced”; cf. 15:14) that nothing can separate believers from the love of God.” It would be worth pointing out here that Paul is asserting that it is God’s love for believers, not their love for God, he is talking about (cf. v. 35).

The Bible Knowledge Commentary has a lovely section regarding the 10 items in Paul’s list of things which DO NOT separate us from the love of God – I’ll quote it here, I’ve broken down the text into separate lines, and numbered the 10 points to make it clearer to the reader:

“Paul’s list of 10 items begins with death, where the list of 7 items in verse 35 ended. These elements in God’s universe include the extremes of existence:

the extremes of created spiritual armies:
(3) angels and
(4) demons (angels would not and demons could not undo God’s relationship with His redeemed ones);

the extremes in space:
(8) height and
(9) depth (nothing overhead or underneath can suddenly come swooping down or up to sever believers from God’s love);

and
(10) everything in the entire created realm.

Absolutely nothing in His Creation can thwart His purpose for believers in Christ. What a climactic way to affirm the certainty of believers’ salvation!”
[source: Bible Knowledge Commentary]