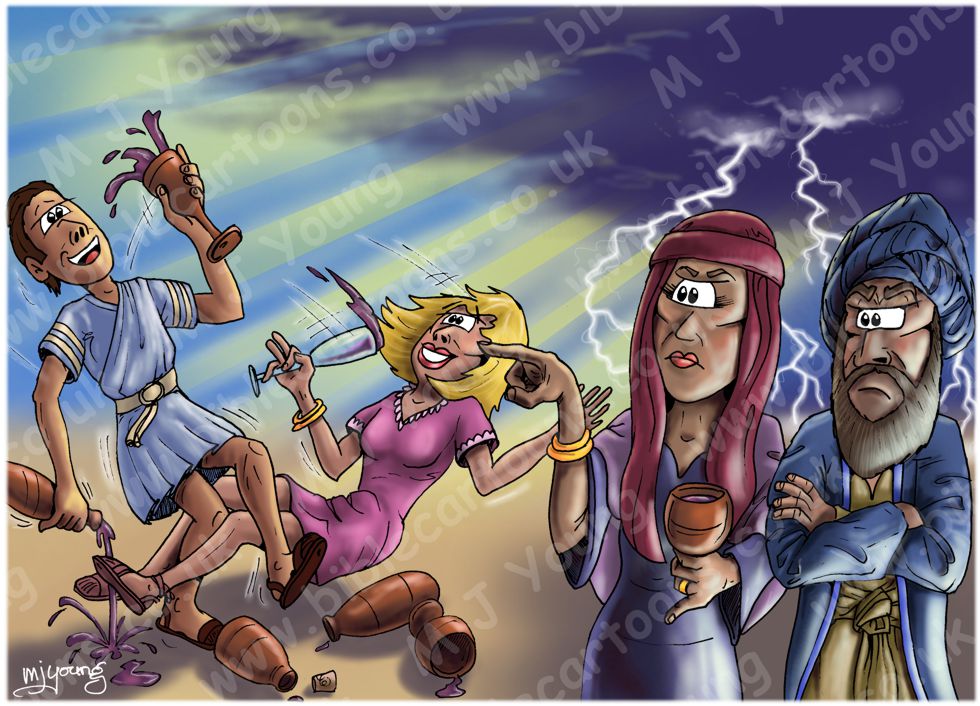 Romans 2:1-6 (ANIV)
1 You, therefore, have no excuse, you who pass judgment on someone else, for at whatever point you judge the other, you are condemning yourself, because you who pass judgment do the same things. 2 Now we know that God’s judgment against those who do such things is based on truth. 3 So when you, a mere man, pass judgment on them and yet do the same things, do you think you will escape God’s judgment? 4 Or do you show contempt for the riches of his kindness, tolerance and patience, not realising that God’s kindness leads you towards repentance?
5 But because of your stubbornness and your unrepentant heart, you are storing up wrath against yourself for the day of God’s wrath, when his righteous judgment will be revealed. 6 God “will give to each person according to what he has done”. [1]

LIGHTING NOTES:
Lighting for this scene comes from two sources: 1) a hidden sun, behind the dark clouds to the upper right & 2) from a hidden source in the bottom right, which casts a green-tinged white glow particularly on the judgmental Hebrew couple. That second (hidden) source of light in the scene creates an up-light particularly on the Jewish couple, which makes the scene more interesting to view than just relying on the sun’s light rays as a single source of light.

CHARACTERS PRESENT:
Two people who have had too much wine to drink. They are falling over on the left of the scene. The man is dressed like a Roman citizen from Jesus’ time, whereas the woman could be from our modern time.

Two Hebrew people (Jews) who are looking & pointing in judgement, both are wearing clothing from Jesus’ time (1st Century AD.)

RESEARCH/ADDITIONAL NOTES:
The apostle Paul wrote of God’s wrath against mankind in chapter 1, but in chapter 2 Paul is writing specifically to his Hebrew (Jewish) readers. In verse 1 Paul writes, “You, therefore, have no excuse, you who pass judgment on someone else, for at whatever point you judge the other, you are condemning yourself, because you who pass judgment do the same things.” In light of that statement I have drawn the Jewish couple pointing & looking superior, with expressions of judgement & disapproval on their faces, as they look at the drunken couple. Notice the dark cloud is forming above the Jewish couple though. The cloud above, & especially the lightning behind, the Hebrew couple is representative of God’s coming judgement on them.

I deliberately drew both a man & woman getting drunk, & a Hebrew (Jewish) man & woman looking disapprovingly at them. God’s judgment will be for/against both men & women equally.

I also deliberately gave the Jewish woman & the drunken women the same gold bracelet, and both are drinking red wine, to show that the Jewish couple are actually doing/being the same things they so clearly disapprove of! Hence God’s coming judgement will be quite a surprise for the Jewish couple!

Why show a couple getting drunk?
This cartoon illustration shows people getting drunk, but it is not specifically about that. I have used a couple drinking too much wine & falling over, simply because it is a very obvious, visually compelling illustrative subject, but the couple are actually representitive of any & all sinful behaviour, not just getting drunk. It would be a lot more difficult to show some other sinful behaviours, such as lust, or parental disrespect, slander, wrong motives, etc, whilst the couple getting drunk offers easy to understand visual opportunity to represent all sinful behaviours. There are lots of sins I could have drawn of course: the list of evil, self-righteous, hurtful, degrading, damaging, human activities is v-e-r-y long! However, I thought that showing acts of violence (murder, war), drug-use, rape, etc would be too graphic for me to show & not in keeping with the other cartoon illustrations I have on display on this website. Therefore, after some consideration, I choose a couple getting drunk for this picture.

The wider picture of sin… & what can be done about it!
To be fair, we know from the Bible that everyone will be judged by God, both Jews & gentiles (non-Jews) & that our actions will be judged. We know that because in verse 6 of the above scripture it says, ‘God “will give to each person according to what he has done”. [Psalm 62:12, Proverbs 24:12]’

Regarding our attitude towards others, Paul says in verse 5, ‘But because of your stubbornness and your unrepentant heart, you are storing up wrath against yourself for the day of God’s wrath, when his righteous judgment will be revealed.’ If we maintain a stubborn attitude towards God’s offer of salvation (through the cross of Jesus Christ) & we do not repent of our sin (wrong-doings) then the only possible outcome for us will be the judgement of God upon us. All people will be judged. However, other verses in Romans (& other Bible books) also tell us that we can avoid God’s judgement. How do we do that? Romans 10:9-13 makes that clear:

Romans 10:9-13 (ANIV)
9 That if you confess with your mouth, “Jesus is Lord,” and believe in your heart that God raised him from the dead, you will be saved.
10 For it is with your heart that you believe and are justified, and it is with your mouth that you confess and are saved.
11 As the Scripture says, “Anyone who trusts in him will never be put to shame.” [Isaiah 28:16]
12 For there is no difference between Jew and Gentile—the same Lord is Lord of all and richly blesses all who call on him,
13 for, “Everyone who calls on the name of the Lord will be saved.” [Joel 2:32]

That last verse is SO important, for it asserts that ANYONE who calls on the name of the Lord will be saved. That simply means recognizing that we have sinned; that we can not remove our own sin; that we therefore need someone else to remove that sin for us; that Jesus came to earth & died in order to remove that sin from us; and that, therefore, if we accept that free gift of God (through Jesus) & believe that He died for us, then our sin is removed & we are then in right relationship with God. At that point (when we become a Christian) we are right with God, & there will be no awful judgement upon us, because Jesus has taken all of our sin away: past, present & future. No THAT’S what I call GOOD NEWS!