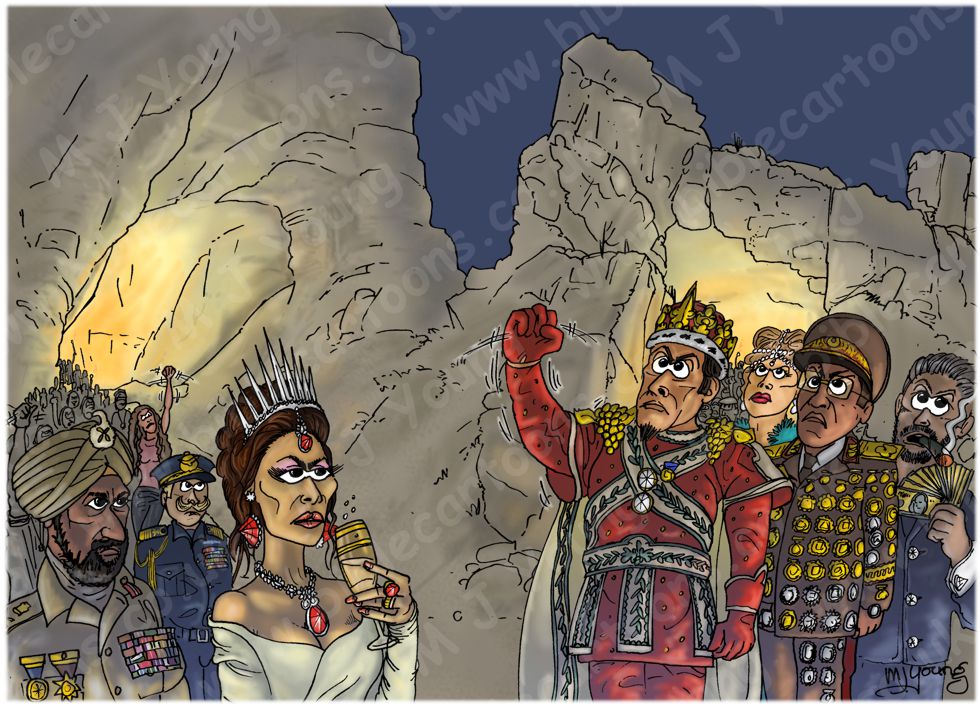 Revelation 6:15-17 (ANIV)
15 Then the kings of the earth, the princes, the generals, the rich, the mighty, and every slave and every free man hid in caves and among the rocks of the mountains. 16 They called to the mountains and the rocks, “Fall on us and hide us from the face of him who sits on the throne and from the wrath of the Lamb! 17 For the great day of their wrath has come, and who can stand?”

LIGHTING NOTES:
The main source of yellow light comes from torches in the two caves behind the figures.
A subtle, secondary source of light is unseen in the foreground, which is bathing the figures in a pale blue glow. I selected that colour as it provides a contrast to the warm yellow glow of the torch light coming from the caves.

Note: in the previous scene (Revelation 6:12-14, the normal sources of light in our world (the sun, moon and stars) have been darkened/removed, so obviously they can’t be sources of natural light in this, later scene.

CHARACTERS PRESENT:
A variety of people: a king, generals, a rich man, various women – see below for comments.

RESEARCH/ADDITIONAL NOTES:
Although verse 16 gives the impression that the people were fearful of God (”hide us from the face of him who sits on the throne…”) I decided to illustrate them in this scene with rebellious, angry, resentful expressions, since all that has come before (the plagues and judgements of God against the people of earth) has not produced an attitude of remorse and repentance in the people of the world.

I wanted to illustrate all the people types mentioned in verse 15. The list in this verse seems to run from the most powerful and influential (kings, princes, generals) to the weakest and/or least influential (slave and free men). I expect that is deliberate, since that single sentence includes all the types of people we can imagine. I wanted to represent all nations and people types in this picture, so have men, women, young and older people, people of differing nationalities, etc.

The king can be seen on the right of the scene, wearing opulent red robes, a crown, gold and jewels. He is raising and shaking his fist against God in my scene: rebellious to the end.

The “generals” from verse 15 are represented by several characters in my picture. The man on the left was inspired from a photograph I found on the internet of a Sikh general from the Second World War (I think). Behind him is a Royal Air Force (RAF) Air Marshall.
On the right of this scene, by the king, is a far eastern general. I found a photograph on the internet that was helpful in designing this character. You might think I have exaggerated all those medals across his tunic, and even running down his trouser leg, but I can assure you that this is taken straight from a photograph of actual “generals”! I must admit I laughed when I saw all those medals – and so had to include that in my scene.

The “rich” from verse 15 are represented by the man on the right of the scene, with a cigar in his mouth, expensive blue suit (complete with diamonds as buttons!) and a handful of US Dollar notes in his hand. No doubt he mistakenly believes that his wealth will save him on God’s Judgement Day.

I have drawn several women in this scene. The first to note is the rather sour looking woman in the left foreground. She might be an actress or member of some royal family, or else some “famous” person. She is bedecked with a crown, huge jewellery and is drinking the finest champagne.
Another woman to note is the one on the right, behind the king. We can’t see much of her, but she is based on a young 1920’s socialite, complete with pearls in her hair and a bright blue feather gown.
I represented younger females in my scene in the figure of the women in leather trousers, a pink top, long hair and arm raised in an angry expression of defiance towards the heavens.

Reflecting on what many, many people consider important in life: medals, honours, fame, beauty, money, etc, I am amazed that so many people in the world chase after these things; devoting their lives in pursuit of these things, which will do them good at all on Judgement Day. The Bible is very clear that pursuing such temporary things will do no-one any good, since admission to, or exclusion from the presence of God is not achieved by fame, wealth, beauty, or anything else. Our eternal lives can only be secured by repenting of our wrong doing (sins) and accepting Jesus the Christ as our Saviour and Lord.


I like the commentary below, and can not improve upon the sentiment included, so I’ll quote it here…

(”15-17) And the kings . . .—Translate, And the kings of the earth, and the magnates, and the commanders of hosts, and the wealthy, and the strong, and every man, bond and free, hid themselves (going) into the caves and into the rocks of the mountains; and say to the mountains and to the rocks, Fall on us, and hide us from the face of Him that sitteth upon the throne, and from the wrath of the Lamb: for the day, the great (day) of His wrath came (or, is come); and who is able to stand? In the list of the great ones here we may notice the descending order—kings, magnates or statesmen, generals, rich men, strong men, bond and free men. The terror strikes into every class: monarchs and their advisers, the statesmen and diplomatists, the commanders of troops, the merchant princes, the men of ability, as well as the obscurer orders of society. Neither royalty, nor rank, nor force of arms, nor opulence, nor talent, nor strength, either of intellect or frame, avail in that crisis; neither does insignificance escape in that day when God brings to light the hidden things. The tests of God are spiritual, as the weapons of God’s war are not carnal. Men who have relied upon wealth, rank, or power, have prepared themselves against one form of trial, but find themselves unarmed in the day of spiritual testing. Like Macbeth, they are unable to fight with the unexpected shape which haunts them. They would rather meet the bodily foe, “who would dare them to the desert with a sword.”

Thus in the final day of judgment the revealing of the spiritual order of all life will confound men whose minds have been blinded by their entire absorption in world-splendours and world-powers. Nor is it merely the unveiling of the forgotten spiritual order which will confound them. The advent is of a Person. It is more than the manifestation of the kingdom of Him who all this while had been King on His throne, and whom they had forgotten—it is the revealing of God’s Son from heaven. It is not without significance that He is described as the Lamb. In that day of His wrath, it is not as a Judge who has laid aside the tokens of His humiliation and suffering: it is as the Lamb. He whom they now shrink from is He who came meek as a lamb, gentle, pure, and suffering on their behalf. He whom they now behold with dismay is He whom they treated with neglect, and whose love they spurned.”
[source: Ellicott’s Commentary for English Readers. Emphasis by MY.]