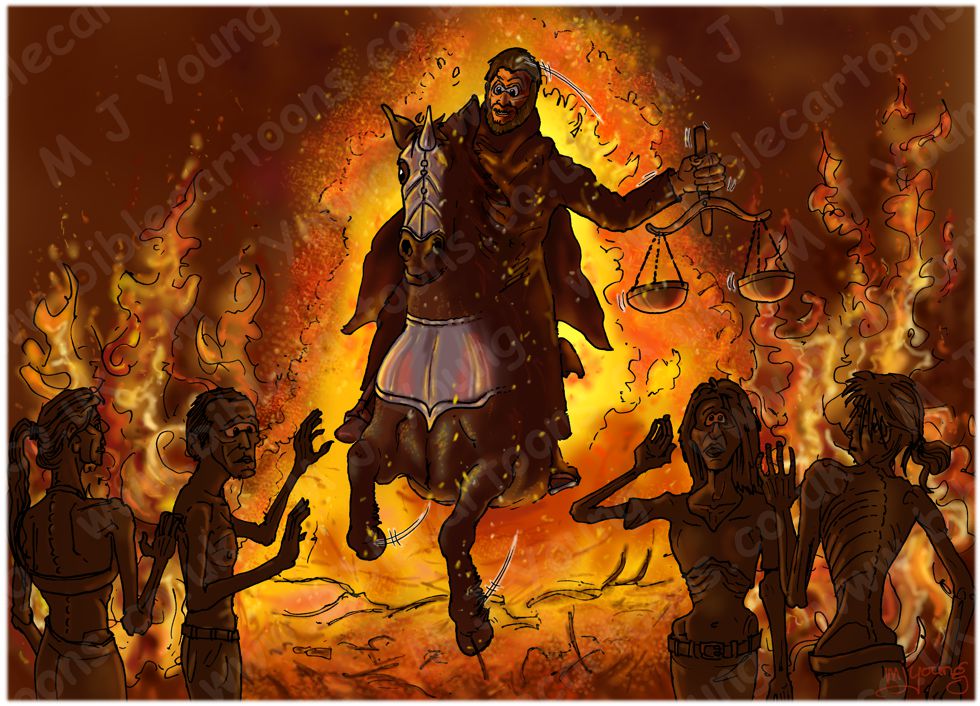 Revelation 6:5-6 (ANIV)
5 When the Lamb opened the third seal, I heard the third living creature say, “Come!” I looked, and there before me was a black horse! Its rider was holding a pair of scales in his hand. 6 Then I heard what sounded like a voice among the four living creatures, saying, “A quart [1] of wheat for a day’s wages, [2] and three quarts of barley for a day’s wages, [3] and do not damage the oil and the wine!”

LIGHTING NOTES:
The fire, through which the horse and rider are jumping provides the light for this scene.

CHARACTERS PRESENT:
The rider on the black horse.

There are three versions of this scene:
01) (2 pages previous) Revelation 06 – The Scroll seals – Scene 03 – Third seal: Black rider (with scroll).

The only difference between the first two versions is the inclusion or absence of the 7 seal scroll in the bottom left corner of the scene. I wondered if it might detract from the overall impact of the scene for some viewers, hence its absence in the 2nd version.

The lady in the USA who commissioned these scenes wanted thin people in the scene, who represent the victims of plague and pestilence following the first two riders. This third version of the scene also doesn’t have the scroll in the bottom left hand corner.
I found some photographs of anorexic people on the internet, which provided the basis of the figures in my drawing. It is so sad to see real people suffering in this way.

This scene focusses on the rider of the black horse. I found a striking photograph on the internet or a horse jumping through fire, which forms the basis of this scene. I have also added additional flames to the right and left of the horse.

With the opening of the third seal a black horse was revealed in the apostle John’s vision, with a rider carrying a pair of scales in his hand. At the same time as the horse sets out, a voice was heard from among the four living creatures saying, “A quart of wheat for a day’s wages, and three quarts of barley for a day’s wages, and do not damage the oil and the wine!” It is believed that “A day’s wages” refers to a silver Roman coin, the denarius, which was the normal wage for a full day’s work. This passage is representing severe food shortage, and high prices for the meagre food that is available. Famine is the inevitable aftermath of war (the first two riders may have represented war in the Great Tribulation). The black colour of the horse may represent famine and death.

The viewer can’t see very much of the horse and rider, due to the glare of the fire. Notice that the horse has armour, as the other’s do in my scenes. The strong light and shade helps to add mystery, suspense and drama to the scene. I enjoyed drawing the fire and the reflections of it in the horses breastplate armour was fun to work out. 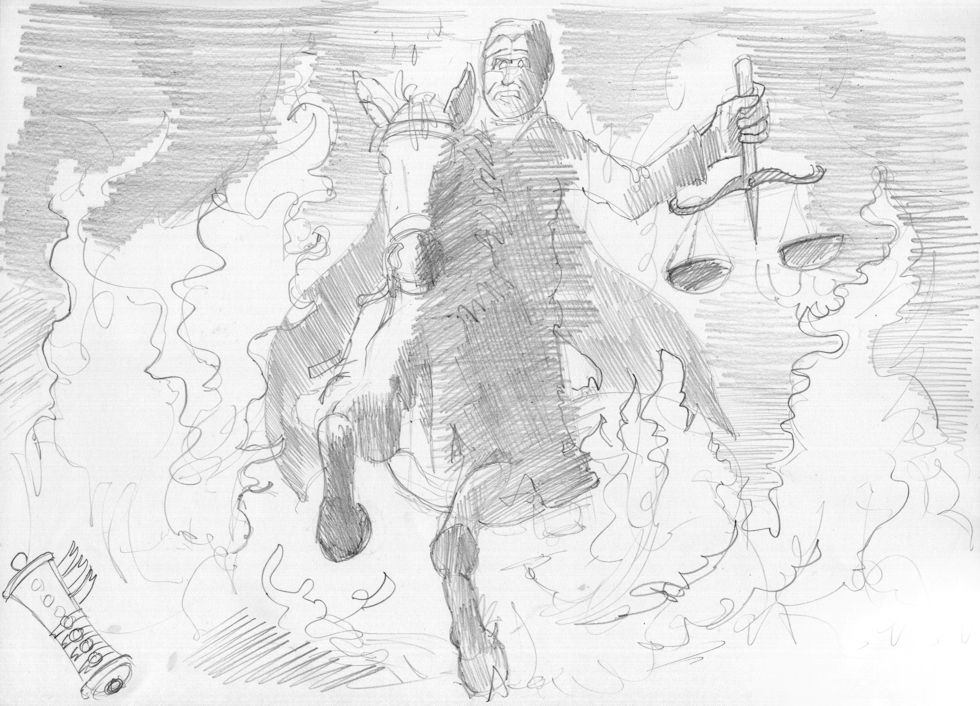