Bible Cartoon: Revelation 05 - The Scroll and the Lamb - Scene 04 - The Lamb (without blood) 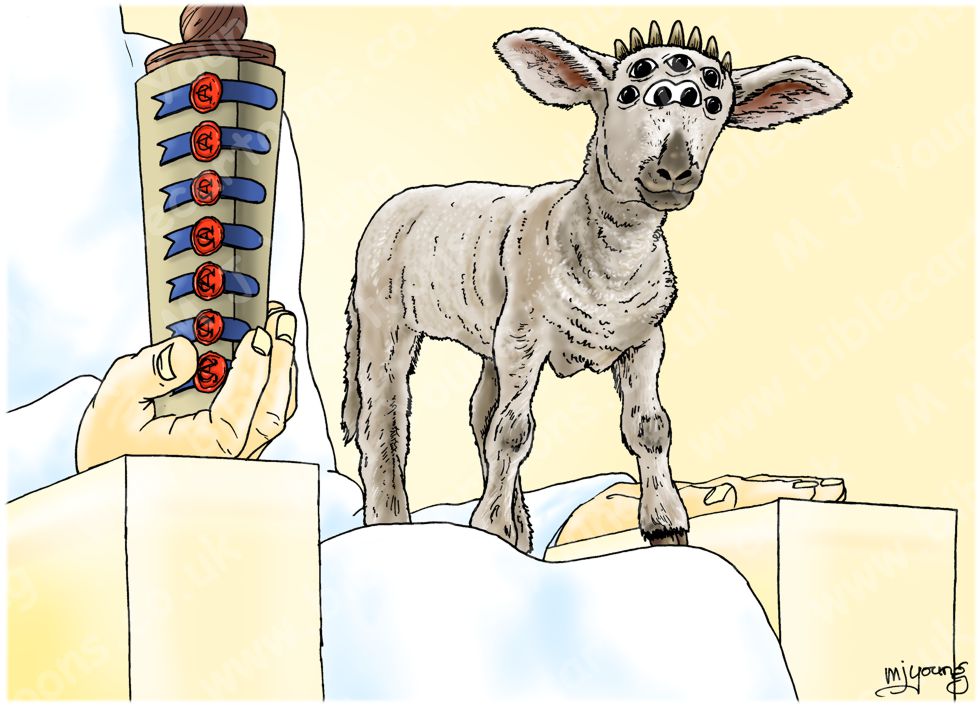 Revelation 5:6 (ANIV)
Then I saw a Lamb, looking as if it had been slain, standing in the centre of the throne, encircled by the four living creatures and the elders. He had seven horns and seven eyes, which are the seven spirits [1] of God sent out into all the earth.

LIGHTING NOTES:
The figure of the Father, seated on the throne is the source of light in this scene.

CHARACTERS PRESENT:
The Father, on the throne, the Lamb, on the Father’s knee.

RESEARCH/ADDITIONAL NOTES:
There are two versions of this scene:
01) (Previous page) Revelation 05 – The Scroll and the Lamb – Scene 04 – The Lamb (with blood).

The only difference between the scenes is the blood in the first version. I include it because verse 6 states “…a Lamb, looking as if it had been slain”. The only way to show that sacrificial lamb’s state is with blood. I have included the 2nd version for viewers and customers who don’t want to use the scene with blood present.

It was strange drawing a cute, fluffy lamb which has seven eyes and seven horns, but that’s the Bible description, so I had to illustrate it that way.

Rather than comment on the significance of the symbolism of the lamb, seven eyes and seven horns, I’ll simply quote from the Bible Knowledge Commentary here:

“The Lamb (5:6-7)
5:6-7. Though introduced as a “Lion” (v. 5), what John saw was a Lamb that appeared to have been slain or sacrificed. Yet the Lamb was standing in the center of the throne. About Him were the 24 elders and the four living creatures. The Lamb had seven horns and seven eyes.

The Lion and the Lamb surely refer to Christ, with the Lamb referring to His first coming and His death and the Lion referring to His second coming and His sovereign judgment of the world. This is the only place in Revelation where Christ is called a Lion, whereas the word “Lamb” (arnion, “a small or young lamb”) is found 27 times in Revelation and nowhere else in the New Testament. But two similar words for a sacrificial lamb are used in the New Testament: arēn, found only in Luke 10:3, and amnos, which occurs four times (John 1:29, 36; Acts 8:32; 1 Peter 1:19).