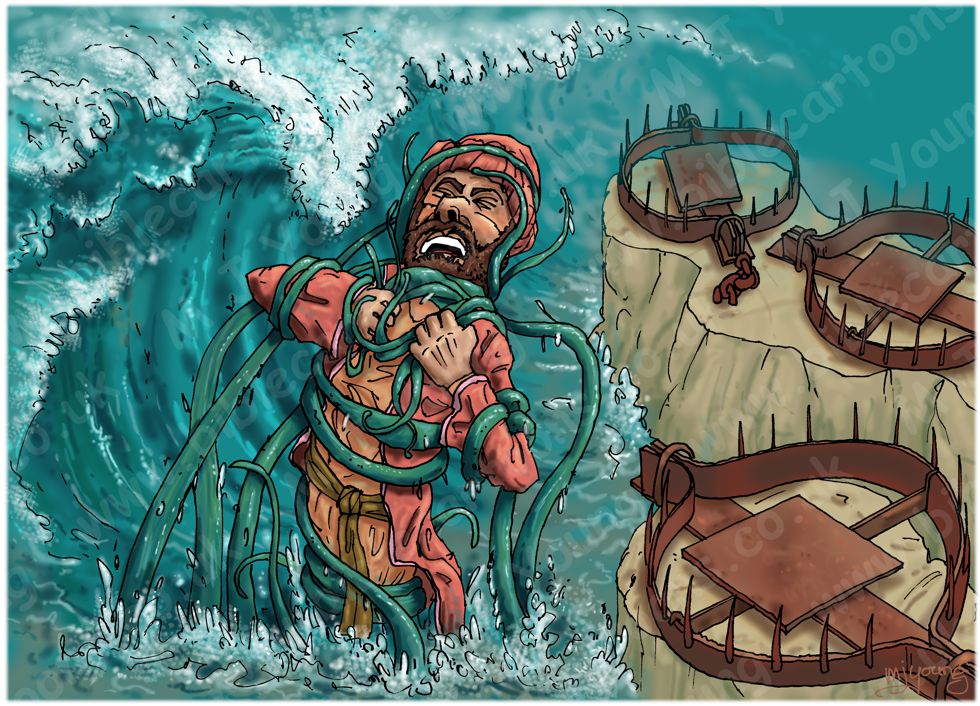 Psalms 18:4-6 (ANIV)
4 The cords of death entangled me;
the torrents of destruction overwhelmed me.
5 The cords of the grave [2] coiled around me;
the snares of death confronted me.
6 In my distress I called to the Lord;
I cried to my God for help.
From his temple he heard my voice;
my cry came before him, into his ears.

LIGHTING NOTES:
Sunlight from high above and right illuminates this scene. Shadows are cast to the left of figures and objects.

Although this psalm is described as a psalm of thanksgiving, this particular part (verses 4-6) outlines how the psalmist was feeling, and describes some shocking, graphic and terrible feelings/situations. He speaks of “The cords of death and the grave (Hebrew. Sheol) entangled me” which I have depicted in my scene as tentacles thrust up from the sea and coiling around the man, which he is desperately trying to fight off as they coil and squeeze his neck, head, body and arms. The psalmist writes, “the torrents of destruction overwhelmed me” which I have illustrated by placing a gigantic foaming sea wave just about to crash down on the man.

As if that wasn’t bad enough, the psalmist goes on to say, “the snares of death confronted me”, which I have illustrated by placing iron man traps on the only islands of land visible to the man! I made the traps look threatening by adding long needle-like teeth and making them look like heavy, rusty metal.

It doesn’t look like the psalmist has much hope of escaping this situation with his life intact… but wait, this psalm isn’t over yet!