Bible Cartoon: Psalm 09 - Gates of death and gates of the Daughter of Zion

I will praise you, O Lord, with all my heart;
I will tell of all your wonders.
2 I will be glad and rejoice in you;
I will sing praise to your name, O Most High.

3 My enemies turn back;
they stumble and perish before you.
4 For you have upheld my right and my cause;
you have sat on your throne, judging righteously.
5 You have rebuked the nations and destroyed the wicked;
you have blotted out their name for ever and ever.
6 Endless ruin has overtaken the enemy,
you have uprooted their cities;
even the memory of them has perished.

7 The Lord reigns for ever;
he has established his throne for judgment.
8 He will judge the world in righteousness;
he will govern the peoples with justice.
9 The Lord is a refuge for the oppressed,
a stronghold in times of trouble.
10 Those who know your name will trust in you,
for you, Lord, have never forsaken those who seek you.

11 Sing praises to the Lord, enthroned in Zion;
proclaim among the nations what he has done.
12 For he who avenges blood remembers;
he does not ignore the cry of the afflicted.

13 O Lord, see how my enemies persecute me!
Have mercy and lift me up from the gates of death,
14 that I may declare your praises
in the gates of the Daughter of Zion
and there rejoice in your salvation.
15 The nations have fallen into the pit they have dug;
their feet are caught in the net they have hidden.
16 The Lord is known by his justice;
the wicked are ensnared by the work of their hands.

17 The wicked return to the grave, [3]
all the nations that forget God.
18 But the needy will not always be forgotten,
nor the hope of the afflicted ever perish.

[1]
Psalm 9-10 may have originally been a single acrostic poem, the stanzas of which begin with the successive letters of the Hebrew alphabet. In the Septuagint they constitute one poem.

[2]
Or, Meditation; possibly a musical notation.

LIGHTING NOTES:
The light comes from the right side, casting shadows to the left hand side in both halves of this duel scene.

RESEARCH/ADDITIONAL NOTES:
Psalm 09 is an example of a psalm of Thanksgiving, which describe a situation of distress & how God delivered the psalmist.

“The gates of the Daughter of Zion” are represented by the stone archway on the right hand side of the scene. Two symbolic angel figures have been carved out of the stone blocks that make the archway. Light (from heaven?) is flooding out of the archway. Two people (again, a man and a woman) are walking confidently into the archway, towards God our Heavenly Father.

What are the gates of the Daughter of Zion?
The gates of death we can understand as the point in life when we physically die and pass from life to death. But what does the phrase “the gates of the daughters of Zion” mean?

Zion is a place name often used as a synonym for Jerusalem as well as for the biblical Land of Israel as a whole.

14 Save me, so I can praise you publicly at Jerusalem’s gates,
so I can rejoice that you have rescued me.

According to that, it Zion refers to the gates of Jerusalem.

Psalms 9:13-14 (BBE)
13 Have mercy on me, O Lord, and see how I am troubled by my haters; let me be lifted up from the doors of death;
14 So that I may make clear all your praise in the house of the daughter of Zion: I will be glad because of your salvation.

David (this psalm writer) felt he was In danger of dying, or else he actually was facing real danger of death, at this point in his life. He asks God to rescue him from death, and, if delivered, David could then praise the Lord in the gates of the Daughter of Zion (i.e., the tabernacle in Jerusalem).

The Bible in Basic English (BBE) refers to the house of the daughter of Zion, which might refer to the temple in Jerusalem.

“Zion has a threefold significance in the Bible apart from its original historical significance.

David’s City. In the OT Zion refers to Jerusalem, the city that David conquered and made a capital of the united kingdom of Israel (1 Chron. 11:5; Psalm 2:6; Isaiah 2:3).

The Heavenly City. The NT also refers to Zion as the New Jerusalem (Hebrews 12:22-24), the eternal city into which the church will be received (cf. Rev. 21-22).”
[Source: New Unger’s Bible Dictionary] 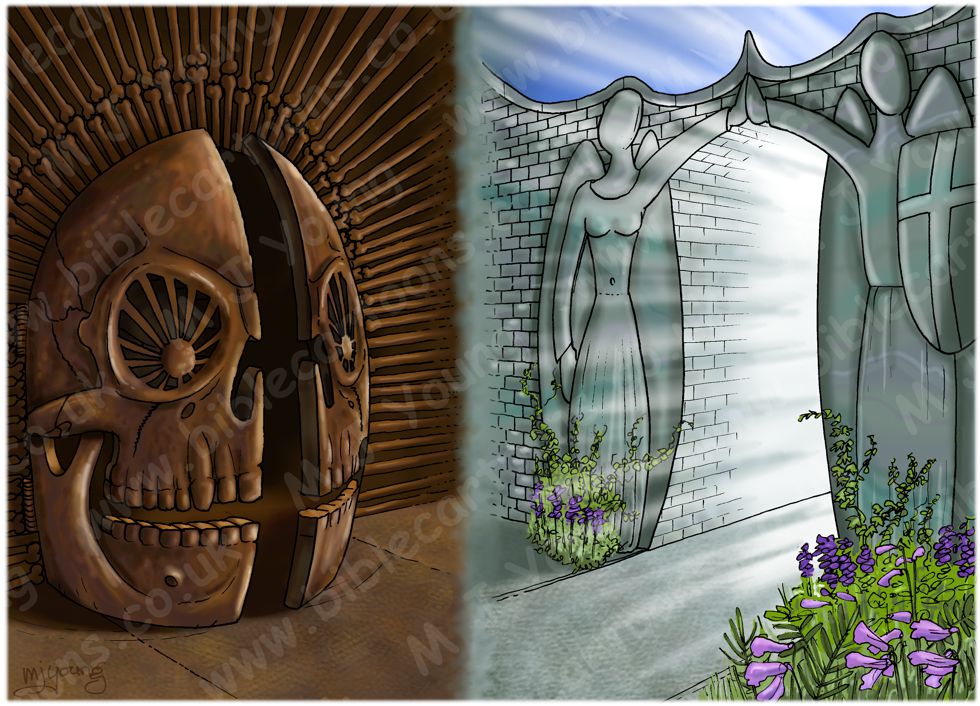 Scene without the figures, showing the two gates.