Bible Cartoon: Psalm 03 - How many are my foes! (Female version) 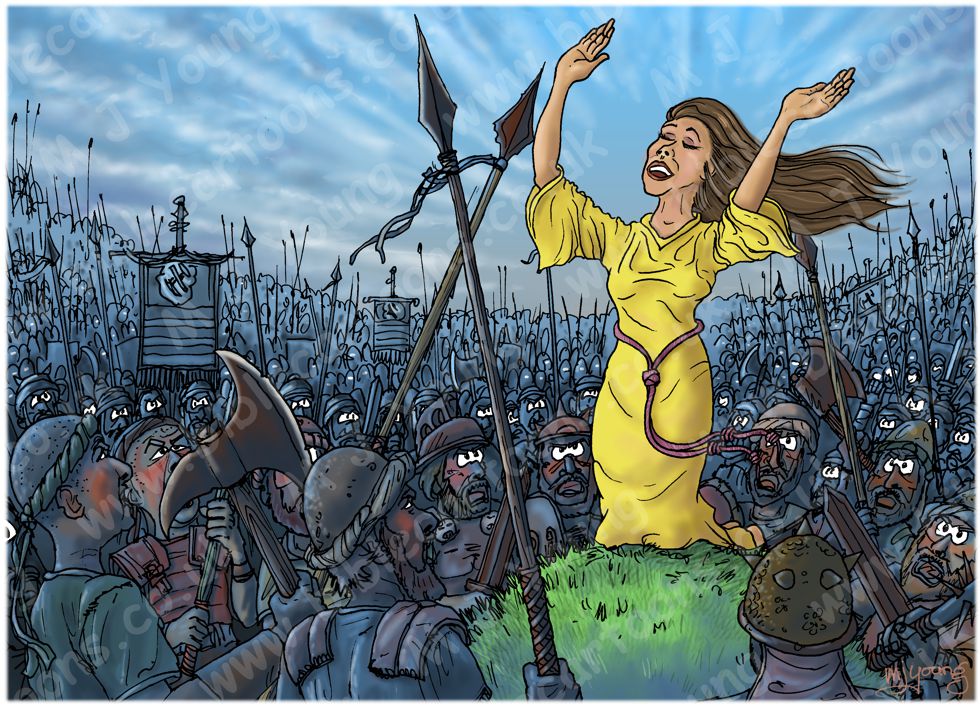 O Lord, how many are my foes!
How many rise up against me!
2 Many are saying of me,
“God will not deliver him.”

3 But you are a shield around me, O Lord;
you bestow glory on me and lift up my head. [2]
4 To the Lord I cry aloud,
and he answers me from his holy hill.

5 I lie down and sleep;
I wake again, because the Lord sustains me.
6 I will not fear the tens of thousands
drawn up against me on every side.

7 Arise, O Lord!
Deliver me, O my God!
Strike all my enemies on the jaw;
break the teeth of the wicked.

8 From the Lord comes deliverance.
May your blessing be on your people.

[1]
A word of uncertain meaning, occurring frequently in the Psalms; possibly a musical term, calling for a pause in the music.

LIGHTING NOTES:
General light on the left casts shadows to the right.

CHARACTERS PRESENT:
A woman kneeling in prayer, surrounded by a hostile army.

RESEARCH/ADDITIONAL NOTES:
Psalm 03 is an example of a lament, which is a cry out for help in a situation of distress or frustration. There are more lamentation psalms than any other type.

The only difference between the two versions is the sex of the praying person. I thought I would include both a man an a woman praying to give customers an option to buy which one they prefer.

Originally I was going to draw the scene from verse 7, with the picture focussing on the phrase “break the teeth of the wicked”, but I decided that would be a bit too violent!

Psalm 3 is a lament, which is a song about suffering. There are more psalms that are laments than any other type.

The psalm was written by King David, and begins with his lament: how many are my foes! In fact forces of the opposition (led by David’s son Absalom) had driven him from the palace in Jerusalem and were then surrounding him. Their taunt was that David had no hope of being delivered by God, which was their way of arrogantly saying “God has abandoned you David!”, which, of course, He hadn’t.

I thought it would be good to have the central figure kneeling in prayer, thus putting her trust completely in the Lord, despite the vast army surrounding her. The woman is looking particularly carefree, despite the horde of weapon-wielding villains surrounding her!