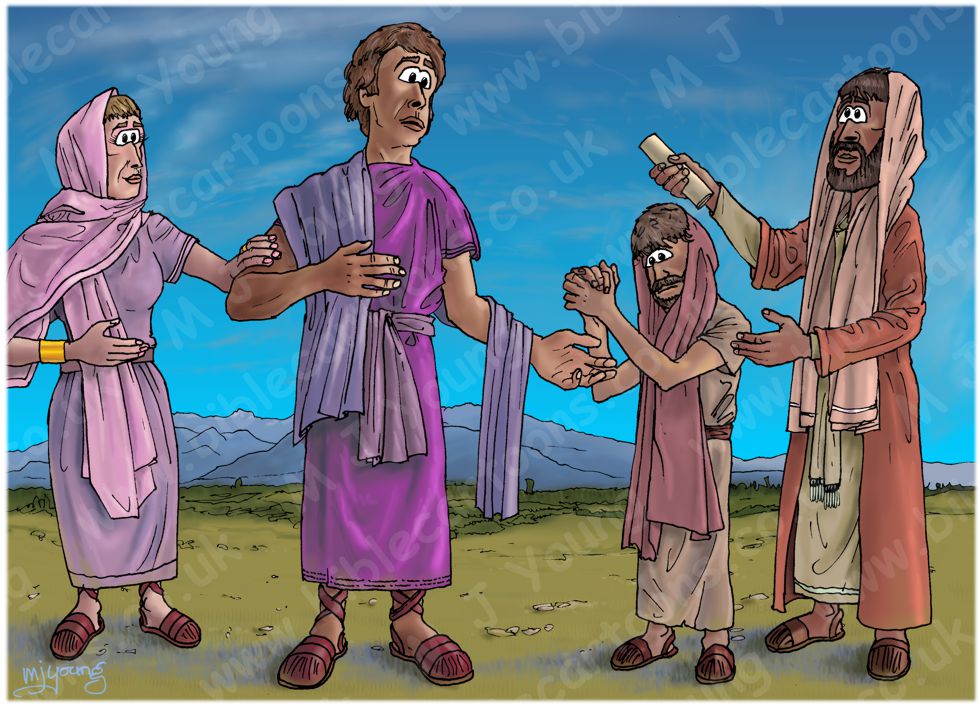 Philemon 1:8-25 (ANIV)
[Paul’s plea for Onesimus]
8 Therefore, although in Christ I could be bold and order you to do what you ought to do, 9 yet I appeal to you on the basis of love. I then, as Paul—an old man and now also a prisoner of Christ Jesus— 10 I appeal to you for my son Onesimus, [1] who became my son while I was in chains. 11 Formerly he was useless to you, but now he has become useful both to you and to me.
12 I am sending him—who is my very heart—back to you. 13 I would have liked to keep him with me so that he could take your place in helping me while I am in chains for the gospel. 14 But I did not want to do anything without your consent, so that any favour you do will be spontaneous and not forced. 15 Perhaps the reason he was separated from you for a little while was that you might have him back for good— 16 no longer as a slave, but better than a slave, as a dear brother. He is very dear to me but even dearer to you, both as a man and as a brother in the Lord.
17 So if you consider me a partner, welcome him as you would welcome me. 18 If he has done you any wrong or owes you anything, charge it to me. 19 I, Paul, am writing this with my own hand. I will pay it back—not to mention that you owe me your very self. 20 I do wish, brother, that I may have some benefit from you in the Lord; refresh my heart in Christ.
21 Confident of your obedience, I write to you, knowing that you will do even more than I ask.

LIGHTING NOTES:
Sunshine from the right (West) illuminates the figures & landscape, casting shadows to the left.

RESEARCH/ADDITIONAL NOTES:
This scene is a new type of illustration for me, one I call “a perception piece”. I have deliberately drawn Onesimus (a runaway slave) a lot smaller than the other figures, to reflect how he might have been feeling at this time: after months of journeying, he is finally standing in front of his master (Philemon, in purple clothing), wondering what will happen next. I imaged Onesimus might have been feeling vulnerable, perhaps afraid & worried about the reception Philemon might give him, so I have drawn Onesimus as a smaller figure than the others, reflecting his current perception of the situation.

It seems that Onesimus escaped from Philemon, possibly stealing to achieve his freedom. He made his way to the imprisoned Paul (whether in Rome or Caesarea Maritima (Israel)), who realized & probably convinced Onesimus that he had a responsibility to Philemon and should return to him. We know from Colossians 4:7-9 [2] that Tychicus was given the responsibility of carrying Paul’s letter from the imprisoned apostle to the Colossian church (that which we call the book of Colossians) & this personal letter to Philemon. Onesimus evidently travelled back with him.

The journey of Tychicus & Onesimus.
We know that the apostle Paul was imprisoned (after his 3 missionary journeys) in Caesarea Maritima (in Israel) for two years. After that Paul and his companions sailed for Rome to stand trial for his alleged crimes. There are two possible locations that Onesimus could have encountered Paul then: in Caesarea Maritima or in Rome. Once Onesimus agreed to return to Philemon in Colossae a long journey back was needed, either from Rome to Colossea, or else from Caesarea Maritima to Colossae.

In a straight line (as the crow flies) it is about 935 miles (1505 Km) from Rome in Italy to Colossae in modern-day Turkey. It is probable that Tychicus & Onesimus (there may have been more with them, but these two are the only ones mentioned by Paul in his letter to the Colossian church [1]) voyaged by ship around the coast of Italy & Turkey, possibly landing at Ephesus & travelling to Colossae. That whole journey would be 1400 miles (2255 Km) or longer!

In a straight line (as the crow flies) it is about 485 miles (780 Km) from Caesarea Maritima (in Israel) Colossae. It is not likely that such a straight route could be taken though! So it is about 750 miles (1207 Km) by sea (hugging the coastline) & travelling over land.

Regardless of the starting point, both of these journey’s seem amazingly long, were probably arduous & difficult, & probably took many months to achieve.

Who was Philemon?
Philemon (meaning “affectionate”) was a member of the church of Colossae (see below). He owed his conversion to the apostle Paul, based on the words in Philemon 1:19 “You owe to me even your own self as well”. He was probably a man of some means; had faith in Jesus & was celebrated for his hospitality (see Philemon 1:5-7). The Colossian church (Christians) or a part of it anyway (early house group?!) met at his house (see Philemon 1:2.)
Since Apphia and Archippus are mentioned in the same sentence as Philemon himself (verse 1), many commentators have concluded that these were Philemon’s wife & son respectively.

Who was Apphia?
Apphia means “That which is fruitful”.
This believer, belonging to Colossae, the ancient Phrygian city now a part of Turkey, is spoken of as our “dearly beloved” and “our sister” (rv, margin). It is likely that she lived out the significance of her name by being a fruitful branch of the Vine. Apphia is believed to have been the wife of Philemon and either the mother or sister of Archippus who was evidently a close member of the family. She must have been closely associated with Philemon, otherwise she would not have been mentioned in connection with a domestic matter (Philemon 1:2). Tradition has it that Philemon, Apphia, Archippus and Onesimus were stoned to death during the reign of Nero.
[Source: https://www.biblegateway.com/resources/all-women-bible/Apphia]

Who was Onesimus?
Onesimus means “Useful, beneficial, profitable”, a slave who, after robbing his master Philemon (q.v.) at Colosse, fled to Rome, where he was converted by the apostle Paul, who sent him back to his master with the epistle which bears his name. In it he beseeches Philemon to receive his slave as a “faithful and beloved brother.” Paul offers to pay to Philemon anything his slave had taken, and to bear the wrong he had done him. He was accompanied on his return by Tychicus, the bearer of the Epistle to the Colossians (Philemon 1:16, 18).

The story of this fugitive Colossian slave is a remarkable evidence of the freedom of access to the prisoner which was granted to all, and “a beautiful illustration both of the character of St. Paul and the transfiguring power and righteous principles of the gospel.”
[Source: Easton’s Bible Dictionary]

Who was Tychicus?
Tychicus means “chance”, an Asiatic Christian, a “faithful minister in the Lord” ( Ephesians 6:21 Ephesians 6:22 ), who, with Trophimus, accompanied Paul on a part of his journey from Macedonia to Jerusalem ( Acts 20:4 ). He is alluded to also in Colossians 4:7 , Titus 3:12 , and 2 Timothy 4:12 as having been with Paul at Rome, whence he sent him to Ephesus, probably for the purpose of building up and encouraging the church there.
[Source: Easton’s Bible Dictionary]

Where is Colossae?
Κολοσσαί, Kolossaí, (meaning “punishment”) was a city of Phrygia on the Lycus River (itself a tributary of the Meander river) situated about 12 miles (20 km) S.E. of Laodicea. Colossae was situated in a valley, overshadowed by Mt. Cadmus, 8,013 ft. high to the South. The city was built on a defensible hill & benefitted from being at the confluence of the great trade road from Ephesus (West) & Sardis (North West), which then led to the Euphrates River (in the East.)
Colossae is in modern day Turkey.

There were many Jews living there, and a chief article of commerce, for which the place was named & renowned, was the collossinus, which is a Latin name, meaning “purple wool.” I have shown Philemon & his wife in purple to reflect this local wool.

Colossae declined in importance & eventually became an unoccupied ruin, as it is today.

[2]
Colossians 4:7-9 (ANIV)
[Final greetings]
7 Tychicus will tell you all the news about me [Paul]. He is a dear brother, a faithful minister and fellow-servant in the Lord. 8 I am sending him to you for the express purpose that you may know about our [Some manuscripts, that He may know about your] circumstances and that he may encourage your hearts. 9 He is coming with Onesimus, our faithful and dear brother, who is one of you. They will tell you everything that is happening here.

View all Bible Cartoons in Philemon Go to Search by Bible Book page Do I need High or Medium qlty cartoons? FAQ’s