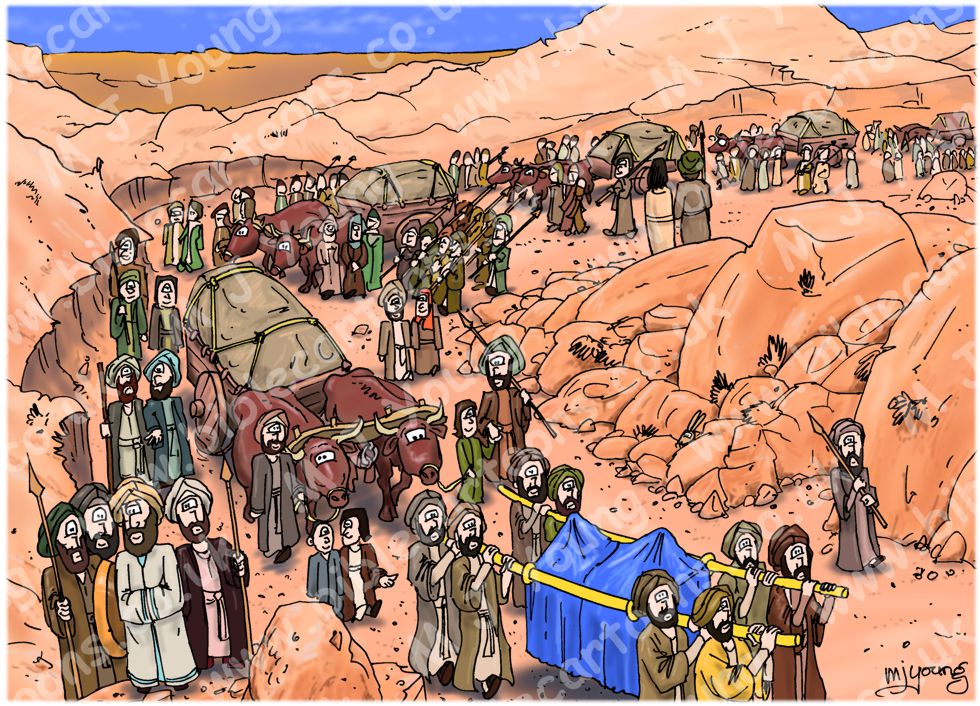 Numbers 7:1-9 (ANIV)
1 When Moses finished setting up the tabernacle, he anointed it and consecrated it and all its furnishings. He also anointed and consecrated the altar and all its utensils. 2 Then the leaders of Israel, the heads of families who were the tribal leaders in charge of those who were counted, made offerings. 3 They brought as their gifts before the Lord six covered carts and twelve oxen—an ox from each leader and a cart from every two. These they presented before the tabernacle.
4 The Lord said to Moses, 5 “Accept these from them, that they may be used in the work at the Tent of Meeting. Give them to the Levites as each man’s work requires.”
6 So Moses took the carts and oxen and gave them to the Levites. 7 He gave two carts and four oxen to the Gershonites, as their work required, 8 and he gave four carts and eight oxen to the Merarites, as their work required. They were all under the direction of Ithamar son of Aaron, the priest. 9 But Moses did not give any to the Kohathites, because they were to carry on their shoulders the holy things, for which they were responsible.

CHARACTERS PRESENT:
A Hebrew leader (not Moses) in the left foreground, with some soldiers carrying spears.
Various Hebrew people walking along beside the carts that carry the Tabernacle posts, bases, & various parts.
Notice the Kohathites carrying the ark of the covenant (wrapped in a blue cloth as prescribed by God in Numbers chapter 3) in the front of the walkers.

RESEARCH/ADDITIONAL NOTES:
This story occurred during part of the Exodus, when the Hebrew people left Egypt & headed into the desert wilderness. They were beginning to be forged into a new nation by God. Numbers chapter 3-4 outline the 3 Levite clans, the Gershonites, the Merarites, & the Kohathites & their special duties of carrying the tabernacle & holy items.

This cartoon took quite a long time to draw & colour, because of all the people!
This cartoon was created for a sermon at our church.


Bible Doctrine Notes
7:1-89 STEWARDSHIP, House of God (4.52A4)
The setting up of the House of God, followed by Moses sacred dedication of it, renewed the Hebrew people’s commitment to serve God. This Old Testament practices also serves as a model for churches, so that we celebrate our accomplishments in the service of God and use such celebrations to commit ourselves to the next tasks and to further acts of faithfulness.