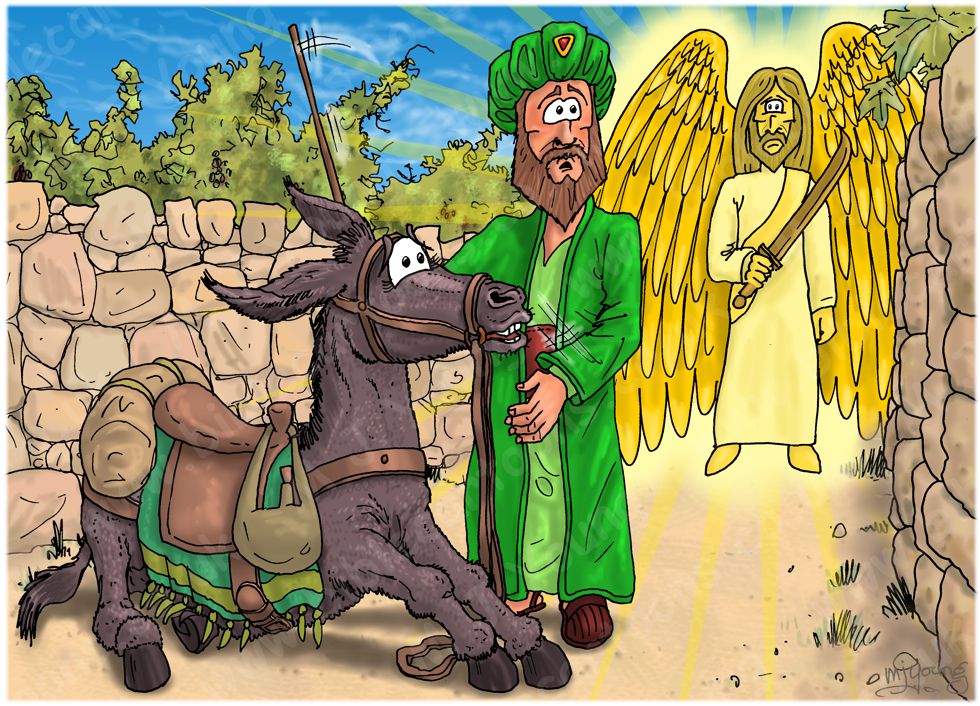 Numbers 22:28-30 (ANIV)
28 Then the Lord opened the donkey’s mouth, and she said to Balaam, “What have I done to you to make you beat me these three times?”
29 Balaam answered the donkey, “You have made a fool of me! If I had a sword in my hand, I would kill you right now.”
30 The donkey said to Balaam, “Am I not your own donkey, which you have always ridden, to this day? Have I been in the habit of doing this to you?”
“No,” he said.

TIME OF DAY:
Verse 21 tells us it is morning. This scene is shortly after the previous one.

LIGHTING NOTES:
There is simple lighting from above in this scene.

CHARACTERS PRESENT:
Balaam, son of Beor, his donkey, an angel of the Lord.

02) (Next page) Numbers 22 – Balaam’s Donkey – Scene 05 – Donkey speaks (Version 02). This version was originally drawn in 2014 for one of my “Bad Day” mugs, although it never actually got used on a mug. Notice that the blanket, saddle, water bag, etc present in the 2021 drawings in this set are all missing from Version 02, hence the need to draw Version 01, to maintain the continuity between all the scenes in this set.

In this scene Balaam son of Beor has stopped beating his donkey, and is talking to it instead. His head & body are just turning around, as the donkey indicates the presence of the angel of the Lord, & God is just about to opens Balaam’s spiritual eyes, so he can perceive the angel for himself (see verse 31).

I imagine Balaam was a bit surprised when his donkey spoke to him, with quite a reasonable argument too! Even so, Balaam threaten the poor donkey still further. Immediately after this most unusual conversation, Balaam gets to see the angel; the reason his donkey wouldn’t go any further along the road (see Scene 06).

I decided to use the same background & angel figure that I used in Numbers 22 – Balaam’s Donkey – Scene 04 – Lying down, in this picture, which saves me some time, and aids the continuity between scenes as well!