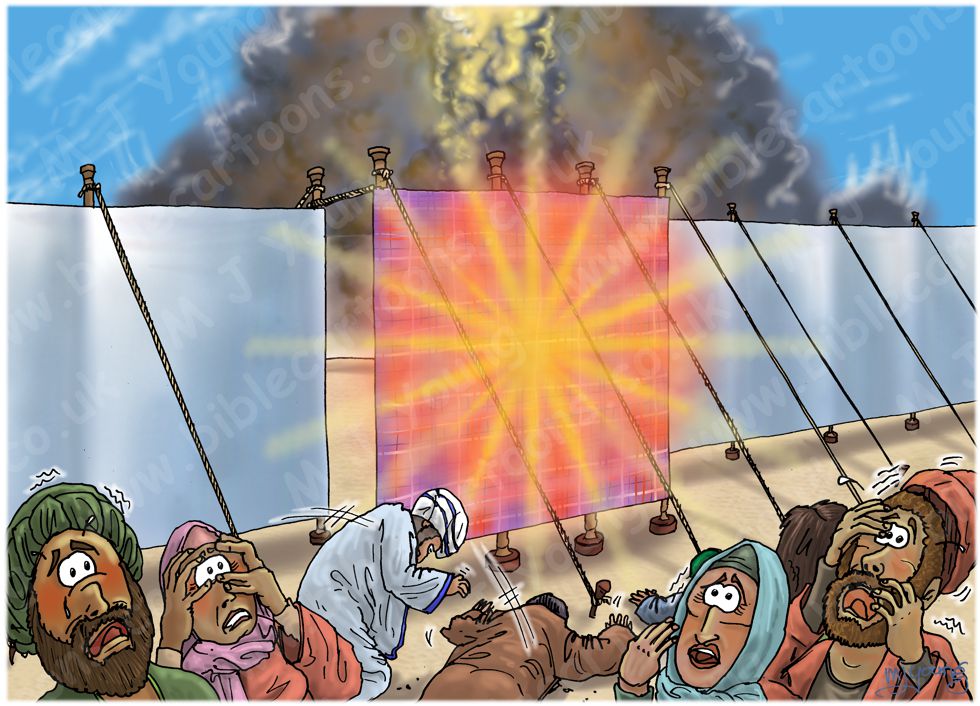 Numbers 16:42-45 (ANIV)
42 But when the assembly gathered in opposition to Moses and Aaron and turned towards the Tent of Meeting, suddenly the cloud covered it and the glory of the Lord appeared. 43 Then Moses and Aaron went to the front of the Tent of Meeting, 44 and the Lord said to Moses, 45 “Get away from this assembly so that I can put an end to them at once.” And they fell face down.

TIME OF DAY:
The Bible tells us this scene is set the next day, but not at what time. I image it being mid morning, just after the previous scene.

LIGHTING NOTES:
Sunlight (above and to the right) illuminates this scene, casing shadows to the left of the figures.

CHARACTERS PRESENT:
In the middle foreground, from left to right is Moses (in pale blue outer robe) kneeling & just about to fall face down; Aaron (in brown outer robe) & just visible is a small part of Joshua, son on Nun (in green scarf & turban), both of whom are already prostrate on the ground.
Various people in the foreground represent panic-striken Hebrew people, worried about the sudden appearance of the glory of the Lord God.

I have used the same background (of the Tabernacle courtyard) which I drew for a previous scene: Numbers 16 – Korah’s rebellion – Scene 08 – God’s fire consumes 250 men. I have lowered the courtyard, to allow more room for the cloud in this scene 11 though. I had toyed with the idea of placing a very feint outline of God (either just head, or whole body) in the centre of the picture, but it didn’t look right, so I deleted it. The presence & glory of the Lord God is symbolically represented by the bright star shape in the centre of the illustration.