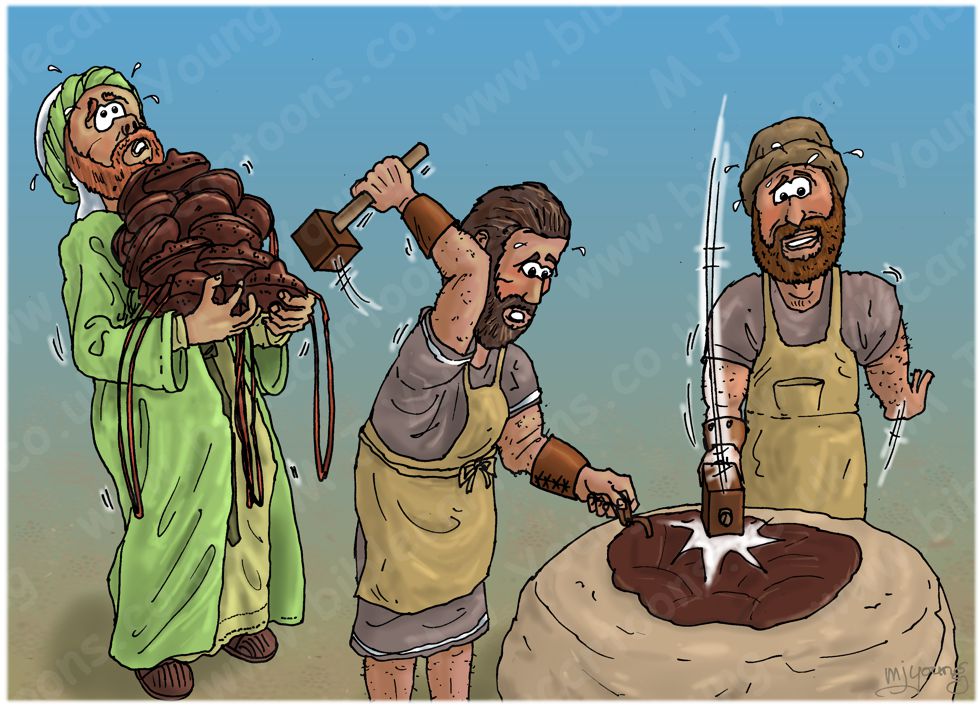 Numbers 16:36-40 (ANIV)
36 The Lord said to Moses, 37 “Tell Eleazar son of Aaron, the priest, to take the censers out of the smouldering remains and scatter the coals some distance away, for the censers are holy— 38 the censers of the men who sinned at the cost of their lives. Hammer the censers into sheets to overlay the altar, for they were presented before the Lord and have become holy. Let them be a sign to the Israelites.”

39 So Eleazar the priest collected the bronze censers brought by those who had been burned up, and he had them hammered out to overlay the altar, 40 as the Lord directed him through Moses. This was to remind the Israelites that no-one except a descendant of Aaron should come to burn incense before the Lord, or he would become like Korah and his followers.

TIME OF DAY:
Some time after the previous scene, perhaps in the mid afternoon.

LIGHTING NOTES:
Sunlight (above and to the right) illuminates this scene, casing shadows to the left of figures and objects.

RESEARCH/ADDITIONAL NOTES:
Eleazer must have had a strong stomach, since he had to pick his way through the burnt remains of 250 rebel leaders, picking up their bronze censers! Here we see him bringing some of them to two un-named blacksmiths, who are hammering the bronze censers flat with hammers. This scene takes place before the Iron Age, so blacksmiths of the time wouldn’t have had iron anvils to help their work. These two blacksmiths are using a suitable large and flat stone as an anvil, in order to flatten the censers and then cover the altar of the Lord.

Aaron the priest (brother of Moses) had four sons: Nadab the firstborn, and Abihu, Eleazar, and Ithamar. Nadab and Abihu were killed by supernatural fire when they offered unauthorized fire to the Lord, disobeying his instructions (see Leviticus 10). Of the two that remained, we know more about Eleazar, who succeeded his father Aaron as high priest of Israel.