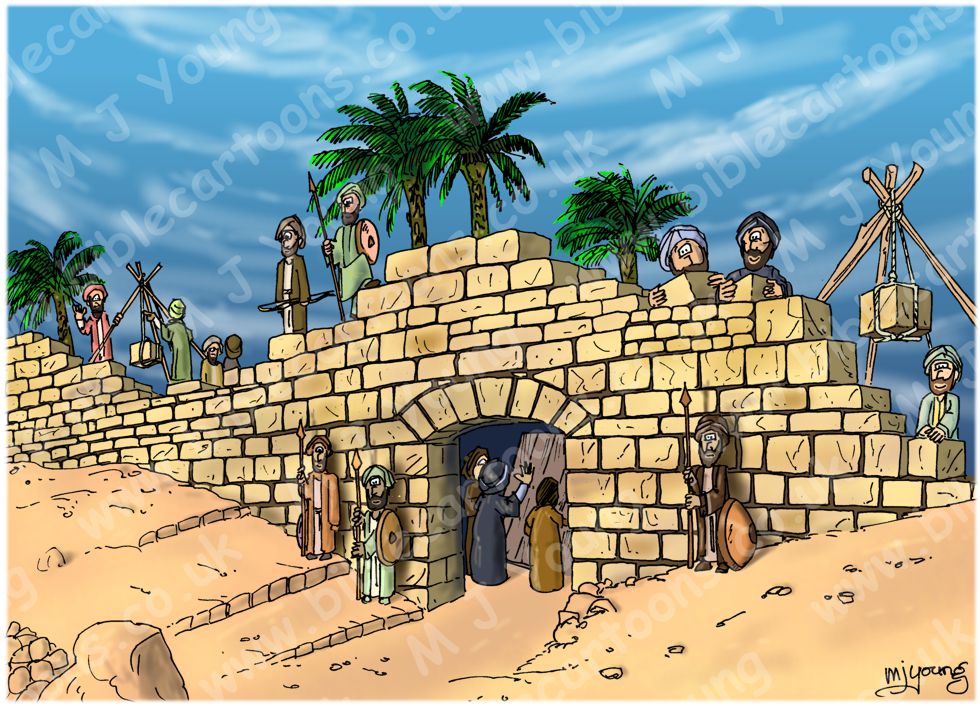 3 The Fish Gate was rebuilt by the sons of Hassenaah. They laid its beams and put its doors and bolts and bars in place. 4 Meremoth son of Uriah, the son of Hakkoz, repaired the next section. Next to him Meshullam son of Berekiah, the son of Meshezabel, made repairs, and next to him Zadok son of Baana also made repairs. 5 The next section was repaired by the men of Tekoa, but their nobles would not put their shoulders to the work under their supervisors. [1]

6 The Jeshanah [2] Gate was repaired by Joiada son of Paseah and Meshullam son of Besodeiah. They laid its beams and put its doors and bolts and bars in place. 7 Next to them, repairs were made by men from Gibeon and Mizpah—Melatiah of Gibeon and Jadon of Meronoth—places under the authority of the governor of Trans-Euphrates. 8 Uzziel son of Harhaiah, one of the goldsmiths, repaired the next section; and Hananiah, one of the perfume-makers, made repairs next to that. They restored [3] Jerusalem as far as the Broad Wall. 9 Rephaiah son of Hur, ruler of a half-district of Jerusalem, repaired the next section. 10 Adjoining this, Jedaiah son of Harumaph made repairs opposite his house, and Hattush son of Hashabneiah made repairs next to him. 11 Malkijah son of Harim and Hasshub son of Pahath-Moab repaired another section and the Tower of the Ovens. 12 Shallum son of Hallohesh, ruler of a half-district of Jerusalem, repaired the next section with the help of his daughters.

13 The Valley Gate was repaired by Hanun and the residents of Zanoah. They rebuilt it and put its doors and bolts and bars in place. They also repaired five hundred yards [4] of the wall as far as the Dung Gate.

14 The Dung Gate was repaired by Malkijah son of Recab, ruler of the district of Beth Hakkerem. He rebuilt it and put its doors and bolts and bars in place.

28 Above the Horse Gate, the priests made repairs, each in front of his own house. 29 Next to them, Zadok son of Immer made repairs opposite his house. Next to him, Shemaiah son of Shecaniah, the guard at the East Gate, made repairs. 30 Next to him, Hananiah son of Shelemiah, and Hanun, the sixth son of Zalaph, repaired another section. Next to them, Meshullam son of Berekiah made repairs opposite his living quarters. 31 Next to him, Malkijah, one of the goldsmiths, made repairs as far as the house of the temple servants and the merchants, opposite the Inspection Gate, and as far as the room above the corner; 32 and between the room above the corner and the Sheep Gate the goldsmiths and merchants made repairs.

[5]
Hebrew, Shelah, a variant of Shiloah, that is, Siloam.

TIME OF DAY:
The text doesn’t specify a time of day, so I’ve set it at about mid morning.

LIGHTING NOTES:
Sunlight, coming from above the scene.

CHARACTERS PRESENT:
No one specific to the story.

RESEARCH/ADDITIONAL NOTES:
The particular gate in my cartoon is referred to as the Dung Gate in the Bible (verse 14.) The only research I carried out was an internet search for images of the Dung Gate, in the walls of Jerusalem. I imagine the Hebrew people used some sort of wooden scaffolding, or hoists to lift the heavier stones of the wall, as it grew higher, into place. These can be seen in my cartoon as well.
In the next chapter we read that the rebuilding of the walls of Jerusalem were opposed by a man called Sanballat. Nehemiah, the prophet, countered this potential military opposition by having his workers carry weapons with them – spears, swords, bows, armour & shields. These can be seen with the figures on & before the wall.

View all Bible Cartoons in Nehemiah Go to Search by Bible Book page Do I need High or Medium qlty cartoons? FAQ’s