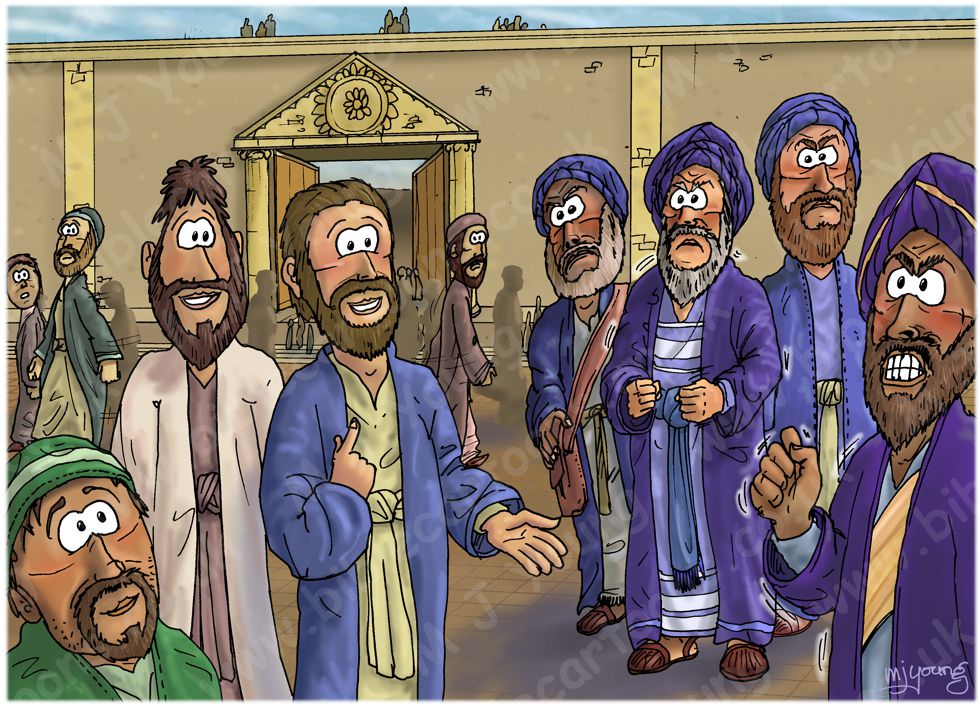 Matthew 21:40-46 (ANIV)
[Jesus said] 40 “Therefore, when the owner of the vineyard comes, what will he do to those tenants?”
41 “He will bring those wretches to a wretched end,” they replied, “and he will rent the vineyard to other tenants, who will give him his share of the crop at harvest time.”

42 Jesus said to them, “Have you never read in the Scriptures:
“ ‘The stone the builders rejected
has become the capstone; [1]
the Lord has done this,
and it is marvellous in our eyes’? [2]

43 “Therefore I tell you that the kingdom of God will be taken away from you and given to a people who will produce its fruit. 44 He who falls on this stone will be broken to pieces, but he on whom it falls will be crushed.” [3]
45 When the chief priests and the Pharisees heard Jesus’ parables, they knew he was talking about them. 46 They looked for a way to arrest him, but they were afraid of the crowd because the people held that he was a prophet.

[3]
This verse is omitted in some early manuscripts.

LIGHTING NOTES:
The sun (unseen on the right) illuminates this scene, casting shadows to the left of objects and people.

CHARACTERS PRESENT:
Jesus is wearing his usual blue outer robe and pale inner robe, and is pointing to himself, I the centre left of the scene.
Simon-Peter stands behind Jesus, wearing his usual pale outer robe & red-brown inner robe.
Some chief priests and Pharisees are standing on the right of the picture, looking cross and incensed at Jesus’s words.
Various people in the background.

RESEARCH/ADDITIONAL NOTES:
This scene is set in the court of the Gentiles, the outer courtyard of the Temple in Jerusalem. We know that Jesus was here because Matthew 21:23 states, “23 Jesus entered the temple courts, and, while he was teaching, the chief priests and the elders of the people came to him.”

In the background you can see one of the entrances to the inner courtyards of the Temple, with various people going in and out. There are even people on the flat rooftop, looking down.
I have drawn small tiles as the flooring of the courtyard the action of this scene takes place in.

This is the final scene in my “Wicked tenants” series. In it you can see Jesus talking about the cornerstone/capstone and pointing to himself, identifying himself with it. I enjoyed making the expressions of the chief priests and Pharisees look cross, annoyed, fuming, angry, etc. They were offended by Jesus’s claims about himself and who he was, and also because they realised he was identifying them as being the wicked tenant farmers in his parable.

When Jesus says, ‘The stone the builders rejected has become the capstone (or cornerstone),’ he is referring to Psalm 118:22-23. Jesus himself was the capstone/cornerstone, and clearly he was rejected by the builders (the religious leaders of the Jews) because they had him crucified. We know that the priests and leaders knew Jesus was talking about them, because in Matthew 21:45 we read, ‘When the chief priests and the Pharisees heard Jesus’ parables, they knew he was talking about them.’
The chief priests and the Pharisees would have liked to have had Jesus arrested there and then, but they feared the crowds of people, who hung on Jesus’s every word.

“The psalmist, perhaps the congregation’s leader, may have thought of his king as the stone, for in Israel kings often represented the nation. Certainly in Jesus’ Parable of the Landowner and the Tenants (Matt. 21:33-44) He applied the psalm in that way. Jesus is the Stone and the Jewish leaders, the builders of the nation, had rejected Him. But God made Him the Capstone. Thus the kingdom would be taken from them and given to others (Matt. 21:43). The fact that this psalm was probably popular at the Passover festival made Jesus’ use of it all the more forceful”
[Source Bible Knowledge Commentary]

Matthew 21:40-42 (MSG)
[Jesus said] 40 “Now, when the owner of the vineyard arrives home from his trip, what do you think he will do to the farmhands?”
41 “He’ll kill them—a rotten bunch, and good riddance,” they [The Pharisees] answered. “Then he’ll assign the vineyard to farmhands who will hand over the profits when it’s time.”
42 Jesus said, “Right—and you can read it for yourselves in your Bibles:
The stone the masons threw out
is now the cornerstone.
This is God’s work; we rub our eyes, we can hardly believe it!”